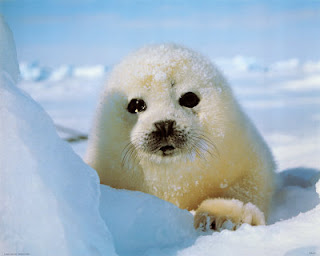 The bad news is that if the thin ice conditions continue, then the mature seal population will shortly collapse as replacement becomes impossible.  I hate to say this, but eliminating the cull will be irrelevant.  This is a nasty natural event that the predators have no say in.

The wild seal harvest is a barely used resource to start with and one that happens to be the mainstay of the Arctic lifeway, but not of course the fishermen in the .

Harvesting while the population is contracting in this case is likely plausible although it is a rare conclusion for such cases.  This is effectively salvage harvesting.   One presumes a smaller stock could survive a sustained period of low ice as they appear to have done so in the past.

The seal harvest has received unceasing media pressure for decades and it is always hard to defend any wild harvest from the natural emotional appeal generated by the images generated.  Yet this harvest gathers attention that more rightly needs to be applied to establishing an international wild harvest husbandry protocol that every operator adheres to.

A key aspect of such a protocol would be the establishment of natural refugia plausible representing as mush as half the natural fishing grounds world wide.

The study, by scientists from and the International Fund for Animal Welfare, was the first to track declining sea ice cover in all four harp seal breeding grounds in the – with devastating effect.

David Johnston, research scientist at the Duke University Marine Lab, said: "The kind of mortality we're seeing in eastern is dramatic. Entire year classes may be disappearing from the population in low ice years. Essentially all of the pups die."

Satellite records of ice conditions since 1979 showed that ice cover had fallen by as much as 6% every decade. The research is published in the journal PLoS ONE.

The loss of sea ice – and its threat to the future of seal populations – has been confirmed by Canadian government scientists, the International Fund for Animal Welfare said.

Up to 80% of the seal pups born in 2011 were thought to have died because of lack of ice, according to the department of fisheries and oceans. The study adds additional weight to the long campaign by animal protection groups against the seal hunt.

IFAW said on Thursday that should work towards ending the commercial seal hunt for good, compensating the hunters and retraining them for other jobs.

"It is time for the Canadian government to face the reality that the commercial sealing is neither viable nor necessary," the organisation said.

Female harp seals depend on stable winter sea ice as a safe place to give birth and nurse their young, until the pups are grown enough to hunt on their own. The seals typically seek out the thickest, oldest patches of sea ice each February and March.

The seals are able to adapt to short-term changes in ice conditions, said. But it was unclear the animals would be able to make a long-term move to new breeding grounds with more stable ice, such as those off east Greenland.

Thousands of seals still return each year to their traditional breeding grounds in the Gulf of St Lawrence or off – despite the declining ice.

"There's only so much ice out there, and declines in the quantity and quality of it across the region, coupled with the earlier arrival of spring ice breakup, is literally leaving these populations on thin ice," Johnston said. "It may take years of good ice and steady population gains to make up for the heavy losses sustained during the recent string of bad ice years in eastern ."

Thanks for taking the time to discuss this. I feel strongly about it and love learning more on this topic. If possible, as you gain expertise, would you mind updating your blog with more information? It is extremely helpful for me. Thanks!