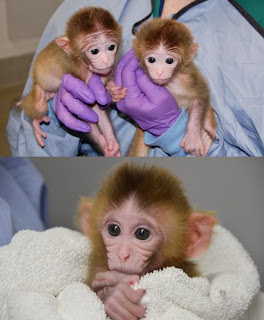 We are slowly getting better at all this.  A chimera is a creature formed from the cells of two separate individuals, in this case of the same species.  In folklore, it is extended to include two separate species which we can not yet rule out.

I do not think that chimeras have any real place in our future except in the odd sophisticated experiment.

Yet I have made the conjecture that the cheetah was plausibly a created life form made by combining the chromosomes of a cat and a dog into one creature.  I do not expect this to actually stand up but it remains untested.  Two things suggest the possibility.  The chromosome count is a simple addition of the cat and dog chromosome count itself.  The second thing is that genetic work on the cheetah shows us that the line went through a genetic crisis 40,000 years ago in which only a few members existed.

That just happens to coincide with the first rise of modernism among humanity on Earth and the first establishment of the necessary ability.  It is reasonable that we could pull something like this of in the next twenty years ourselves.

Those following my blog will know that our present human world was kicked off with an agricultural base, around ten thousand years ago after the Pleistocene Nonconformity of 12,900 years ago ended the Ice Age and flooded out the continental shelf.  The earlier rise of humanity established modernism around 40,000BP and was responsible for the Pleistocene Nonconformity itself.

ScienceDaily (Jan. 5, 2012) — Newly published research by scientists at provides significant new information about how early embryonic stem cells develop and take part in formation of the primate species. The research, which took place at OHSU's , has also resulted in the first successful birth of chimeric monkeys -- monkeys developed from stem cells taken from two separate embryos.

The research was conducted to gain a better understanding of the differences between natural stem cells residing in early embryos and their cultured counterparts called embryonic stem cells. This study also determined that stem cell functions and abilities are different between primates and rodents.

Here's more information about the early primate stem cells that were studied: The first cell type was totipotent cells -- cells from the early embryo that have the ability to divide and produce all of the differentiated cells in the placenta and the body of organism. These were compared with pluripotent cells -- cells derived from the later stage embryo that have only the ability to become the body but not placenta.

In mice, either totipotent or pluripotent cells from two different animals can be combined to transform into an embryo that later becomes a chimeric animal. However, the current research demonstrated that for reasons yet unknown, chimeric animals can only develop from totipotent cells in a higher animal model: the rhesus macaque. OHSU showed this to be the case by successfully producing the world's first primate chimeric offspring, three baby rhesus macaques named Roku, Hex and Chimero.

"This is an important development -- not because anyone would develop human chimeras -- but because it points out a key distinction between species and between different kind of stem cells that will impact our understanding of stem cells and their future potential in regenerative medicine," explained Shoukhrat Mitalipov, Ph.D., an associate scientist in the Division of Reproductive and Developmental Sciences at ONPRC.

"Stem cell therapies hold great promise for replacing damaged nerve cells in those who have been paralyzed due to a spinal cord injury or for example, in replacing dopamine-producing cells in Parkinson's patients who lose these brain cells resulting in disease. As we move stem cell therapies from the lab to clinics and from the mouse to humans, we need to understand what these cells do and what they can't do and also how cell function can differ in species."

The and the National Institutes of Health funded the research.