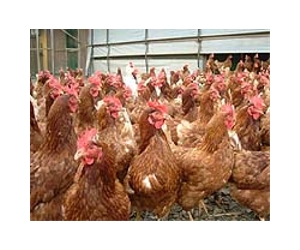 A complex Genomic rearrangement is the revealing phrase here. It is no longer a simple switch which deludes us into thinking we understand something.  Instead it is an unfathomable rearrangement that somehow causes change throughout the organism.

As our knowledge of detail improve as our ability to understand declines.

I have been able to construct a biological logic from what little we can describe that may end up been fruitful, but I am skeptical that our understanding of the logical operators will ever prove easy.  One sees the shape of a system but not the working hands.

A complex genomic rearrangement causes a fascinating phenotype in chickens in which a massive expansion of pigment cells not only makes the skin and comb black, but also results in black internal organs

A new study describes how a complex genomic rearrangement causes a fascinating phenotype in chickens in which a massive expansion of pigment cells not only makes the skin and comb black, but also results in black internal organs.

Published in PLoS Genetics, researchers at , the of Agricultural Sciences, , and investigated the genetic basis of fibromelanosis, a breed characteristic of the Chinese Silkie chicken.

"We have shown that the genetic change causing fibromelanosis is a complex rearrangement that leads to increased expression of Endothelin 3,a gene known for promoting the growth of pigment cells," explains Ben Dorshorst, one of the authors.

The genetic changes underlying the evolution of new species are still poorly understood. For instance, we know little about critical changes that have happened during human evolution. Genetic studies in domestic animals can shed light on this process due to the rapid evolution they have undergone over the last 10,000 years.

The research group, led by Leif Andersson, has characterized a number of traits in domestic animals, and a clear trend is emerging: genomic rearrangements have contributed significantly to the rapid evolution of domestic animals.

"We have good reason to believe that such rearrangements have also played a significant role in the evolution of other species, including ourselves," concludes Leif Andersson.