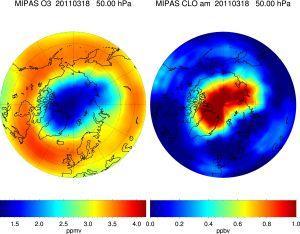 We discover here that a cooling of the stratosphere will generate an ozone hole.  Perhaps it is plausible that the original cause of the hole in the Antarctic was caused by the naturally much cooler temperatures there?

My core difficulty some thirty years ago when the Antarctic ozone hole was first observed, was that we had no earlier data to compare it with in the first place to even know if the hole was unusual at all.  Yet a movement blew up to remove apparent causations from the atmosphere that was astonishingly successful.

You can see from this item that we are still having serious issues in defining what is presently happening in the .  Do you care to speculate on just how reliable our understanding and data happens to be for the Antarctic?

What we appear to be establishing is a real cause and effect relationship that can be tracked.  Cold means something!

Extraordinarily cold temperatures in the winter of 2010/2011 caused the most massive destruction of the ozone layer above the Arctic so far: The mechanisms leading to the first ozone hole above the North Pole were studied by scientists of the KIT Institute of Meteorology and Climate Research (IMK). According to these studies, further cooling of the ozone layer may enhance the influence of ozone-destroying substances, e.g. chlorofluorocarbons (CFC), such that repeated occurrence of an ozone hole above the has to be expected.

About a year ago, IMK scientists, together with colleagues from , detected that ozone degradation above the for the first time reached an extent comparable to that of the ozone hole above the South Pole. Then, the KIT researchers studied the mechanisms behind. Their results have now been published in the journal "Geophysical Research Letters."

According to IMK studies, occurrence of the Arctic ozone hole was mainly due to the extraordinarily cold temperatures in the ozone layer that is located at about 18 km height in the stratosphere, i.e. the second layer of Earth's atmosphere. There, chlorine compounds originating from chlorofluorocarbons (CFC, e.g. greenhouse gases and refrigerants) and other pollutants are converted chemically at temperatures below -78°C. These chemical conversion products attack the ozone layer and destroy it partly. One of the main statements in the study: If the trend to colder temperatures in the stratosphere observed in the past decades will continue, repeated occurrence of an Arctic ozone hole has to be expected.

The team of IMK researchers analyzed measurements of the chemical composition of the atmosphere by the MIPAS satellite instrument developed by KIT. In addition, model calculations were made to determine concrete effects of further cooling of the ozone layer. "We found that further decrease in temperature by just 1°C would be sufficient to cause a nearly complete destruction of the Arctic ozone layer in certain areas," says Dr. Björn-Martin Sinnhuber, main author of the study. Observations over the past thirty years indicate that the stratosphere in cold Arctic winters cooled down by about 1°C per decade on the average. According to Sinnhuber, further development of the ozone layer will consequently be influenced also by climate change. He points out that the increase in carbon dioxide and other greenhouse gases will warm up the bottom air layers near the ground due to the reflection of part of the thermal radiation by the bottom layer of the atmosphere towards Earth's surface, but also result in a cooling of the air layers of the stratosphere above, where the ozone layer is located.

After the first discovery of the Antarctic ozone hole in the mid-1980s, CFCs were rapidly identified to be the cause and their use was prohibited by the Protocol of 1987. However, it will take decades until these substances will have been removed completely from the atmosphere. "Future cooling of the stratosphere would enhance and extend the impacts of these substances on the ozone layer," says Dr. Björn-Martin Sinnhuber. It is now necessary to study potential feedbacks on climate change.

The present study is embedded in long-term programs of IMK in this field. In December, the researchers started a new measurement campaign in the Arctic ozone layer in using a high-altitude aircraft. Again, they encountered extraordinarily low temperatures. However, it is not yet possible to predict whether temperatures will be low enough over a longer term to cause a comparably large degradation of ozone in this winter.