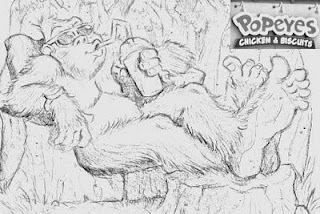 This encounter is actually useful.  The sasquatch is noteworthy for a couple of reasons:

It was around six foot tall.  There are plenty of observations of extra tall creatures and few noted as normal.  I suspect that the height average in the South just happens to be smaller.

The impossibly broad shoulders are the real giveaway if one did not have a good look at the ape face.  We are catching more frontal views and the ape appearance is characteristic.

The speed of the retreat is also noteworthy and is an impossibility for anything else.  During early days, I wondered if the animal actually put on bursts of speed or merely long paced its way out.  Since then we have had a few sprints observed.

And finally we catch one of them raiding our garbage.  I suspect he will be back to catch some of that chicken.  These animals are extremely shy, but burgeoning populations and public awareness making an accidental shooting unlikely has allowed them to be way more comfortable around us.

I am expecting to see interaction begin sooner or later as they learn to find trustworthy partners.  This fishing around our garbage is a great start and yes setting out treats will slowly win their trust.

I received this interesting anecdote a few days ago. I don't doubt the witness' account...but the situation is somewhat whimsical:


Hey - I wanted to tell you a story that happened to me this pass week. I walk my dog everyday on a nature trail. I'm located south of . I'd like to be anonymous but here goes.


I was walking her a few nights ago probably around 7 at night and when we made the turn she started growling which for my dog is unusual. So I turned on my flash light and there digging in a trash can was this big dark brown colored thing. Now these trash cansare hooked above ground - about 4 and a half feet above ground - and they are wide enough that I can fit my whole body in. I'm 6'1" 260 pounds and this thing was about my height maybe slightly taller but was wide. His head and part of his shoulder was in but what freaked me out came next when my dog barked he looked at us and it had the face of what I can say was gorilla like. His eye shine was red in my mag lite and the smell was like a stinkbug and rotten eggs. He was probably no less than 20 - 30 feet from me and when he ran off his speed was incredible. No way anyone in a suit playing games can move like this. It was like once he wanted to leave he was gone, I mean I cant even try to estimate his speed even if I wanted. I had my pistol and I fired 2 rounds into the ground just to make noise because I was freaked at this point.


I have never heard of anyone claiming to see something like this before. I'm from a small town so I guess if they did they probably wont say anything so not to be made fun of or labeled as crazy. The next day I went back and seen the trash bag messed up and seen they had Popeye's biscuits and some other fast food in the can so I am going to go get some more fast food put it in the garbage cans and stake out with a bud of mine and see if I can get any evidence. I gotta see this again. It was life changing for me. I can't get the face and broadness of the shoulders of this thing out of my head since it happened but I have to say I seen a Bigfoot. But on TV I seen people say these things are 8 to 9 feet tall but the one I seen was probably and a half tops but wide broad line backer like.

If you ever heard of anyone from southern  report anything like this please write me back. I heard stories of the    Monster but that is in the area. Thanks.
Posted by arclein at 12:01 AM