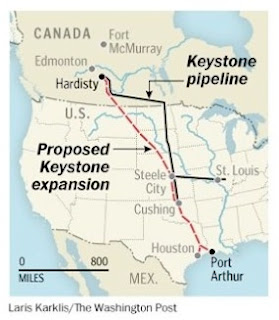 This writer completely misses the real point behind this huge pipeline project(s).  It is all about outright exiting the international oil market just as soon as they are able.  treasure has been poured into every rat hole on the planet in order to feed our market for oil products.  That has meant that the tail far too often got to wag the dog and Americans suffered.

This pipeline system and the rapid growth of shale oil in and the is now rapidly reversing this story.

Certainly oil production is dangerous and messy at times.  Perhaps we should have our accidents and messes in were killing thousands will go unnoticed?  The reality is that we are still relying on oil today.  I think that this is about to change totally and soon except I cannot guarantee that outcome and until we all can we must protect our supplies.  The absolute best way is this pipeline.

With that going ahead, Chavez and his cohorts become beggars as they should.  Rich beggars, yes, but with zero leverage over us.  The real dividend will be the abrupt contraction of the financial strength of the Arab World that will then have to truly modernize.

Rejecting the Keystone pipeline is just smart politics.Photo: Tar Sands ActionPresident Obama must decide by Feb. 21 whether to approve or reject the proposed Keystone XL pipeline, his hand forced by a Republican rider to the bill that extended the payroll-tax cut. The White House said straight-up that if Republicans forced a quick decision, the president would reject the pipeline permit. But in an election year, nothing is straight-up, so the latest game of conjecture in the chatter-o-sphere is whether Obama will stick to his guns.\

A while back I questioned the wisdom of a "top environmentalist" who spent time with journalist Jeff Goodell gaming out scenarios for how greens might get screwed on Keystone after all. I called the scenario in question "tactically and strategically asinine."
Goodell (by the way: everyone read Jeff Goodell) posted a follow-up last week aboutthreats from the oil industry to make Keystone an election-year wedge issue. The American Petroleum Institute, headed by long-time fossil-fuel shill Jack Gerard, has launched a well-funded "vote 4 energy" campaign that will,according to Gerard, refuse to accept "anything less than approval or acquiescence" on Keystone.

Anyway, Goodell says that Big Oil's threats put Keystone back in play, because "Obama's political advisers care more about winning the election than reducing 's addiction to oil, protecting drinking water supplies in from toxic oil spills, and cutting the carbon pollution that is cooking the planet." He invokes Michael Corleone's famed quote from The Godfather: "Luca Brasi held a gun to his head and my father assured him that either his brains or his signature would be on the contract."

A couple things. I don't think there's anything wrong with Obama's advisers concerning themselves with his reelection. Of all the things Obama can realistically hope to do to reduce 's addiction to oil and the rest of it, the biggest and most realistic is getting reelected. The alternative is Mitt Romney. Blah blah two-party duopoly blah, but there it is.

The issue in question is whether there is in fact a choice between nixing the pipeline (like the administration has said it would) and getting Obama reelected. I don't think there is. I think the gun Jack Gerard is holding to Obama's head is firing blanks. That's why it's tactically and strategically asinine to give in to his bullying.

Here's what will happen if the State Department rejects the Keystone permit: The dirty-energy caucus -- Big Oil, congressional Republicans, and various conservative foot soldiers -- will bash Obama for being a job-killing pinko who hates energy. Coincidentally, that's also what it's done since the day Obama took office, even as he's repeatedly opened up more offshore drilling, overseenrecord-high oil production, taken a hands-off approach to the shale gas boom, cleared the way for more than 2.3 billion tons of coal to be mined from public lands, and single-handedly saved the U.S. auto industry. That is what the dirty-energy caucus will do until the day Obama leaves office, no matter what energy policies he adopts. Its opposition is a fixed quantity.

Obama has been trying, in energy as in so many other areas, to meet his opponents "in the middle," to take "common sense" measures that can win the support of "both sides." It has gained him nothing -- no support from the dirty-energy caucus, not even a diminution in intensity of opposition. When he issued permits for deepwater drilling in the , after the BP spill, an API spokesperson sniffed, "We look forward to the day when a single permit on plan doesn't merit a press conference by the Secretary of the Interior." The dirty-energy caucus does not want this or that permit, oil rig, or mine; they want Obama out of office.

Until recently, it seemed Obama would take his failing meet-in-the-middle strategy to the political grave with him. Thankfully, on the economy he seems to have finally given up on getting any GOP cooperation and instead is trying to draw clear contrasts for voters and do what he can with the executive branch.

He could do the same thing on energy generally and Keystone specifically. It's not hard to draw a clear contrast. One side wants to allow Chinese oil companies to use (and pollute) 's land in order to facilitate the export of filthy Canadian oil back to . In exchange for this favor to oil company executives and shareholders (the overwhelming beneficiaries), the will get a few thousand temporary jobs, if any. Mostly the pipeline will just sit there, as pipelines are designed to do, pumping oil from Canada out into the world market with no particular benefit to most Americans and great cost to the ones on whose land the oil periodically spills. (The real case against the pipeline is rather more nuanced, of course, but this is not about the real case, it's about the simple, accessible, public case.)

There will be a flurry of attack ads and Fox News denunciations if Obama rejects the pipeline, of course. But November is a looong way away. There will be dozens of similar five-minute hates from the right before it's all over. By the time the election rolls around, the only ones who remember Keystone (or Solyndra) will be committed partisans on both sides, and we already know how they're going to vote.

The fact is, Keystone just isn't that big of an issue, at least in terms of its proximate impacts on average Americans. Lots of pundits and wannabe political strategists think pro-oil policy is a way to "reach out to independents," but the teeming mass of swing-voter independents is largely a mythand most voters don't vote based on "issues" at all.
As for unions, sure, some of them want the meager jobs Keystone would create, but it's not their top priority, not something that will swing their support for or against Obama. The building trades care much more about preserving the Davis-Bacon Act, which Romney has vowed to repeal. The Teamsters have bigger fish to fry, like their battle with Fed-Ex. They'll make some noise about Keystone, but it's hardly going to be a pivotal. Obama has other ways to mollify them -- see, e.g., hisrecess appointments to NLRB last week.

Politically speaking, Keystone is a relatively faint signal amidst a cacophony of noise. The only ones who will hear it will be partisans paying close attention. If Obama approves it, the signal will be to the dirty-energy caucus that it can successfully bully him. (Think they'll stop with Keystone?) If he rejects it, the signal will be to his progressive base that he is worthy of their enthusiasm.

The main lesson of post-truth politics is that craven sellouts are not only craven, they don't work. Acting like a frightened loser is not good politics. It's not savvy. It's not "realistic." It's not hard-boiled or tough-minded or far-sighted or unsentimental. It's cowardly, and voters don't like cowards.