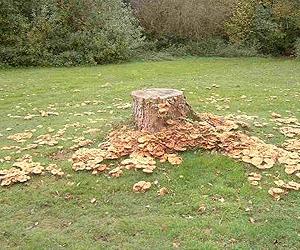 This is certainly unexpected but should not have been.  Lead is the one natural mineral that is immobile in soils and is a natural marker associated with mineralization generally.  Metals like zinc and copper want to disperse throughout the environment and are never as strong as a comparable lead signal.  It thus makes sense for the local fungi to find a way to neutralize the lead atoms as they are not going away.

It is also a reminder of just how amazing fungi and molds and their like are in soils.  It is rarely noted but often the best solution for the recovery of polluted soils is to feed them well and blend them better and then let all those microorganisms go to work.  Soon enough the soil will be largely repaired.

Of course it is never that simple, but a protocol something like this can often be worked out with careful preliminary testing.

The good news is that we can stop worrying all about all that lead shot delivered into the environment by duck hunters.  In time it will also be broken down and made safe.  We also now know were all that lead ended up when it was used in gasoline.

In tackling lead pollution, fungi may be our friends

While not all species of fungus are able to transform lead in this way, it appears that many of them can. It's not entirely clear why some fungi do this, but it might assist their survival in contaminated soils.

Fungi may be unexpected allies in our efforts to keep hazardous lead under control. That's based on the unexpected discovery that fungi can transform lead into its most stable mineral form.

The findings reported online in Current Biology, a Cell Press publication, suggest that this interaction between fungi and lead may be occurring in nature anywhere the two are found together. It also suggests that the introduction or encouragement of fungi may be a useful treatment strategy for lead-polluted sites.

"Lead is usually regarded as a pretty stable substance," said Geoffrey Gadd of the . "The idea that fungi and other microbes may attack it and change its form is quite unexpected."

Lead is an important structural and industrial material and, as an unfortunate consequence of its popular use in everything from fire arms to paint, lead contamination is a serious problem worldwide.

There have been efforts to contain lead in contaminated soils through the addition of sources of phosphorus, an element that enables the incorporation of lead into a stable pyromorphite mineral. But that change had been considered a purely chemical and physical phenomenon, not a biological one. That is, until now.

In the new study, the researchers carefully examined lead shot after it had been incubated with and without fungi. In the presence of fungi, the lead shot began to show evidence of pyromorphite formation after one month's time.

That stable lead-containing mineral continued to increase in abundance with time. Minerals found on the surface of lead shot incubated without fungi represented less stable forms as a result of normal corrosion.

"It seems the ability of many fungi to produce organic acids or other substances may be very important in attacking the lead and releasing forms of free lead including lead complexes, which can then react with phosphorus sources to form pyromorphite," Gadd explained.

While not all species of fungus are able to transform lead in this way, it appears that many of them can, he added. It's not entirely clear why some fungi do this, but it might assist their survival in contaminated soils.

The discovery is yet another example of the "amazing things that fungi, and microbes more generally, can do in the environment," says Gadd. "Even metals can be subject to microbial colonization and attack."
Posted by arclein at 12:01 AM