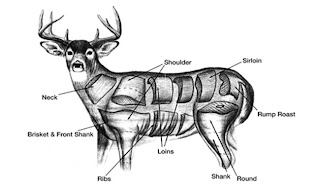 This is a strong reminder that we need to update our deer harvesting practices rather badly.  They were put in place when it looked like the local farm boys were going to drive the deer into extinction.  Today, they truly need to be harvested and the meat needs to be properly hung and ultimately butchered.  This means it is time to simply allow a formal commercial harvest aimed at managing the stock and providing a true market supply.

Doing that, we may even begin to take good care of the herds and possibly introduce more commercially valuable deer.  The woodlands and yes the fields do provide ample fodder for a substantial whose damage is manageable provided one harvests over a set level.

The same system needs to be applied to wild turkeys as well.

All in there is plenty of potential game meat that can be sustainable harvested and which needs now to be harvested as we are unlikely to invite wolves and bears back unto our school yards and back yards.

Doe, a deer, a sustainable protein source to last all winter

Oh, deer.Photo:  I am not a hunter. I don't (and will not) own a gun and, though I've toyed with the idea of bow hunting in the past, my aim really stinks. Even so, the deer population where I live does need to be thinned, since we've taken their natural predators away.

And I sure do appreciate a good venison steak.

So while chatting with our neighbors who hunt this fall, my partner, Brian, and I hatched a plan. Two of our ewes were being culled because they had health issues that were impacting their abilities to be good mothers, but would not impact the quality of their meat. We decided to trade the meat from one of the ewes for some venison.

Here in Nebraska does are not in short supply -- in fact, many hunters are after a trophy buck and the state has to push hunters to shoot their female counterparts. Having many more does than bucks is not only bad for the raw population numbers -- because one buck can sire many offspring in a season -- it's also bad for the genetics of the wild herd. This year, the Game and Parks Commission was giving out "antlerless" deer permits, and our neighbor took one for himself and an extra for us.

The opening day of deer season arrived, and by noon my neighbor had bagged a huge doe. Many laborious hours later, he had steaks and ground meat waiting in the freezer for his family to eat this winter. We stopped by as he was finishing up, and he told us he was headed out again the following morning, and would call me if he shot another doe.
Sure enough, my phone rang the next day before noon, and he let me know he had another deer in his truck and was coming home from the courthouse where he'd registered her. I was to meet him in a half hour in his dad's machine shed so I could learn for myself how a deer becomes venison.

I arrived to find the truck already in the shed, and I'll admit I was a little apprehensive. When it comes time to handle raw meat in my house, it's rarely me who volunteers. I was a vegetarian for many years, and there is definitely something a little unpleasant about the sensation. But I'm not one to shy away from the task at hand, especially when it comes to harvesting my own food. So I came prepared -- with a small hunting blade and my newly honed kitchen knives.

I peered in the back and saw a smaller doe, field dressed with dark eyes that reminded me of the many trophy heads I'd seen decorating country bars. I was expecting to feel guilt or sadness -- but instead I felt gratitude. I touched her head briefly, closed my eyes, and thanked her. The deer's sacrifice would feed us well all winter, perhaps longer.

Through the next four hours, I lost all the squeamishness I've ever had for handling meat. And I learned a few of the skills that hunters have been perfecting for millennia, such as: where to cut so that the deer can hang evenly, how to skin the animal, how to use an animal's anatomy to make the carving job easier. I'll be frank -- my inner scientist came out to play. Mammalian bodies are fascinating, and I got very familiar with how muscles look, feel, and behave. I also learned what muscle looks like when it gets pulverized by a bullet, and how to avoid tainting meat with spinal tissue (which can be dangerous because it can be the source of Chronic Wasting Disease, a relative of Mad Cow). It took two of us four hours to carve the deer, and another couple hours to grind the meat with the help of a KitchenAid.

Brian and I have already had some venison in a pasta casserole that was quite tasty, as were the burgers I made when my parents visited -- per usual, I put too much garlic in them. The tenderloin steaks we grilled that first night weren't very good. Perhaps it's because of the way it was killed -- one of the benefits of gun vs. bow hunting is that guns can be faster, but unless the death is instantaneous, the adrenaline that pumps through the deer can affect the quality and taste of the meat. Arrows, on the other hand, though more difficult to achieve a kill, are much quieter. A skilled hunter can down a deer without scaring the animal.

Either way, I'm thankful for the sustenance and hopeful that, because of the record hunting season, I'll see fewer deer dead on the side of the road this winter.

Steph Larsen lives in Lyons, Nebraska, where she and her partner are "part-time farmers," growing food for themselves and their community. Steph holds a master's degree in geography from her home state of Wisconsin and serves on the board of the Women, Food and Agriculture Network.