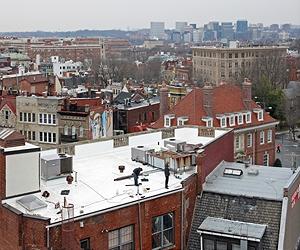 The problem is to get a correct measure.  The most important time is during summer when one is mostly impacting the air conditioning system or its lack thereof.  Importantly the buildings are noticeably cooler and that is all one really needs as a user.

The key is to avoid the underlying structure itself from absorbing the solar energy and leaving us with a warmed structure that then will overheat in spots as the sun hits the building during the day.  Paint may well be just enough.

Better still is to simply mount solar panels insulated with air from the building.  That way the sun is both absorbed and reflected.

Even white painted panels installed several inches off the roof should do an excellent job, and since they are on the roof anyway they may as well be load bearing for folks to walk on and to sunbath on also.  Thus is discovered a new amenity for buildings.  A sunbathing deck with open access.

The research monitored the temperatures of five test buildings at the of 's Campus for their performance with and without white coatings. The buildings with white roofs experienced significantly cooler temperatures, both on the exterior and interior.

The research assesses the benefits of white roofs and aims to help residential, commercial and industrial building owners determine if white roofs are suitable for their buildings and guide them through the best materials to use.

Lord Mayor Robert Doyle said Council had already put the research into practice by trialling a white roof on its ArtPlay building.

"There has been a lot of talk about the energy consumption benefits of white roofs and we commissioned the University of Melbourne to undertake this research so we could get a local perspective on how white roofs can work in our city," the Lord Mayor said.

Councillor Cathy Oke, Chair of the Future (Eco-City) Committee said commercial buildings in the City of would benefit most from this tool.

Dr Dominique Hes, a senior lecturer at the University of Melbourne in sustainable architecture and lead author of the research explained that when painted white, roofs are able to reflect heat away from the building rather than absorbing it.

"Reflective white paint on commercial building roofs reduces the energy used to cool the building. 's CBD has over 3,500,000m2 of lettable commercial space. If the roofs of these buildings were painted white, the city could in theory reduce its CO2 emissions by 4.5 million MJ per year, 1.5 million kilos of CO2 or 3 million black balloons," Dr Hes said.

"White roofs are a low cost solution in making buildings more sustainable, particularly for our older buildings. And if our air conditioners are not working as hard, there are financial benefits for buildings owners as well."

The research monitored the temperatures of five test buildings at the of 's Campus for their performance with and without white coatings. The buildings with white roofs experienced significantly cooler temperatures, both on the exterior and interior.

To access information about white roof benefits and available products, visit www.1200buildings.com.au or talk to your local paint provider.

The research, commissioned by the City of , was undertaken as part of the 's "Reduction in thermal load on buildings from retrofitted roof surfaces".

It looks neat. Indeed, putting some solar panels makes great use of that harsh sunlight, considering that the roof's structure seems perfect for that purpose. I'll consider these type roof painting once I'm about to start my renovation plans.

Having white roof is a trend today… It's because of the rising concern with the environment. If this was invented and studied a long time ago, I guess everyone would be on it right now.

This is good news. If having a green roof is proven to be effective in reducing temperature in buildings, just imagine the implications this research would have on overall energy consumption. In the long run, it is the environment that stands to benefit from any reduction in energy consumption.

Nice Article. White roof is one of the best roofing option for summer. Flat white roof does not absorb heat and reflect sunlight while black absorb heat a lot.