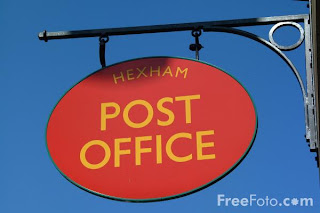 What is poorly understood is that a banker really does not want the small deposit business because it is the principal source of costs while if someone merely funded the other side of every loan it gets nice and easy.  I think it is called investment banking.

Retail banking is a burden but it is also the price paid to hang out your shingle.  Needless to say a tug of war ensues that is worked out over the generations between regulators and bankers to push the envelope.  Our present situation is derived completely from that natural push.

Governments who created all this money in the first place need badly to pull it back and the post office is long proven to be an excellent place to do it at the federal level.  It needs to also be done at the State level but that is a different story.

The rules were clear after 1933.  Investment banking, brokering and retail banking were three separate businesses that stood alone and did not tinker with each others capital.   That separation alone prevents human nature from doing what it does best.   Speculate!

Until the 1933 – 1998 regime is put back into play and the post office and the States participate in the retail banking business, the US economy will be terrible vulnerable

Neither rain nor sleet nor snow may have stopped the Pony Express, but the nation’s oldest and second largest employer is now under attack. Claiming the Postal Service is bankrupt, critics are pushing legislation that would defuse the postal crisis by breaking the backs of the postal workers’ unions and mandating widespread layoffs. But the “crisis” is an artificial one, created by Congress itself.

In 2006, Congress passed the Postal Accountability Enhancement Act (PAEA), which forced the USPS to put aside billions of dollars to pay for the health benefits of employees, many of whom hadn’t even been hired yet. Over a mere 10 year period, the USPS was required to prefund its future health care benefit payments to retirees for the next 75 years, something no other government or private corporation is required to do. As consumer advocate Ralph Nader observed, if PAEA had never been enacted, USPS would now be facing a $1.5 billion surplus.

The USPS is a profitable, self-funded venture that is not supported by the taxpayers. It is funded with postage stamps—one of the last vestiges of government-issued money. Stamps are fungible and can be traded at par; and they are backed, not by mere government “fiat,” but by labor. One stamp will buy the labor to transport your letter 3000 miles.

The USPS is one of the few businesses the government is allowed to operate in competition with private companies; it is the only U.S. agency that services all its citizens six days per week; and it is perhaps the last form of communication that protects privacy, since tampering with it is against federal law. In 1999, it employed nearly a million people; and today, it employs over 600,000. Where are those workers to go, when the post office is no more?

To Downsize or Diversify?

Whatever caused the financial woes of the USPS, there is another way to mitigate the crisis than slashing employee benefits and customer services. In a December 21st article in Reader Supported News, Tim Fernholz suggested that instead of focusing on cuts, the post office should approach the problem from a business perspective and find a new way to make money. One way to keep the USPS alive, he says, is for it to include basic banking services in its product line, providing a “public option” in banking:

[R]oughly 9 million Americans don't have a bank account and 21 million rely largely on fringe financial services like usurious check cashers rather than traditional financial institutions. Giving low-income people access to a safe banking system will firm up their economic futures.

Banking in post offices is not new. Many countries, including , , , , and , have a long and successful history of it; and so does the .

From 1911 to 1967, the Postal Savings System provided a safe and efficient place for customers to save and transfer funds. It issued Postal Savings Bonds in various denominations that paid annual interest, as well as Postal Savings Certificates and domestic money orders. The U.S. Postal Savings System was set up early in the 20th century to attract the savings of immigrants accustomed to saving at post offices in their native countries, provide safe depositories for people who had lost confidence in private banks, and furnish more convenient depositories for working people than were provided by private banks. (Post offices were then open from 8 a.m. to 6 p.m. six days a week, substantially longer than bankers’ hours.) The postal system paid two percent interest on deposits annually. The minimum deposit was $1 and the maximum was $2,500. Savings in the system spurted to $1.2 billion during the 1930s and jumped again during World War II, peaking in 1947 at almost $3.4 billion.

The Postal Savings System was shut down in 1967, not because it was inefficient but because it was considered unnecessary after private banks raised their interest rates and offered the same governmental guarantees that the postal savings system had.

Postal banks are now thriving in , not as a historical artifact but as a popular new innovation. When they were instituted in 2002, it was not to save the post office but to save families and small businesses from big-bank predators. By 2001, Australian mega-banks controlled some 80% of ’s retail banking. Profits went abroad and were maximized by closing less profitable branches, especially in rural areas. The result was to place hardships on many families and small businesses.

The government decided to launch a state-owned bank that would compete with the Aussies. They called their new bank Kiwibank after their national symbol, the kiwi bird. But the government team planning the new bank faced major challenges. How could they keep costs low while still providing services in communities throughout ?

Back in 2002, we launched with a thought: needs a better banking alternative—a bank that provides real value for money, that has Kiwi values at heart, and that keeps Kiwi money where it belongs—right here, in .

So we set up shop in PostShops throughout the country, putting us in more locations than any other bank in literally overnight (without wasting millions on new premises!).

Suddenly, New Zealanders had a choice in banking. In an early “move your money” campaign, they voted with their feet. In an island nation of only 4 million people, in its first five years Kiwibank attracted 500,000 customers away from the big banks. It consistently earns the nation’s highest customer satisfaction ratings, forcing the Australia-owned banks to improve their service in order to compete.

Postal Banking Japan-style: Funding the Government’s Debt with Its Own Bank

Another interesting model is Japan Post Bank, now the largest publicly-owned bank in the world. Japan Post is also the largest holder of personal savings, making it the world’s largest credit engine. Most money today originates as bank loans, and deposits are the magic pool from which this credit-money is generated. Post uses its excess credit power to buy government bonds. By 2007, it was the holder of one-fifth of the nation’s debt. As noted by Joe Weisenthal, writing in Business Insider in February 2010: Because 's enormous public debt is largely held by its own citizens, the country doesn't have to worry about foreign investors losing confidence. If the Postal Service were to add commercial banking to its product line, it too could use its own bank-generated credit to help relieve its debt problems. The USPS is being forced to fund the health care costs of its employees for 75 years into the future, and a large portion of this unreasonable burden is composed of interest charges. According to German researcher Margrit Kennedy, interest composes on average about 40% of the cost of all goods and services. That suggests that eliminating interest could reduce the USPS debt by about 40%. If the USPS became a bank, it could use the credit generated from customer deposits either to service its own debt directly—something that would effectively be interest-free, since it would own the bank and would get the profits back—or by buying interest-bearing government bonds. The interest earned on the bonds could then be used to pay the interest on the USPS debt.

Other government agencies and local governments could improve their balance sheets in the same way. Public institutions with sizeable capital and revenues can cut their infrastructure costs by about 40% by establishing their own banks, allowing them to avoid a massive toll in interest to private banker middlemen.

The Postal Service is a venerable institution that is older than the Constitution. It should be saved, and it can be saved. One way is to support HR 1351, a bill introduced by Rep. Stephen Lynch of to repeal the Postal Accountability Enhancement Act.

Another way is for the post office to combine mail services with teller services, restoring the Postal Savings System of an earlier era. The result could be not only to save the Post Office but to establish a competitive alternative to a runaway Wall Street banking monopoly that even Congress seems unable to control. ______________

Ellen Brown is an attorney and president of the Public Banking Institute, http://PublicBankingInstitute.org  In Web of Debt, her latest of eleven books, she shows how a private cartel has usurped the power to create money from the people themselves, and how we the people can get it back. Her websites are http://WebofDebt.com and http://EllenBrown.com.
Posted by arclein at 12:01 AM