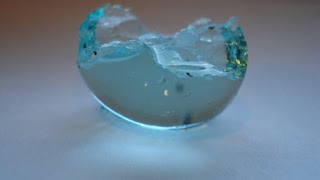 A couple of months past, I did an off the wall post speculating on the plausibility of slime moulds forming bubbles of methane and then lofting into the stratosphere to reside.  Slime moulds certainly have the capacity to form odd plant like structures and the like so producing a balloon would work well.  Residing in the stratosphere puts them well above the turbulent part of the atmosphere and assuming the capacity to adapt to the supposedly harsh conditions there allows it all to work.  I thought it a little farfetched, but now we have this odd item.

This gel needs to be checked to see if it is slime mould.  It makes sense that a descending balloon creature would recompact itself to allow it to descend to the Earth and survive.

In fact such gels have most certainly been observed in the past but never appearing so noteworthy. A small fallen gel in the grass would naturally be assumed rightly to be a local event.  For all we know it has been raining gel balls forever without any particular notice.

Hopefully someone will put these under a microscope to confirm that they are slime moulds.

In the meantime my of the wall conjecture drawn by the apparent life vacuum in the stratosphere is beginning to grow conforming evidence not least because I know that I should be looking.

A man in has been left mystified after tiny blue spheres fell from the sky into his garden.

Steve Hornsby from said the 3cm diameter balls came raining down late on Thursday afternoon during a hail storm.

He found about a dozen of the balls in his garden. He said: "[They're] difficult to pick up, I had to get a spoon and flick them into a jam jar."

The Met Office said the jelly-like substance was "not meteorological".

Mr Hornsby, a former aircraft engineer, said: "The sky went a really dark yellow colour.
"As I walked outside to go to the garage there was an instant hail storm for a few seconds and I thought, 'what's that in the grass'?"

Walking around his garden he found many more blue spheres were scattered across the grass.

He said: "The have an exterior shell with a softer inner but have no smell, aren't sticky and do not melt."

Mr Hornsby said he was keeping the balls in his fridge while he tried to find out what they were.

"These have been implicated in previous 'strange goo' incidents," she said. "I'd have thought it's a little early for spawning but I suppose we've had a very mild winter.

"The transmission of eggs on birds' feet is well documented and I guess if a bird was caught out in a storm this could be the cause."
Posted by arclein at 12:01 AM