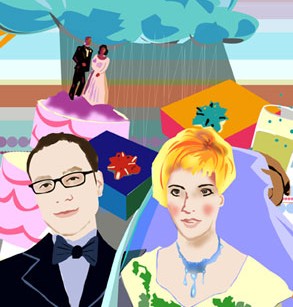 I cringe of course to touch this topic, but a few things need to be said.  Marriage exists in all societies to a greater or lesser degree and works to accommodate the biological needs of the human species first.  A natural adjunct is that it also works to optimize the economic effectiveness of the two individuals.  So far so good except for the unfortunate effect of individual variability in which it is also asked to somehow accommodate the full spectrum of human behavior.

There never has been a golden age for human marriage.  As our present society transitions to a vastly different global society, it is hardly surprising that all the old ways are presently in serious turmoil.  The hard part is to first emotionally let go of the past itself.

The future of marriage will reflect a completely new set of human compromises that allows society to fully support child rearing and adult development through a century long life.  Once one accepts that the debate is about the shape of the future and how to manage and optimize that future, then progress is plausible.

My own thoughts are toward a radically different economic model that wraps a human community of around a natural one hundred and fifty individuals whose lifeway is integrated around a primary agricultural unit that retains a self contained internal currency regime that allows all members to readily optimize their contribution and supply them their financial anchor when pursuing a life outside of the home community.  Such a system implies a deeper more woven community and a rethink of marriage as an institution.  My instinct is to perfect the economic basis and allow the social institutions to sort themselves out.

Any other approach will perpetuate present problems and fail to eliminate obvious shortcomings.  At least we may reduce remaining problems to that solely related to human nature itself.

Only 51 percent of American adults are married - a record low - down from 72 percent in 1960, according to a analysis of census data. There are three major factors behind these trends.

First, the number of never-married Americans nearly doubled, from 15 percent to 28 percent, between 1960 and 2010. Pew said that many couples are cohabiting instead of marrying because "they fear divorce." Why? Many are adult children of divorce who do not want to live through such pain again.

Second, the number of divorced and un-remarried people has grown from 5 percent to 14 percent of the population.

What's troubling is not the later age at which people marry, which is generally wise, but the fact that only 72 percent of today's adults have ever married, versus 85 percent in 1960.

Those numbers suggest a strategy for churches, which perform nine of 10 weddings: Make a case for marriage from the pulpit. True, there aren't many cohabiting couples in church, but millions of churchgoing parents of adult children do not know what to say to them. What arguments might pastors make about the value of marriage?

I recommend that clergy read "The State of : Marriage in America 2011. " Its co-authors are W. Bradford Wilcox of the National Marriage Project at the University of Virginia and Elizabeth Marquardt of the Institute for American Values' Center for Marriage and Families. Their report, "When Baby Makes Three," provides evidence of what every pastor has believed: "Couples who both agree that 'God is at the center of our marriage' are at least 26 percentage points more likely to report that they are 'very happy.' " While 50 percent of men and women report being very happy, of those who believe God is at the center of their marriage, 77 percent of women and 76 percent of men are very happy.

Similarly, mothers and fathers who see parenting as one of "life's greatest joys" are about twice as likely to report being very happy in their marriages. However, the report cautions that "parenthood is typically associated with lower levels of marital happiness." Having a baby requires sacrifices, such as a loss of sleep, less disposable income and often less quality time with one another, resulting in less sex.

And there is a sad paradox among young Americans. While most would like to have two or three children, "a growing share of young women and men believe that a good marriage is personally unattainable, and more are raising children outside of marriage."
However, the report provides new evidence that both husbands and wives (but wives especially) are "more likely than their childless peers to feel their lives have a sense of meaning and purpose." And a substantial minority of married couples do not experience parenthood as an obstacle to marital happiness.

What is their secret? Two answers are shared housework chores and sexual satisfaction. One surprise is that the happiest wives and husbands today "are those with no children and those with four or more children." Another factor is education. Americans without college degrees are three times as likely to divorce in the first 10 years of marriage compared with those with college education.

But most important is a shared faith that endows marriage "with transcendent significance." Attending services together is a top predictor of marital stability. Finally, "parenthood makes life meaningful and marriage makes parenthood bearable."

Mike McManus is president of Marriage Savers,www.marriagesavers.org. He wrote this for The Sun