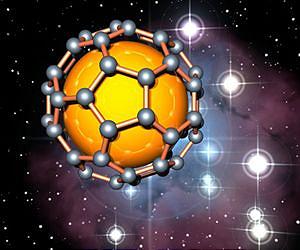 This item reminds us that there is a lot of chemistry out there that is poorly understood because it cannot be accurately observed and measured.  This technology will apparently allow us do that a lot better.

Here it has led to the understanding of reaction behavior of pollutants in the atmosphere which will be welcome.

Perhaps it will now become possible to investigate the ionic behavior of biologically active water.  I have made a related conjecture that conforms to established empirical evidence, but otherwise quite unprovable. Been able to use this described technology to actually determine more detail would be a good start.

It could launch a lot of new science .

Researchers discover particle which could cool the planet

In a breakthrough paper published in Science, researchers from The of , The and Sandia National Laboratories report the potentially revolutionary effects of Criegee biradicals.

These invisible chemical intermediates are powerful oxidisers of pollutants such as nitrogen dioxide and sulfur dioxide, produced by combustion, and can naturally clean up the atmosphere.

Although these chemical intermediates were hypothesised in the 1950s, it is only now that they have been detected. Scientists now believe that, with further research, these species could play a major role in off-setting climate change.

The detection of the Criegee biradical and measurement of how fast it reacts was made possible by a unique apparatus, designed by Sandia researchers, that uses light from a third-generation synchrotron facility, at the Lawrence Berkeley National Laboratory's Advanced Light Source.

The intense, tunable light from the synchrotron allowed researchers to discern the formation and removal of different isomeric species - molecules that contain the same atoms but arranged in different combinations.

The researchers found that the Criegee biradicals react more rapidly than first thought and will accelerate the formation of sulphate and nitrate in the atmosphere. These compounds will lead to aerosol formation and ultimately to cloud formation with the potential to cool the planet.

The formation of Criegee biradicals was first postulated by Rudolf Criegee in the 1950s. However, despite their importance, it has not been possible to directly study these important species in the laboratory.

In the last 100 years, Earth's average surface temperature increased by about 0.8 degrees C with about two thirds of the increase occurring over just the last three decades.

Most countries have agreed that drastic cuts in greenhouse gas emissions are required, and that future global warming should be limited to below 2.0 degrees C (3.6 degrees F).
Dr Carl Percival, Reader in Atmospheric Chemistry at The University of Manchester and one of the authors of the paper, believes there could be significant research possibilities arising from the discovery of the Criegee biradicals.

"Our results will have a significant impact on our understanding of the oxidising capacity of the atmosphere and have wide ranging implications for pollution and climate change.

"The main source of these Criegee biradicals does not depend on sunlight and so these processes take place throughout the day and night."

Professor Dudley Shallcross, Professor in Atmospheric Chemistry at The University of Bristol, added: "A significant ingredient required for the production of these Criegee biradicals comes from chemicals released quite naturally by plants, so natural ecosystems could be playing a significant role in off-setting warming.'
Posted by arclein at 12:01 AM