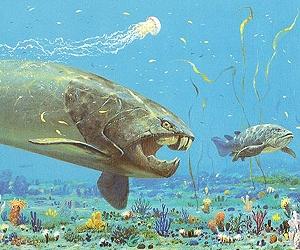 It appears that the sea to land transition took place on the flood plains choked with organic debris.  It would be slow enough to actually make sense.  An opportunity recognized and an opportunity realized.  That happens to also be a far better description of the evolutionary process in any event.

It is always nice to see an old idea modified out of recognition.  Somehow, I doubt if our old friend coelacanth had any part whatsoever to play in this story at all.  In fact, it sort of looks like the domain of a few trash fish.  After all, all fish were genetically predisposed to make the necessary changes.

This also supports similar transitions arising on land in which the potential for an expanded habitat was exploited.

new theory emerges for where some fish became 4-limbed creatures

A small fish crawling on stumpy limbs from a shrinking desert pond is an icon of can-do spirit, emblematic of a leading theory for the evolutionary transition between fish and amphibians. This theorized image of such a drastic adaptation to changing environmental conditions, however, may, itself, be evolving into a new picture.

University of Oregon scientist Gregory J. Retallack, professor of geological sciences, says that his discoveries at numerous sites in Maryland, New York and Pennsylvania suggests that "such a plucky hypothetical ancestor of ours probably could not have survived the overwhelming odds of perishing in a trek to another shrinking pond."

This scenario comes from the late Devonian, about 390 million years ago to roughly 360 million years ago. Paleontologist Alfred Romer, who died in 1973 after serving on the faculties at the University of Chicago and Harvard University, saw this time as a period of struggle and escape - and important in fish-tetrapod transition - to ensure survival.

Reporting in the May 2011 issue of the Journal of Geology, Retallack, who also is co-director of paleontological collections at the UO's Museum of Natural and Cultural History, argues for a very different explanation.

He examined numerous buried soils in rocks yielding footprints and bones of early transitional fossils between fish and amphibians of Devonian and Carboniferous geological age. What he found raises a major challenge to Romer's theory.

"These transitional fossils were not associated with drying ponds or deserts, but consistently were found with humid woodland soils," he said.

"Remains of drying ponds and desert soils also are known and are littered with fossil fish, but none of our distant ancestors. Judging from where their fossils were found, transitional forms between fish and amphibians lived in wooded floodplains. Our distant ancestors were not so much foolhardy, as opportunistic, taking advantage of floodplains and lakes choked with roots and logs for the first time in geological history."

Limbs proved handy for negotiating woody obstacles, and flexible necks allowed for feeding in shallow water, Retallack said. By this new woodland hypothesis, the limbs and necks, which distinguish salamanders from fish, did not arise from reckless adventure in deserts, but rather were nurtured by a newly evolved habitat of humid, wooded floodplains.

The findings, he said, dampen both the desert hypothesis of Romer and a newer inter-tidal theory put forth by Grzegorz Niedbwiedzki and colleagues at the .

In 2010, they published their discovery of eight-foot-long, 395-million-year-old tetrapods in ancient lagoonal mud in southeastern , where Retallack also has been studying fossil soils with Polish colleague Marek Narkeiwicz.

"Ancient soils and sediments at sites for transitional fossils around the world are critical for understanding when and under what conditions fish first walked," Retallack said. "The fish of chrome adorning many car trunks represents a particular time and place in the long evolutionary history of life on earth."