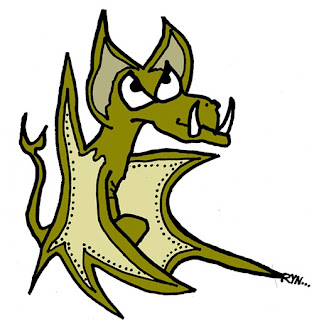 As I have posted extensively on this subject and have drawn one specific conclusion it is worthy to also discuss what are alternative sightings that fail to match our core conjecture.

My specific conclusion is that we are dealing with nocturnal gargoyles or evolved large vampire bats in particular.  The sightings are consistent even globally as we have the sculptures in .  It nicely fits the evidence of drained corpses as well which is the core criteria.   If the creature cannot drain a corpse it is hardly our suspect.

The notoriety of the few sightings and more importantly the huge number of blood drained corpses of even large animals has led to a lot more eye balls out there looking and reporting.

Other nocturnal creatures have been showing up that are plausibly coincidental to the core hunt.  We have had a number of surprises that meet other legends as well.

This article tells of the sighting of a particular version of a naked creature around the size of a large coyote.  That the head looked like a bat leaves me to suspect the witness did see a gargoyle that was not opening its wings.

Of course, the existence of bodies of furless creatures not quite a coyote may well put us back at the possibility of two different creatures instead of just one.  The bodies have a coyote’s head rather than a bat’s head so they are certainly different animals.

So far in this item we have a canine head, a buffalo head and a bat head.  It is hard not to be skeptical.

I will make one short comment that I have made before.  The strange species of coyote, and I think that is a valid proposition, is adapted to run after jack rabbits.  It could exist and be merely confused for the killer rather than the scavenger.  Its tracks would be identified as coyote and unless captured and carefully studied by experts.  We need those experts to get the blood sucking part out of their minds and to focus instead on the possibility of as yet unidentified coyote species.

In the meantime, until we see a lot more real reports on the buffalo heads, that tale at best was a set up.

Chupacabra Sighting in and the Beauty of an Open Mind

POSTED BY RYN GARGULINSKI ON FRI, JAN 6, 2012 AT 9:00 AM
Illustration Ryn Gargulinski
One rendition of a Chupacabra


Hide the children and secure the goats — a Chupacabra was spotted in . Although this creepy creature was originally born of Puerto Rican myth, it has since materialized and made its way across several continents.

The coyote-like critter has enjoyed sightings throughout the 1980s in South America, spent a bulk of the 1990s in and has been currently roaming through parts of the .

Carcasses thought to be Chupacabras have actually been DNA tested after they were brought to the and Wildlife Department. The results only proved the dead things were “some type of coyote,” although their snout and back legs exceeded the length of those found on a coyote. They also reportedly had large fangs jutting up from their bottom jaws.

The fangs surely helped give them their name, which translates from the Spanish as “goat sucker.” In addition to sucking goat blood, they are also known to attack small livestock like chicken and ducks and larger animals like cattle and horses but have never gone for a human.

KGUN9’s Chief Meterologist Erin Christiansen didn’t see fangs on the beast that was caught like, well, a chupacabra in the headlights in front of her car, but she did get a pretty good glimpse of the critter as it skittered across Speedway, west of Camino Seco, earlier this month.

“Seriously,” she wrote in an email, “I don’t know if what I saw was really a Chupacabra, but I can say that I’ve never seen anything like this animal before.

“What I saw was just a very strange looking animal. It was slightly larger than a coyote, no fur, leathery looking skin. It was mostly black with gray and brown splotches. It had a long rat-looking tail. Its face looked like a bat with disproportionately large ears, which also reminded me of a bat.”

[Could the wings have been tightly folded onto the back? arclein]

Christiansen’s sighting is not the only time an inexplicable creature reared its creepy head in Old . About 20 years back, my fiancé and a pal were sitting in their truck along South Houghton near an old corral.

“A thing came walking out of the desert,” he says. “It looked like a bear walking on two feet and had kind of like a cow’s head. We called him buffalo man. I don’t know what it was. I’ve never seen anything like that.”

[This is of course completely new and at this point makes scant sense.  Do we really need a Minotaur walking around?  It could well have been local pranksters at work because this is easy to fake up. arclein ]

While the buffalo man does not share some of the traits as the beast seen by Christiansen, variations on the Chupacabra do exist. It’s been described as having the body of a bat, the body of a kangaroo or sprouting thick wings.

It takes a lot of guts to admit seeing a Chupacabra, or even a strange beast that may have been a Chupacabra. Kudos to Christiansen and Mr. fiancé for being so bold — and illustrating the beauty of an open mind.

When people close off their minds, horrible things can happen. They get stuck in a rut of the mundane, dismissing or attacking all that cannot be explained. They eradicate the mystery and fun from life and replace it with the banal — then wonder why they’re so cranky.

Lighten up, keep an open mind and enjoy life’s possibilities. And don’t forget to hide the children and secure the goats.
__
Ryn Gargulinski, aka Rynski, is a writer, artist, performer and poet. Her column runs in the “ Weekly” print edition monthly and weekly on Friday on “The Range.” See more writing and art from RYNdustries at ryngargulinski.com and rynski.etsy.com.
Posted by arclein at 12:01 AM