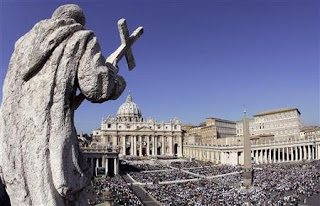 It is never a bad thing when an organization’s finances are flushed out for public scrutiny.   Certainly even seriously legitimate expenditures can be made to look bad but those are also readily defended.

Way more important, such promise of scrutiny assures prospective perpetrators of something other than divine justice.  It is always needed if one wants to rein in human nature in the first instance.  Of course someone diddled the contracts because he thought he would never be called to account.  Someone always will.

In fact the only financials I will normally accept are those of organizations that pay taxes.  There is then a bigger thug in the room with no sense of humor.  If taxes are not been paid, then little incentive exists to be careful beyond outright poverty.

With public exposure, the problem just got kicked upstairs to the Pope, and he has never shown much sign of been someone who would accept the treasury of GOD been pilfered.

By Philip Pullella | Reuters – 7 hours ago

VATICAN CITY (Reuters) - The Vatican was shaken by a corruption scandal Thursday after an Italian television investigation said a former top official had been transferred against his will after complaining about irregularities in awarding contracts.

The show "The Untouchables" on the respected private television network La 7 Wednesday night showed what it said were several letters that Archbishop Carlo Maria Vigano, who was then deputy-governor of Vatican City, sent to superiors, including Pope Benedict, in 2011 about the corruption.

The issued a statement Thursday criticizing the "methods" used in the journalistic investigation. But it confirmed that the letters were authentic by expressing "sadness over the publication of reserved documents."

As deputy governor of the for two years from 2009 to 2011, Vigano was the number two official in a department responsible for maintaining the tiny city-state's gardens, buildings, streets, museums and other infrastructure.

Vigano, currently the Vatican's ambassador in Washington, said in the letters that when he took the job in 2009 he discovered a web of corruption, nepotism and cronyism linked to the awarding of contracts to outside companies at inflated prices.

In one letter, Vigano tells the pope of a smear campaign against him (Vigano) by other Vatican officials who wanted him transferred because they were upset that he had taken drastic steps to save the money by cleaning up its procedures.

"Holy Father, my transfer right now would provoke much disorientation and discouragement in those who have believed it was possible to clean up so many situations of corruption and abuse of power that have been rooted in the management of so many departments," Vigano wrote to the pope on March 27, 2011.

In another letter to the pope on April 4, 2011, Vigano says he discovered the management of some Vatican City investments was entrusted to two funds managed by a committee of Italian bankers "who looked after their own interests more than ours."

Vigano says in the same letter that in one single financial transaction in December, 2009, "they made us lose two and a half million dollars."

The program interviewed a man it identified as a member of the bankers' committee who said Vigano had developed a reputation as a "ballbreaker" among companies that had contracts with the , because of his insistence on transparency and competition.
The man's face was blurred on the transmission and his voice was distorted in order to conceal his identity.

In one of the letters to the pope, Vigano said Vatican-employed maintenance workers were demoralized because "work was always given to the same companies at costs at least double compared to those charged outside the ."

For example, when Vigano discovered that the cost of the 's larger than life nativity scene in was 550,000 euros in 2009, he chopped 200,000 euros off the cost for the next Christmas, the program said.

Even though, Vigano's cost-cutting and transparency campaign helped turned 's budget from deficit to surplus during his tenure, in 2011 unsigned articles criticizing him as inefficient appeared in the Italian newspaper Il Giornale.

On March 22, 2011, Secretary of State Cardinal Tarcisio Bertone informed Vigano that he was being removed from his position, even though it was to have lasted until 2014.

Five days later he wrote to Bertone complaining that he was left "dumbfounded" by the ouster and because Bertone's motives for his removal were identical to those published in an anonymous article published against him in Il Giornale that month.

In early April, Vigano went over Bertone's head again and wrote directly to the pope, telling him that he had worked hard to "eliminate corruption, private interests and dysfunction that are widespread in various departments."

He also tells the pope in the same letter that "no-one should be surprised about the press campaign against me" because he tried to root out corruption and had made enemies.

Despite his appeals to the pope that a transfer, even if it meant a promotion, "would be a defeat difficult for me to accept," Vigano was named ambassador to in October of last year after the sudden death of the previous envoy to the .

In its statement, the said the journalistic investigation had treated complicated subjects in a "partial and banal way" and could take steps to defend the "honor of morally upright people" who loyally serve the Church.

The statement said that today's administration was a continuation of the "correct and transparent management that inspired Monsignor Vigano."