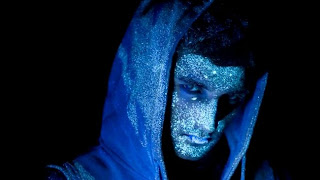 Slowly but surely general security is steadily improving.  More cameras and more electronic capability as loopholes are systematically shut out.  Here we have the addition of sprays that nicely identify a perpetrator with markers good for months.

No one expects to make security bullet proof but we are no longer that far away.  The advent of personal cameras everywhere has made public criminal behavior effectively impossible to hide and run away from.  Smash and grab is no longer easy, nor is a simple hold up as this shows.

Recall that bank robberies are no longer common at all and not even very successful.

It has been a long slow process to secure our world but incrementally it has been getting better.

I'm not lovin' it - the SelectaDNA spray remains on clothes for up to six month and glows under UV light. Picture: Courtesy of SelectaDNA

McDONALD'S restaurants are fighting back against thieves by blasting suspected robbers with an invisible DNA spray as they attempt to flee.

The spray, which remains on the suspect's skin for two weeks and on clothes for up to six months, has been introduced in some of the chain's busiest NSW stores, including those at Parramatta, Granville, Auburn, Lidcome, Kingsford and Wollongong, reported The Daily Telegraph.

If the SelectaDNA "forensic marking" spray proves successful in apprehending bandits, McDonald's will introduce the system across all its 780 Australian outlets.

Developed in the by a police officer and a chemist, the spray has been used by McDonald's outlets in and .

Each outlet keeps the details of its distribution a close secret, but one McDonald's restaurant in The installed above the main door an orange device which was electronically linked to a panic alarm system. Staff could activate the device in an emergency.

You have been warned, the SelectaDNA warning sign telling intruders the glowing DNA spray is in use. Picture: Courtesy of SelectaDNA

"Once there has been a security breach, the hi-tech spray unit will douse fleeing robbers with an invisible, synthetic DNA solution," McDonald's 's chief restaurant support officer, Jackie McArthur, said.

"The solution is invisible to the naked eye and unique to each location. It stays on clothing for up to six months and on skin for up to two weeks."

Using a UVA light, police can see the markings left by the system and link the offender back to the scene.

"SelectaDNA is non-toxic, non-allergenic and perfectly safe to deploy. It meets all Australian standards," he said.

Theft is a serious problem for fast-food outlets such as McDonald's, which has high cash turnover, multiple entry and exit points and more than 85,000 staff who often work through the night at truck-stops and other remote places.

In a single week in September, two hold-ups occurred at a McDonald's outlet at Merrylands in 's west.

"Crime can occur anywhere at any time, which is why our extensive safety and security protocols are in place at every restaurant throughout the entire day," Ms McArthur said.
"These locations are some of our busiest, so it makes sense to try out the new technology here.

This is the first time the system will be used in , and although its marketers claim an "85 per cent crime reduction" rate, the proof of its worth is not yet clear.

SelectaDNA trades on a "DNA fear factor," claiming the system is more about prevention than arrests.

Scores of law-enforcement agencies in the , including Police, have handed out the spray kits so residents can mark their property, and it has been widely used by schools and businesses.