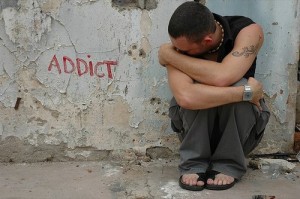 I know work has gone on in this area for some time, but it appears that it is now getting more attention.  This appears largely as a result of the actual proliferation of mind altering chemicals and the promise there of no end in sight.

A subtext of the addiction culture has been that most individuals who try drugs out do not get addicted at all.  Better, plenty of individuals who adopt an addictive lifestyle through social pressure will simply shake the addiction.  This has given us to fully understand that there is an underlying predisposition to actual hard addiction that we are dealing with in a narrower group of individuals than the entire population.

It thus behooves us to discover every actual addiction pathway and to discover if it is possible to either block them or to ameliorate them.   That then reduces the problem to a social problem form a clear cut medical problem.

Alcohol is an excellent model.  It actually takes vast amounts of alcohol abuse in order to become biologically addicted.  The core problem has been managing the social structures that allow and encourage excessive alcohol abuse.  In our own society I have watched a steady change in social practices in alcohol usage that sharply cut consumption and cut all sorts of dangerous practices out of the social environment.

For some reason or other, folks learned to enjoy themselves without the third and forth drink.  Thus a system whereby the addictive problem is managed successfully can also successfully manage the use of the drugs themselves.

I may be imagining it, but it appears that severe alcoholism is actually in sharp decline generally.

(Medical Xpress) -- Better help with battling drug addiction could be at hand as a result of research underway at of .

Dr Bronwyn Kivell, a Senior Lecturer in the School of Biological Sciences, is screening a number of anti-addiction compounds that may ultimately form the basis of medications that help reduce cravings and prevent relapses for people addicted to psychostimulants such as cocaine or methamphetamine.

Collaborating with a medicinal chemist at the University of Kansas in the United States along with her Victoria University colleague Professor Susan Schenk, Dr Kivell is investigating ways of targeting a protein in the brain, called the kappa opioid receptor, which can alter a person’s perception of mood, reward and pain.

The researchers are focused on a Mexican herb called salvia divinorum, also known as Mexican or tripping weed, a powerful hallucinogen that has been chewed by Mexican Indians for centuries.

Most hallucinogenic substances affect serotonin, a neurotransmitter in the body that influences people’s sense of well-being, but Dr Kivell says salvia is different.

"It has a unique structure and contains compounds that we think could have anti-addictive properties."

The compounds are being developed at the of and tested at .

A usual problem with compounds that target kappa opioid receptors, says Dr Kivell, is their tendency to have extreme side effects such as nausea and depression.

"However, some of those we are testing have much milder side effects."

Another strand of Dr Kivell’s research targets more effective therapies to help people stop smoking. She says while nicotine is the major addictive component in cigarettes, there are many other things in cigarette smoke that contribute to addiction.

Her research, being carried out with Crown Research Institute ESR ( and Research), is studying the role of a number of minor tobacco alkaloids.

"Most tools to help people quit smoking are based on nicotine replacement and have relatively low success rates. Our goal is to work out if it is feasible to develop other anti-smoking aids that target proteins in the brain that are involved in addiction."

Dr Kivell, who completed her PhD at Victoria, has also carried out drug addiction research at the National Institute on Drug Abuse in in the .

She returned to to work on a ground-breaking project that is looking at both the cell biology and the behavioural patterns resulting from long-term use of MDMA or ecstasy.

The work is a collaboration between ’s of Biological Sciences and and aims to better understand the changes ecstasy causes in the brain’s neurochemistry and its impact on behaviour.

"Drug addiction research is exciting science and it’s also very relevant. Banning every mind-altering drug is not going to work so we need to find therapies to help people with their addiction.

"It’s a very complex field and there is a lot yet to understand about why some people who take drugs get addicted and others don’t."

Dr Kivell has had funding from the Neurological Foundation, the Medical Research Foundation and the Health Research Council (HRC).
Provided by

Alcohol and drug addiction are diseases that progress through predictable stages. It takes a trained health professional, often a doctor specializing in addiction medicine, to make an accurate diagnosis and prescribe the most appropriate treatment, whether it be outpatient counseling or an inpatient alcohol and drug rehab.
Know More : www.drug-rehabs.com