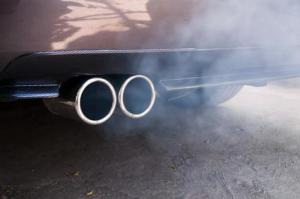 What they have discovered is superior method for removing CO2 from a humid air stream and then releasing that CO2 into a usable form for further application.

What comes to mind immediately are smoke stacks.  As I have posted in the past the technology already exists that allows SOx and NOx to be stripped out of the gas flow.  It is then run through a water quench that strips out the acids, particulates and salts produced in a form that also allows easy recycling.  The remaining gas just happens to be CO2.  This technology now allows for the hypothetical operation of a closed system that consumes fuels and produces no stack gas at all.

The cost will be an unattractive addition, so it will not be sped into operation anytime soon.  Yet it is good to know that it is now clearly possible to consume combustion products totally.  It will cost a fortune in engineering work to pull it all together and to make it work.

New Materials Remove Carbon Dioxide from Smokestacks, Tailpipes and Even the Air

ScienceDaily (Jan. 4, 2012) — Scientists are reporting discovery of an improved way to remove carbon dioxide -- the major greenhouse gas that contributes to global warming -- from smokestacks and other sources, including the atmosphere. Their report on the process, which achieves some of the highest carbon dioxide removal capacity ever reported for real-world conditions where the air contains moisture, appears in the Journal of the American Chemical Society.

Alain Goeppert, G. K. Surya Prakash, chemistry Nobel Laureate George A. Olah and colleagues explain that controlling emissions of carbon dioxide (CO2) is one of the biggest challenges facing humanity in the 21st century. They point out that existing methods for removing carbon dioxide from smokestacks and other sources, including the atmosphere, are energy intensive, don't work well and have other drawbacks. In an effort to overcome such obstacles, the group turned to solid materials based on polyethylenimine, a readily available and inexpensive polymeric material.

Their tests showed that these inexpensive materials achieved some of the highest carbon dioxide removal rates ever reported for humid air, under conditions that stymie other related materials. After capturing carbon dioxide, the materials give it up easily so that the CO2 can be used in making other substances, or permanently isolated from the environment. The capture material then can be recycled and reused many times over without losing efficiency. The researchers suggest the materials may be useful on submarines, in smokestacks or out in the open atmosphere, where they could clean up carbon dioxide pollution that comes from small point sources like cars or home heaters, representing about half of the total CO2 emissions related to human activity.

Other bookmarking and sharing tools:

Story Source:
The above story is reprinted from materials provided byAmerican Chemical Society.
Note: Materials may be edited for content and length. For further information, please contact the source cited above.

CO2 is not a pollutant. It is a beneficial trace gas that plant's consume. The higher the CO2 level, the batter off we are.

The ultimate irony of the AGW hoax, is that WARMING IS GOOD!. Extreme cooling is the only type of climate change that we should fear, because crops don't grow well when it's cold, which causes all life forms to suffer.