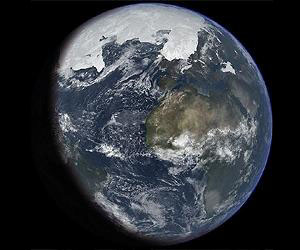 I consider this position to be completely wrong as those who have reviewed my arguments regarding the Pleistocene Nonconformity will understand.  It takes a lot more energy redistribution to end the Great Ice Age than was ever plausible for the minor drift in orbital position.  In fact, the original objections to an Ice Age even existing was that the low latitude ice was impossible.  That objection was never cured but simply ignored.

To accept present ideas implies that the tropics become covered in snow during part of the year which is self evidently not true ever.  The present ice cap region remains inside the arc of the seventy fifth latitude or fifteen degrees of the pole and all present evidence suggests that it is just about impossible for the ice cap to expand further south that this even on land.

The fact that a thirty degree polar shift happens to solve this mystery for both poles goes ignored because no one wants to understand that the crust itself was shifted 12900 years ago.  Yet as we have discussed all the problems nicely go away when that happens.

With the Ice Age solved for a few million years at least we can now discuss the CO2 problem.  First the gain of CO2 itself is not a linear effect and as more is pushed into the atmosphere, the more it is taken up and recycled until we do reach a plateau, provided we are actually the forcing agent and not just the recent warming cycle itself.  It does not remain self evident that CO2 is a warming agent at all.  The last fifteen years in fact has demonstrated exactly the opposite.

There are also excellent arguments in support of increased CO2 for our planet which we will ignore for now.  More important than any of this is that the global economy will be exiting the carbon based energy system over the next two decades in its entirety except for steel making.  Once that has happened, CO2 should enter a steady decline that will run for centuries and slowly take the atmospheric CO2 back to historic levels.  Unless of course we have been totally wrong.

The day is coming in most of our lifetimes when a gasoline engine will be looked upon as fondly as a one banger or a steam ticket.

Next Ice Age Delayed For Thousands Of Years Warn Scientists

That may sound like good news, but it probably isn't, said Jim Channell, distinguished professor of geology at UF and co-author. "Ice sheets like those in western are already destabilized by global warming," said Channell. "When they eventually slough off and become a part of the ocean's volume, it will have a dramatic effect on sea level." Ice sheets will continue to melt until the next phase of cooling begins in earnest.

Unprecedented levels of greenhouse gases in the Earth's atmosphere are disrupting normal patterns of glaciation, according to a study co-authored by a researcher and published online Jan. 8 in Nature Geoscience.

The Earth's current warm period that began about 11,000 years ago should give way to another ice age within about 1,500 years, according to accepted astronomical models.

However, current levels of carbon dioxide are trapping too much heat in the atmosphere to allow the Earth to cool as it has in its prehistoric past in response to changes in Earth's orbital pattern. The research team, a collaboration among , and UF, said their data indicate that the next ice age will likely be delayed by tens of thousands of years.

That may sound like good news, but it probably isn't, said Jim Channell, distinguished professor of geology at UF and co-author.

"Ice sheets like those in western are already destabilized by global warming," said Channell. "When they eventually slough off and become a part of the ocean's volume, it will have a dramatic effect on sea level." Ice sheets will continue to melt until the next phase of cooling begins in earnest.

The study looks at the prehistoric climate-change drivers of the past to project the onset of the next ice age. Using astronomical models that show Earth's orbital pattern with all of its fluctuations and wobbles over the last several million years, astronomers can calculate the amount of solar heat that has reached the Earth's atmosphere during past glacial and interglacial periods.

However, there is a much higher concentration of greenhouse gases trapping the sun's heat in the Earth's atmosphere now than there was in at least the last several million years, he said. So the cooling that would naturally occur due to changes in the Earth's orbital characteristics are unable to turn the temperature tide.

Over the past million years, the Earth's carbon dioxide levels, as recorded in ice core samples, have never reached more than 280 parts per million in the atmosphere. "We are now at 390 parts per million," Channell said. The sudden spike has occurred in the last 150 years.

For millions of years, carbon dioxide levels have ebbed and flowed between ice ages. Orbital patterns initiate periods of warming that cause ocean circulation to change.

The changes cause carbon dioxide-rich water in the deep ocean to well up toward the surface where the carbon dioxide is released as a gas back into the atmosphere.

The increase in atmospheric carbon dioxide then drives further warming and eventually the orbital pattern shifts again and decreases the amount of solar heat that reaches the Earth.

"The problem is that now we have added to the total amount of CO2 cycling through the system by burning fossil fuels," said Channell. "The cooling forces can't keep up."

Channell said that the study, funded by the National Science Foundation in the U.S, and the Research Council of Norway and the Natural Environment Research Council in the United Kingdom, brings to the forefront the importance of atmospheric carbon dioxide because it shows the dramatic effect that it is having on a natural cycle that has controlled our Earth's climate for millions of years.

"We haven't seen this high concentration of greenhouse gases in the atmosphere for several million years," Channell said. "All bets are off."
Posted by arclein at 12:02 AM

What a bunch if junk science!
"Millions of years ago"?
People can't even represent accurate accounts since the foundation of our nation yet we are to believe accounts from some completely made up garbage.

This is voodoo science.