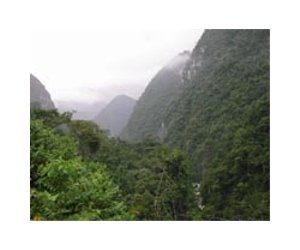 It seems strange that we are learning things like this only now.  This mocks the miles of scientific opinion produced on forests and soils over the past century.  What is suggested here is that an ecosystem left on it own will reach a stable condition is which ample nitrogen will be retained in the living biomass to the extent that it is topped up excessively by lightening and related rainfall which then generates surplus nitrogen being exported.

We need to more clearly understand the biological pathways and be prepared to apply them to agriculture.

As my readers understand, we have extensively discussed the production of a living soil through the application of biochar in particular.  Biochar captures nitrogen and other soluble nutrients otherwise released into the ground water.  This makes it easy to develop a sustaining living soil base for agriculture as was proven in the Amazon with the terra preta soils.

What this strongly suggests is that it may be possible and certainly desirable to operate working soils in such a way that they may even become nitrogen positive over their annual cycle.  This may be optimistic but I think we should strive for such an outcome.

Our ultimate objective is produce working soils anywhere and having them become nutrient neutral.  This ultimately requires a soil capacity to store nutrients in place for use even years later.  Biochar provides just that.

Many tropical forests are extremely rich in nitrogen even when there are no farms or industries nearby, says researcher Jack Brookshire.

It's because of biological interactions that occur naturally in the forests, Brookshire and four colleagues said in a paper they published Jan. 15 in the online version of the journal Nature Geoscience.

Disputing some long-held beliefs about high nitrogen levels in tropical forests, Brookshire said pollution isn't always the reason behind it. It can also be caused by natural interactions between the forest and nutrient cycles.

Brookshire and his team suggested that in mountainous tropical forests, nitrogen availability may not limit plant growth or its response to higher carbon dioxide levels in the atmosphere.

Brookshire began his study in 2006 when he was a postdoctoral researcher at . He continued it after moving to MSU in 2009. He is now an assistant professor in the Department of Land Resources and Environmental Sciences.

To conduct their study, Brookshire, two scientists from Princeton University and two researchers from the Stroud Water Research Center in Avondale, Pa., used data collected between 1990 and 2008 to examine the concentration of dissolved nitrogen compounds and the isotopic composition of nitrate in streams in six mountain forests in Costa Rica and 55 mountain forests across Central American and the Caribbean.

All of the forests were old-growth tropical forests with no signs of large-scale disturbance. They were classified as mountain evergreen, mountain rainforest or cloud forest.

Evergreen forests in are at lower altitudes. Rainforests are at higher elevations. Cloud forests are at the highest elevation. They are bathed in clouds or moisture for much of the year.

The researchers also examined new samples that Brookshire collected in and . Sampling was an exciting process that involved hiking through thick forests and swimming through narrow rock gorges, Brookshire said. He was able to avoid snake bites, but not the stinging insects or oppressive humidity.

"You don't dry out," Brookshire said.

The research team found high levels of nitrate in the streams of the tropical forests, indicating large losses of bioavailable nitrogen, Brookshire said. They also found evidence that the loss wasn't recent or a one-time thing. They discovered that the nitrate resulted from plant-soil interactions and not directly from atmospheric deposition.

Tropical forests are significant reservoirs for carbon, and their future relies on forest interactions with nutrient cycles, he said.

Scientists in the past have compared the effect of industry and agriculture on the temperate forests of the northern hemisphere, but relatively little research has been conducted on forests near the equator, Brookshire said.

He decided to look at forests in and because he already had colleagues there and they, like him, were intrigued by the fact that some tropical forests have dramatic nitrogen exports without apparent human causes.

"These systems have a natural capacity to build up levels of nitrates in soil that we only see in the most polluted temperate forests," Brookshire said.

The research published in Nature Geoscience will continue, Brookshire said.

"This is an on-going research project to figure out how forests work in the larger earth climate system and how they might respond to global change," Brookshire said. "The deep mysteries about how these ecosystems work, we are just beginning to understand. Things are much more complex than previously thought."