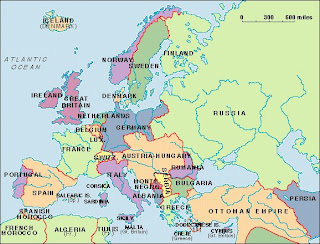 This is an important book for those who wish to understand how the First World War came about.  The ‘school’ explanations were always too pat and something was clearly missing.  What this book makes abundantly clear is that Germany did not have a land based offensive strategic concept at all and the whole tale of a master plan known as the ‘schlieffen plan’ is at best a deliberate calumny promulgated by the allies to justify to the world at large the reality that they did have an offensive strategic concept that they had promoted behind the façade of alliances and supported by a series of moves to support such a war of outright aggression.

I personally can never forgive the fools who led the into the maelstrom of WWI.  It was an egregious error and it allowed the French militarists to successfully begin the war with the outright support of who hoped to expand into the Balkans. It crippled the itself and we got the horrors of the twentieth century as a direct result and it is hard to imagine a worse outcome.

War is always a story of miscalculations.

3                    All ’s prewar planning envisaged how best to practice a strategic defense and that was practically their only strategic choice. Thoughts on outright defeating the French Army were easily shown to need a third more troops and a one front war.  This actually happened in the Second war with armor doctrine providing the necessary force multiplier.

4                    The French came to believe they could win such a war and they went immediately over to the offensive.  German unanticipated tactical superiority halted the offensive in its tracks and roundly trashed the French with a two for one exchange of losses.

6                    What followed was Moltke’s blunder, although it is not called that.  Having put the French into full retreat, he followed them into Northern France with no strategic concept and failed to release six corps for transport back to were they would have been in position to actually destroy the Russian armies then and there.

7                    This led to inevitable strategic stalemate.  At the same time, it proved impossible for anyone to undo this error by simply withdrawing back toward the mass of the French army in were the war may well have been brought to a successful conclusion or a quick armistice.

In fact the fiction of the Schlieffen plan served to provide Moltke cover for his failure to stay with the original plan which then led to the inevitable long war that ground up all the belligerents and precipitated WWII.

The calculation to go to war in 1914 was driven by two things.  The Allies believed that they would never have a better preponderance of power.  They were right because changes taking place in and elsewhere would have necessitated the enlargement of the German Army which in a decade would have made a war plausibly unwinnable.  For the same reason had zero reason to want such a war.  It was a preemptive war.  The second driver is the folly of ’s own international ambitions reflected in the build up of its navy and the promotion of a naval arms race with which was unwinnable.  This led directly to ’s decision to seek alliance with and that allowed French offensive war planning to become plausible.

This is a vastly more valid explanation of the events and positions that led to the Great War and I heartily recommend this book.

In 2002 Zuber, a retired U.S. Army officer with a doctorate in history, gave us Inventing the Schlieffen Plan, which has proven one of the most important and controversial recent works on World War I, arguing persuasively that Germany had no “Schlieffen Plan” in the popularly understood sense of a single master plan for a quick victory in a war with France and Russia.

The Real German War Plan, Zuber examines Imperial ’s strategic dilemma in the period leading p to World War, giving the reader an analysis and comparison of the various prewar mobilization plans in conjunction with contemporary strategic military intelligence assessments. This was a difficult period due to the to the French Army’s unexpected introduction of massive numbers of quick-firing guns, the famous “75”, which gave them a temporary, but critical superiority in artillery which made a German invasion obviously impossible, because it required several years for Germany to develop its own quick-firing guns and produce them in large quantities.

This led Schlieffen, chief of the Great General Staff, to develop various more or less notional plans, looking to the future, for his proposed right flank wheel through Belgium to Paris, culminating in his final grand memorial that included twenty-four non-existent divisions, an increase of 35 percent over historical strength, and arguably was an appeal for an enlarged army, likely essential if anything like the Schlieffen “Plan” was feasible.

Zuber is persuasive that that German mobilization plans were much more flexible and opportunistic than previously believed. He argues that the 1914 plan as initially implemented by Moltke the Younger was well within the parameters of past plans, but failed due to Moltke’s unfocused implementation of his own plan and plain lack of sufficient forces, not to mention excessive assumptions about what the enemy might do.

This book’s shining value, though, is Zuber’s thorough, scholarly, and readable explanation of the strategic context underlying all German war planning over the twenty years prior to World War One.  Many interesting details are also presented, such as the importance of the prodigious French use of 75mm artillery ammunition during in the 1914 of the , which actually caused shortages during later operations.

Zuber’s careful “net assessment” also illuminates ’s relative strategic position vis a vis  and over a long period.   He points out that Russian industrial development accelerated sharply after the defeat by in 1905 and the subsequent revolutionary disorders in the country, with ominous strategic consequences for , though he also contends that ’s strategic position was weak in 1913-14 compared to then-expected immediate future developments.  The latter contention is based to a significant degree on Germany’s belated effort to implement Schlieffen’s final request by significantly expanding the number of reserve divisions and corps shortly just before the onset of World War One.  The three major continental powers (, , and ) all had significant under-utilized trained reservists who could have been formed into organized units, but weren’t due to budget-related equipment issues and, perhaps, negative attitudes toward reservists by professionals.  Schlieffen’s requested extra twenty-four reserve divisions could easily have been paid for by the money invested in ’s unsuccessful and enormously expensive naval race with , and budget authority for this expansion had just started when war broke out.

Zuber’s several volumes on the question of German military planning in the period leading up to the Great War has sparked a great deal of scholarly debate.  The on-line journal, War in History has been the principal forum for the discussion of the Zuber’s thesis that there was no one “ Schlieffen Plan” as such.  Most recently, the July2011 has a not very convincing rebuttal to his premise.  This academic acrimony, should detract from the greater, strategic context, which makes this book an excellent study of recent developments in study of the onset of World War One and continental
mobilization plans.

The book’s greatest value, however, lies in Zuber’s presentation of the relationship between the German General Staff’s analysis of ’s strategic position and its development of appropriate military strategies, a methodology that merits emulation.
Posted by arclein at 12:01 AM

Germany's disastrous building of a navy was their biggest blunder. It made France England's natural ally rather than main competitor. They had no reasonable way to use their fleet, and only once (in both wars) showed any sign of knowing what a fleet was for- when they invaded Norway. They didn't even use it to interfere with the landing of the BEF.

I must totally agree with you on that. Yet plunging into northern france was as egregious and turned a successful defense into an over extended offense that could never be extended as was proven in 1918 when they exhausted themselves trying.

A fully defeated Russia in the fall of 1914, would surely have shaken French resolve in the face of their own battlefield defeats at the time and an armistis would surely have been sought. The Brits at that time had just woken up to the need for total mobilization and would have leapt at an alternative.