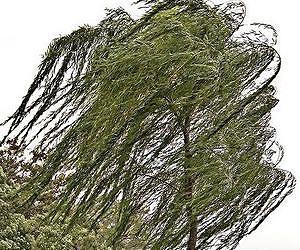 How very odd and unexpected. The extra stress produces a higher quality bio fuel. Thus we can breed for all this to produce a superior product.

The same likely applies to most other trees as well that are not of interest for this application but it is good to know that it is an effect.

I am not an optimist for this type of fuel although a confluence of willing partners can surely make it work. Not unlike a contractor and a cement company deciding to operate a waste methane operation. They work out fine except afterward everyone is wondering why anyone bothered.

Willow trees cultivated for green energy can yield up to five times more biofuel if they grow diagonally, compared with those that are allowed to grow naturally up towards the sky. This effect had been observed in the wild and in plantations around the UK, but scientists were previously unable to explain why some willows produced more biofuel than others.

Now British researchers have identified a genetic trait that causes this effect and is activated in some trees when they sense they are at an angle, such as where they are blown sideways in windy conditions.

The effect creates an excess of strengthening sugar molecules in the willows' stems, which attempt to straighten the plant upwards. These high-energy sugars are fermented into biofuels when the trees are harvested in a process that currently needs to be more efficient before it can rival the production of fossil fuels.

Willow is cultivated widely across the UK, destined to become biofuels for motor vehicles, heating systems and industry. The researchers say that in the future all willow crops could be bred for this genetic trait, making them a more productive and greener energy source.

The study was led by Dr Nicholas Brereton and Dr Michael Ray, both from the Department of Life Sciences at Imperial College London, who worked with researchers at Rothamsted Research, and the University of the Highlands and Islands' Agronomy Institute (at Orkney College UHI). The study is published in the journal Biotechnology for Biofuels.

Dr Brereton said: "We've known for some time that environmental stresses can cause trees to naturally develop a slightly modified 'reaction wood' and that it can be easier to release sugars from this wood. This is an important breakthrough, our study now shows that natural genetic variations are responsible for these differences and this could well be the key to unlocking the future for sustainable bioenergy from willow."

The researchers conducted a trial in controlled laboratory conditions on a rooftop in central London at the Gro-dome facility at Imperial's South Kensington Campus. They cultivated some willows at an angle of 45 degrees, and looked for any genetic differences between these plants and those allowed to grow naturally straight upwards.

The team then looked for the same effect with willows growing in natural conditions on Orkney Island, off the northern-most coast of Scotland, where winds are regularly so strong that the trees are constantly bent over at severe angles. Their measurements confirmed that the willows here could release five times more sugar than identical trees grown in more sheltered conditions at Rothamsted Research in the south of the UK.

Dr Angela Karp at Rothamsted Research who leads the BBSRC-funded BSBEC-BioMASS project said "We are very excited about these results because they show that some willows respond more to environmental stresses, such as strong winds, by changing the composition of their wood in ways that are useful to us. As breeders this is good news because it means we could improve willow by selecting these types from the huge diversity in our collections".

This work forms part of the BBSRC Sustainable Bioenergy Centre (BSBEC) where it is linked with other programmes aimed at improving the conversion of biomass to fuels. Coupled with work at Rothamsted Research, where the National Willow Collection is held, the new results will help scientists to grow biofuel crops in climatically challenging conditions where the options for growing food crops are limited, therefore minimising conflicts of food versus fuel.