Giant Sloths of the Applachians 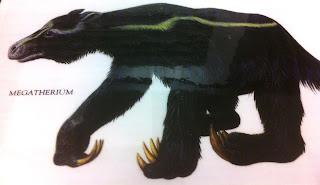 This is all part of the of course and we actually have a number of plausible cryptids reported over the years.  Bigfoot is of course the most common  but we also have the Giant Sloth and a small hominid that is likely part of the Lucy lineage.  These are the best suspects.  It I have taken a lesson from uncovering the Giant Sloth is that it is way too easy to misidentify such a creature in a glimpse.  However if it is in the fossil record, do not discount its presence in the modern era even if confined to a small range.

Here we have an excellent report of what I am suspect is the Giant Sloth.  The second report is likely something we know and you have my guess of a tom cat.  This is also not the first time that horns have been associated with the Giant Sloth.  Otherwise the highly robust claws were observed and the visible fangs.  Generally i am seeing the huge claws reported as confirmation and without them we do not have a Giant Sloth.

Confronting farmers tells me that it may have established its range locally and was taking advantage of the bounty.  Then it possibly backed off or may simply know enough to avoid guns.  After this story got around it is a surety that everyone began to pack.  It is even possible that it was simply passing through to a remote range and we got the reports of its foraging.

It is most likely that this confirms that males do grow goat like horns although their size is not described.  It also shows us that the creature can be opportunistic and must never be trusted.  It may also be more of a daytime hunter than expected.

For the moment, i am likely the only person out there looking for the Giant Sloth as a small subset of all reports.  We alraedy have enough good quality reports to confirm that the creature is out there.

An ungodly looking creature created havoc among the local god-fearing Amish community. Witnesses described the creature as following: The size of a good heifer, gray in color with a white mane. It had tiger like fangs and curved horns like a Billy goat. It ran upright on long legs, and had long grizzly claws. In one incident, the creature sent a team of horses and two brothers flying when it approached their hay wagon. The following day, a man was cutting weeds on his farm about five miles from the previous incident when he heard a fierce roar and turned to see a monster with three horns and a tail charging in his direction. He raised his scythe to defend himself, only to have the implement ripped from his hands. At that point, the man wisely decided to turn both cheeks to the monster and escaped as fast as he could run. A day later a woman was feeding poultry on a farm midway between the two earlier incidents when she heard a commotion and turned to see the creature in the act of snatching a goose in each of its hands. She bravely ran toward the thing, waving her apron. The woman managed to recover one of her geese when the creature threw it at her, knocking her to the ground in the process. The interloper then escaped with the remaining bird in hand.

I found an interesting account posted on Stephen Wagner's Paranormal About by Stacy L. The incident took place recently in ...a location I am very familiar with. I have received several odd cryptid sightings from in and around York and Lancaster counties (which are in south-central ...where I grew up and just north of my residence in ). Was this a natural sighting...or a lost pet?

I was just relaxing in my house and watching some TV. We have double sliding doors with windows facing our backyard, and I can see outside from where I was lounging on the couch.


That's when something began moving in the corner of my vision. When I glanced over, I noticed our 10-foot-high dogwood tree on the very end bordering our yard from the neighbors was shaking violently. I couldn't figure out what kind of animal, aside from a human, could shake an entire tree like that. I stood up and walked over to the window to peer out.


There are also several extremely large pine trees bordering along the end of the backyard and I couldn't see anything through the thick foliage, even though the sun was shining brightly in the sky. The dogwood continued to shake, and then to my astonishment an enormous gray creature jumped from one of the dogwood's flimsy branches and into a huge pine nearby.


I only glimpsed it for about three seconds at most, but I definitely got a good look at it, and it was like nothing I have ever seen before. The creature was rather large, perhaps around 4 feet in length and about the size of a fox. It was all gray except for its long skinny tail that had black and white stripes along it, like those lemurs from . Its front end was somewhat slouched down, as if it had short front legs and large powerful back legs, like how a kangaroo would look.


It was the weirdest creature I had ever seen. Unfortunately, I didn't get a look at its head as it quickly vanished into the pine. A few minutes later, I was outside rooting through the leaves and long grass at the end of the yard looking for footprints and maybe to catch a sighting of the creature, but I didn't find anything. Yet I know what I saw.

[ a ten foot dog wood is not a lot of tree so movement is very likely.  The stripes on the tail suggest that we are dealing with a big old tom cat who for some reason was getting away from something.  Arclein ]


I live in , and such creatures like that don't live in this area. If I absolutely had to call it a specific animal, I would say it was a lemur, but the tail wasn't bushy, but very slender and agile like a cat's. Wish I had taken a picture.


I haven't seen it since that day, but there have been weird scratching noises below my bedroom window at night ever since I saw the creature and I wonder if the two are related or if its another incident that coincidentally just happened in the same time period. And I wonder if I should report the sighting. If I should, who do I report to?

So...I previously mentioned that I had received odd reports from York and Lancaster counties over the years.
Posted by arclein at 12:00 AM