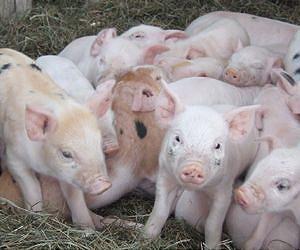 This is really neat and as noted it should carry over to human health. We all want a robust immune system and it could just be that a dose of this pro biotic at the right time will do the trick. We also have a core pathway to recognize a working protocol.

In the meantime, do eat high quality yogurt from time to time. It just may be powering up your immune system in ways that the text books never knew.

I keep been struck by just how ignorant we are of our interaction with the natural world and how so much seriously wrong ideas are out there that are accepted with little study. After all if it sounds good it must be. What is worse, what we do loosely, science has been doing in spades.

In a better world we can take a yogurt holding an age adjusted dose of pro biotic s every month or two and then forget everything else we think we know about germs and disease because they will all be suppressed. I suspect we are closer to this world than is obvious.


In a study of 36 weanling-age pigs, researchers found that a dose of lipid-producing Rhodococcus opacus bacteria increased circulating triglycerides. Triglycerides are a crucial source of energy for the immune system.

"We could potentially strengthen the immune system by providing this bacterium to animals at a stage when they are in need of additional energy," said Janet Donaldson, assistant professor in Biological Sciences Mississippi State University. "By providing an alternative energy source, the pigs are most likely going to be able to fight off infections more efficiently."

Jeff Carroll, research leader for the USDA Agricultural Research Service Livestock Issues Research Unit in Lubbock, Texas, said R. opacus could be used sort of like an energy producing probiotic. He said weanling pigs are more susceptible to pathogens and stress because they have to adjust to a new diet and a new environment. To add to the risk, weaning comes at a time when a pig's immune system is immature. The stress of weaning can lead to reduced feed intake, less available energy and an increased risk of infection.

With an oral supplement of live R. opacus, weanling pigs would have an alternative source of energy. Even if pigs ate less feed, they would still have access to the triglycerides produced by these bacteria.

The triglycerides could be used as an energy source during this critical stage of development.

Throughout the experiment, the researchers kept watch for any potential side effects. Donaldson said they saw no negative side effects in the pigs given R. opacus. Because of this success, Donaldson said pig producers might someday use R. opacus on their own farms. She said the bacteria could be provided to pigs through existing watering systems.

The next step in the experiment is to test how pigs given R. opacus react to an immune challenge such as Salmonella. Carroll said he is also curious to see if R. opacus can help calves stay healthy during transport.

"This could potentially be carried over to human health as well," Donaldson said.

The abstract from this project, titled "Novel Use of Lipid-Producing Bacteria to Increase Circulating Triglycerides in Swine," is the 2013 recipient of the National Pork Board Swine Industry Award for Innovation. The award will be presented at the 2013 American Society of Animal Science Southern Section Meeting in Orlando, Florida