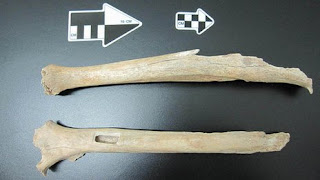 We already have established linkages that are ten thousand years old in Europe, so now been able to trace human biological continuity back a full 40,000 years is great news. Because it is all local, a lot of distractions disappear. Even better they are clearly family.

What this also continues to confirm is that when agricultural man arose ten thousand years ago, their expanding population simply absorbed the local non agricultural peoples. We see exactly this happening today with our first nation peoples. The majority are already hybrids and it is inevitable that this will continue apace as they are now successfully fitting into the greater whole just about everywhere.

Preservation of an inbred tribe depends on population success and that has become totally irrelevant in the modern world. It is now wiser to optimize genetic diversity instead to attract maximum hybrid vigor.

It is remarkable how the march of time dissolves away all local conceits in progress of our genetic inheritance.

Researchers have been able to trace a line between some of the earliest modern humans to settle in China and people living in the region today.

The evidence comes from DNA extracted from a 40,000-year-old leg bone found in a cave near Beijing.
Results show that the person it belonged to was related to the ancestors of present-day Asians and Native Americans.

The results are published in the journal PNAS.

Humans who looked broadly like present-day people started to appear in the fossil record of Eurasia between 40,000 and 50,000 years ago.

But many questions remain about the genetic relationships between these early modern humans and present-day Homo sapiens populations.

For example, some evidence hints at extensive migration into Europeafter the last Ice Age.

And fossil finds from Red Deer Cave, also in China, and Iwo Eleru in Nigeria point to a hitherto unappreciated diversity among Late Pleistocene humans.

The team managed to extract genetic material from an ancient leg bone found in 2003 at the site of Tianyuan Cave outside Beijing.

They managed to extract the type of DNA found in the nuclei of cells (nuclear DNA) and genetic material from the cell's "powerhouses" - known as mitochondria.

They used new techniques that can identify ancient genetic information from an archaeological find, even when large amounts of DNA from soil bacteria are also present.

The fossils were discovered in 2003 at Tianyuan near Beijing

"More analyses of additional early modern humans across Eurasia will further refine our understanding of when and how modern humans spread across Europe and Asia", said co-author Svante Pääbo, from the Max Planck Institute for Evolutionary Anthropology in Leipzig, Germany.
Research in the last few years has shown that early modern humans interbred with ancient human species such as the Neanderthals and Denisovans as they migrated from Africa and settled across the world.

Around 40,000 years ago, the Neanderthals and Denisovans were being replaced by Homo sapiens. Genetic studies of people living at this important crossover period could help scientists understand when and how this interbreeding took place.

The researchers found that the person from Tianyuan cave carried about the same proportion of Neanderthal and Denisovan DNA as people in the region today.