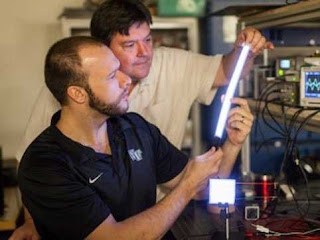 This is not about energy efficiency as we already have that. It is about light quality. This is a major breakthrough on sheer quality and flexibility. We can set up any geometry and I expect we will soon love light panels. A hanging tile gets rid of a lot of hardware we have no need for.

How about a parabolic shell that emits light? The options become endless the moment you are not dealing with a lot of metal and glass in awkward places.

So yes, this technology will meet price point and be outright superior in light quality. It will still roll out slowly but soon become fashionable and everywhere.

We will really have luminescence rooms in a range of colors such as gold that augment the white light we use to see well. Perhaps the darkened room will go out of fashion.

Lighting accounts for about 12 percent of total U.S. energy consumption.

Part of the reason the figure is so high is that traditional incandescent bulbs (Edison's filament bulb) eat up a lot of power to produce light: 90 percent of the energy is wasted as heat.

So far the main alternatives to the common bulb have been compact fluorescent lights, or CFLs, and light-emitting diodes, or LEDs, which can produce the same amount of light as traditional bulbs while using way less energy.

Soon, a fourth lighting option will be thrown into the mix. It's called the FIPEL, which is short for field-induced polymer electroluminescent technology.

"This is the first new light bulb in about thirty years," says Dr. David Carroll, a professor of physics at Wake Forest University in North Carolina, who developed the new light source.

To understand how this technology functions, you can think of how a microwave works, Carroll explains.

Take a potato, for example. When you place your potato in the microwave and press start, the device hits the potato with microwaves that induce what's known as a displacement current, meaning it makes the water molecules in the potato flip back and forth. This heats the potato up. What Carroll and his team have done is develop a special type of plastic that, when hit with an electric current, induces a displacement current in the same way. But in this case, it doesn't give off heat, it gives off light.

The new light source is made of several layers of very thin plastic. Each sheet is about 100,000 times thinner than the width of a human hair. The plastic is inserted between an aluminum electrode and a transparent conducting electrode. When a current is passed through the device, it stimulates the plastic to light up.

Luckily for Carroll, FIPEL has entered the lighting technology ring at a time of unprecedented opportunity. The phaseout of traditional incandescent bulbs began to take effect at the start of the new year under the 2007 Energy Independence and Security Act.

FIPEL’s light quality is unmatched by any technology currently, the product's manufacturer claims.

CFLs use about 75 percent less electricity than Edison's filament bulb to produce the same amount of light. LEDs use even less. This means to make the same light as a 100-watt incandescent, a compact fluorescent uses 23 watts and an LED uses 20.
The FIPEL is slightly more efficient than a CFL bulb and on par with an LED, but comes with a few advantages over these other types of lights. CFLs and other fluorescent light bulbs contain a very small amount of mercury, which can be toxic if not disposed of properly. FIPELs do not use any caustic chemicals in manufacturing and can easily be recycled because they're made of plastic.

Some LEDs give off a blueish tint, which many people don't like to look at. FIPEL, on the other hand, can be made to have any tint, including the yellowish hue of the sun that our eyes have come to prefer, having evolved on Earth.

"FIPEL can match the response of your eye more perfectly than any other lamp ever created," Carroll told Business Insider.

Although the new light source doesn't have the shape of a traditional light bulb — it's more a panel — it is moldable, so it can be customized to fit into conventional light sockets and work with many different types of lamp fixtures.

The FIPEL light has a lifetime of between 25,000 and 50,000 hours, which is comparable to an LED.
Carroll notes one drawback to FIPEL.

The FIPEL technology is currently under an exclusive world-wide license by CeeLite Technologies. David Sutton, management consultant for CeeLite, said the first units for commercial use will be available by the end of 2013. The new bulb will cost less than LEDs and slightly more than CFLs.
"In five years, instead of saying I've got to get a new bulb, you're going to be saying I've got to get a new FIPEL. I do believe that these are going to be ubiquitous,"  says Carroll.


Read more: http://www.businessinsider.com/fipel-lighting-technology-david-carroll-wake-forrest-2013-1#ixzz2IonkOtvG
Posted by arclein at 12:00 AM