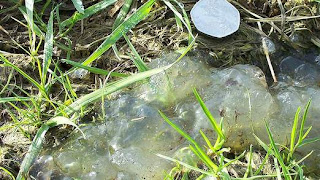 Here we go again. My conjecture regarding a stratospheric slime mold balloon as unreal as it seems continues to bear fruit. Such a balloon would contain methane and rise at night from our swamps into the stratosphere. Very likely they naturally refract the sun's light to produce high altitude lights which I have seen and has also been called Brown lights around mountains were the rising uplifts would jostle them around a lot.

When a meteor strikes, a sharp shock wave is produced and this likely disrupts a large number of such creatures that then fall to earth to appear as blobs of slime. We have seen that phenomena world wide and often associated with a recent meteor event.

Up there we would never even see these creatures unless we had special viewing hardware. To do so we need observation balloons able to reach the stratosphere and some special lighting to create contrast. That should work.

Alternatively, we need to capture images of these forming up and rising out of swamps and that may be much easier although I suspect foam making conditions must exist which we still do not understand. I do not expect to be lucky on this hunt. However lighting should not affect such a search.

Setting up on the banks of the ponds discussed here would be ideal.

An unexplained jelly-like substance which is said to occur during meteor showers has been found on a wildlife park in Somerset.

A "weird" green slime said in folklore to appear at the same time as meteors hit Earth has been found in a birdlife park in Somerset.

The RSPB has appealed for help in identifying the slime, which is said to be scattered on grass banks close to pools and lakes around Ham Wall Nature Reserve near Glastonbury.

The jelly-like substance could be bacteria, fungus or toad innards, wildlife experts said.

Some believe it could be a substance that has been written about for centuries called star or astral jelly, which is said to appear in the wake of meteor showers.

Its appearance has coincided with a meteor strike in Russia and the harmless fly-by of an asteroid at a record distance from Earth last week.

Steve Hughes, the RSPB site manager at Ham Wall, said: "This past week we've been finding piles of this translucent jelly dotted around the reserve.

"(It is) always on grass banks away from the water's edge. They are usually about 10cm (4in) in diameter.

"We've asked experts what it might be, but as yet no one is really sure. Whatever it is, it's very weird."

Tony Whitehead, an RSPB spokesman for the South West, added: "Although we don't know what it actually is, similar substances have been described previously.

"In records dating back to the 14th Century it's known variously as star jelly, astral jelly or astromyxin.
"In folklore it is said to be deposited in the wake of meteor showers."

One of the more favoured explanations is that it is a form of cyanobacteria called Nostoc.

Others suggest that it is the remains of the regurgitated innards of amphibians such as frogs and toads, and of their spawn.

Alternatively, it may be related to the intriguingly named crystal brain fungus.

"One suggested it was neither animal nor plant, and another that it didn't contain DNA, although it does give the appearance of something 'living'.

"Our reserve team will be looking out for the slime over the next few days, but if anyone can offer any explanations we'd be glad to hear."

The public are being warned not to touch the mystery substance, and to inform nature reserve staff if they spot any.