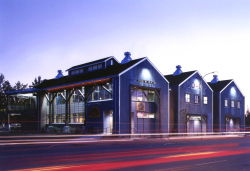 In the past, demand for local food was undeveloped and farmers found themselves competing with truckers happy to often dump in order to not have to haul it home. The farmers advantage was that their product was fresh and gave the retailer days more to sell the product.

That demand is now developing and it does not take too much to make serious inroads in the local market share. Also the cost of local processing is now very competitive also. Just what does it take for a local farmer to can a field of tomatoes himself? Add in various other crops and local partners with their own fields and we suddenly have a local value added product good for year round sales.

None of this is too difficult and the locavore movement will naturally drive this market.

Another point to note here is that if we can make it work in remote Montana then just about anywhere is fine.

Big Sky’s the limit: How to make local food lucrative in Montana

You wouldn’t think that a place like the Community Food Co-op in Bozeman, Mont., has much work to do when it comes to sustainability. Yelp reviews describe the place variously as “perhaps the nicest cooperative grocery in the country,” with “local, organic, down-to-earth options” and patrons that fit “the stereotypical Bozeman granola or hippie type.” In this college town of 38,000 people, the co-op boasts 20,000 members — a sign that it must be doing something right.

But even with that kind of green cred, there’s room for improvement. Despite its longstanding commitment to sourcing locally, the co-op still managed to double the amount of local food it purchased in 2012, and saw sales rise accordingly — joining the growing ranks of institutionsaround the country getting serious about connecting people with local farms and food.

The Community Food Co-op has two locations, both of which sell deli food that’s prepared at a large central kitchen in a separate building. Though the stores’ produce departments offer some local fare, until recently, the central kitchen relied mostly on a large out-of-state distributor to provide the ingredients for its soups, sandwiches, and hot meals (things like stir-fried veggies, mac ‘n’ cheese, sweet-and-sour tofu, and fried rice). The alternative — working directly with growers — is much more labor-intensive, not to mention risky. As central kitchen manager Christina Waller puts it, “It’s hard to know when you’re going to get a hailstorm.”

Waller, who’s 36 and hails from Atlanta originally, studied nutrition as an undergraduate and always valued good food, but her job at the co-op — she started in 2006 — was the “catalyst,” she says, that pushed her to get a master’s degree in sustainable food systems. Inspired to put what she’d learned into practice, Waller started volunteering at Bozeman’s Three Hearts Farm, where farmer Dean Williamson grows everything from spinach to fava beans and lemon cucumbers on his seven acres.

She saw the abundance of good food growing there — all without pesticides — and compared it to the produce trucked in to the co-op from Spokane, Wash. “After a week out [on the farm], I was like, ‘Why don’t we have more local produce?’”

Waller started asking other local farmers about buying wholesale produce. For small growers who typically sell to CSAs and farmers markets, bulk orders can require some scrambling. “It was a new thing for them, for us to suddenly be asking for hundreds of pounds of produce,” she says, so she made it clear that she was open to working with what the farmers had available. If a cool summer led to a paltry tomato crop, for example, she could supplement with inferior trucked-in versions; if a local grower had an abundance of squash, then butternut squash soup could become a daily staple instead of a weekly special.

“Making that commitment to buy the food and deal with all the unpredictables — it takes a leap of faith,” says Williamson, who’s only been farming for five years (but “it feels like a lifetime.”) “Until you see it work.”

And it did work, thanks in no small part to Waller’s gung-ho approach to the demanding task of building partnerships with, and balancing supply from, at least a half-dozen different small farmers. Such strong partnerships make the investment worth it: “I know [the co-op is] going to give me a fair price, so I’m going to give them great food,” Williamson explains.

Conventional wisdom has it that local food commands a prohibitively high price — for its superior taste, freshness, and market cache, as well as the labor that would be taken over by middlemen in a larger operation — but Waller found that to be the case for only some items. With others, like zucchini, cabbage, broccoli, and cauliflower — things easy to grow and harvest in Montana — “our prices were less than what we’d be paying for large distributors, and [the food was] honestly so much better.”

Plus, buying from local farmers means less waste. “Cisco is infamous for packing their greens in 20-pound bags,” Williamson says. “The bottom three or four pounds are useless when they show up. Because we’re close by, we can package in a way that everything shows up fresh.”

Waller made it a goal to spend an average of $2 per pound overall, and by the end of the season, she found that her costs had evened out to $1.98 per pound. And once customers caught on to the fact that the co-op’s prepared foods were now made with higher-quality local ingredients, sales soared. In one telling example, the co-op sold nearly $12,000 worth of pies made with local pumpkin this past Thanksgiving, compared to just $5,000 worth of non-local pumpkin pies over the same time period in 2011.

Now that she’s seen her investment in local food pay off, Waller is ready to take it to the next level. She plans to streamline her system with spreadsheets and a set ordering schedule. She’s also applied for a USDA grant to buy some large processing equipment, so that this year the co-op can purchase several times the amount of local, seasonal produce it bought last year and preserve it for year-round use in its prepared foods.

Waller tested out this idea by stocking up on produce at the end of last summer and seeing which preserved items would be popular. She tried pesto, then “killed it with kimchi,” according to Williamson. “It flew off the shelves.”

For farmers like Williamson, this system “essentially allows me to grow 10,000 pounds of kale, or whatever, and they flash-freeze it and have kale for salads and soups all year,” he says. And for customers, “Now you’ve got access to food that’s grown right down the street 365 days [a year]. That’s the game changer.”

The central kitchen’s operation closely mirrors the way larger institutions like schools and hospitals prepare food, offering a glimpse of how it might be possible for such organizations to shift their sourcing through a similar focus on processing and preserving. Of course, the co-op is an autonomous, member-owned body that has far more control over its budget than public schools do. Still, all over the country, school districts, corner stores, restaurants, government programs, farm shares, social-justice groups, and Native American tribes are finding ways to make local, sustainable food the rule — not the exception — for the populations they serve, despite lean budgets and small staffs. As a result, sales from farms directly to buyers havedoubled in the past 20 years.

For the co-op, part of this year’s goal is to spread the gospel to anyone interested in following its example. “Our plan is to take this model and knock on every door in town and say, ‘You need to do this; it works,’” Williamson says.

“Every school or institution that finally takes the chance and does this — it always seems to end up working out,” says Waller. “And the food is so much better. I knew it would be in theory, but it really has made a huge difference. And it’s definitely increased sales, no doubt about that.”