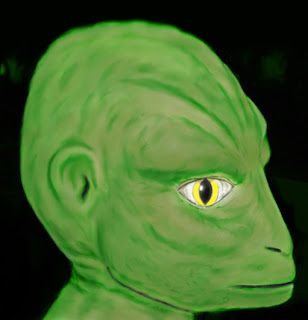 I have posted several reports now about these lizard beings. They are all rather substantial in terms of detail and relay a tale of an evolved Terran race established on Earth for millions of years. This is a creditable proposition as even the fossil record supports that possibility. Almost all encounters appear either underground or close to such access.

It is relayed to us that these creatures reside deep underground in large formed habitats with ample access to the surface for rare intrusions. Again we are entering a future in which our mastery of material strength will allow superior underground construction. We do fine at present, but it is clear also that a lot better is plausible and desirable.

What we do get is rare close encounters and they will chase us off. In this case, they were surprised by the fire power and simply bugged out. That was the only rational thing to do.

Very important here is the description of the cave itself. The sides are smooth, with precise grooving and are tapered toward the top to distribute pressure. It is clearly a correct design model that we do not use at all because we still rely on blasting. This is completely new information.

Most certainly this entry was then open. The grooves would likely carry a blocking plug that was then retracted. This is again advanced methodology meant to prevent unnecessary discovery.

As an aside, way more data has been shared in a couple of separate reports than we have for any other oddity.  Most important though is that they claim to be non alien and as mankind could also move underground if it proved desirous as our culture advances, none of this is unreasonable.  My difficulty is that we have on hand several deeply detailed reports regarding several plausible scenarios that are best described as unique, unconfirmable (This one by way is confirmable and likely has been ) and way too good to be true.  They all could easily have been lifted out of 1930's pulp fiction.

In short, they are stories that are too well written and that i could have made up out of whole cloth myself.  you get the point.

During the past months I have collected anecdotes from readers who had personal experiences or were told of cryptids / anomalous encounters in Vietnam and other parts of Indochina. I received a particular narrative that was much different than the others that had been forwarded to me...so I decided to publish it separately. The post is a compilation of 3 emails, which included answers to a few of my questions. The man who provided this information was, at the time of the incident, a U.S. Army corporal...who has since retired from the military after a lengthy career. He did not give me specifics as to his unit and mission...but feels strongly that his experience should be told. He provided two identification references, which checked out. Overall, this man served a distinguished military career and his reputation is quite admirable from what I have seen. Some of the information has been edited at the request of the witness: [Lon]

In 1970 I was serving as a corporal in the U.S. Army – deployed to South Vietnam in an region about 30 miles south of the DMZ. At the time I was second-in-command of a squad of soldiers. We had setup a bivouac in a jungle area that had a few steep hills. That evening my section was ordered to patrol one of the small valleys west of the encampment. We moved out led by our sergeant.


Not long after entering one of the small valleys we detected movement ahead of us. It seemed to be scattered activity, so we doubted it was VC but we weren’t positive. We hunkered down for about 15 minutes getting occasional glimpses of something moving within the trees and brush. There wasn’t enough light to detect what we were observing even though the moonlight was bright that night.


After awhile the activity halted, so we continued to move slowly through the valley. As we approached a sheer wall on the hill it looked like someone or something had stacked large stones and boulders in the pass in front of us. There was also an opening in the hill side that looked like a cave entrance – approximately 5 foot high and 3 foot wide narrowing at the top. When observing the passageway, it appeared to have been cut away by machinery – the edges were smooth with small even-spaced grooves.


We were puzzled by this because we had never seen enemy caves like this – just underground tunnels. The sergeant suggested that it may be a VC supply depot, so we started to assess how we were going to investigate the cave.


About this time, things got very strange.


We began to notice a putrid odor emanating from the cave entrance – the only thing I can compare it to was rotting eggs and human decay. It was so revolting that a few of the soldiers were becoming ill and started to back away into the jungle – including the sergeant. I was directing a light into the entrance in order to observe anything, but there was a haze that was impossible to see through. We had no idea what was before us.


The entire squad took a position in the heavy brush approximately 150 feet from the entrance – far enough not to be detected but close enough to observe the cave entrance. We quietly remained there for what seemed like forever. The jungle was strangely calm though we heard rumbling sounds coming from the distance. It was really eerie. The sergeant was sitting near me talking to himself - it was obvious that he was frightened. I was looking at the rest of the squad – each had wide eyes and scanning the area. No one was going to doze off during this patrol.


After several hours, dawn was approaching and it started to lighten up. I checked my watch – it was just before 0500 hours. Just then we noticed movement in front of the cave. A being (I first thought it was a man) moved through the entrance into the clearing in front of the cave. As it stood up from a crouch it stood at least 7 foot high and started to look in our direction. At that time, another similar-looking creature was moving out of the cave. They were making hellish ‘hissing’ sounds and looking directly at us.


The only way I can describe these beings is that they looked like upright lizards. The scaly, shiny skin was very dark – almost black. Snake-like faces with forward set eyes that were very large. They had arms and legs like a human but with scaly skin. I didn’t notice a tail – though they wore long one-piece dark green robes along with a dark cap-like covering on their heads. I never noticed if they had anything on their feet.


No one gave the order – it seemed like the entire squad opened fire at once. Every piece of vegetation between us and them was quickly sheared away. I yelled out a cease-fire order – at the same time I was looking in the direction of the cave. There was nothing there. We immediately checked our flank in case these things circled around us – but there was nothing.


As we approached the cave, ready to resume action if needed, it became apparent that the beings had escaped – most likely back into the cave. It was soon decided to set charges and close the cave entrance.


When we returned to camp we all seemed to be in a daze. There was little discussion of the incident and we were never debriefed – so I know the sergeant never filed a report. Then again, if he did, it was kept quiet by the brass.


NOTE: Well...I told you. None of the anecdotes or narratives I received match this one. But then again, I never know what will turn up in my mailbox. I look forward to receiving your well-written sighting and incident reports. Thanks...Lon