Scientists Confirm Tetrahedral Model of the Molecular Structure of Water 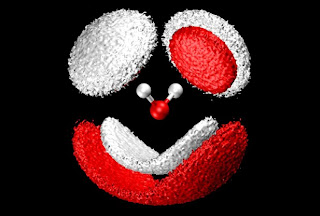 At least we are looking closer at the nature of water bonding. What will be welcome is when we can add the odd impurity and discover the implied effect. That will revolutionize chemistry. We are certainly close.

What continues to surprise is the complexities of water as theory. Everything else appears simple.

Scientists confirm tetrahedral model of the molecular structure of water

Researchers at Johannes Gutenberg University Mainz (JGU) have confirmed the original model of the molecular structure of water and have thus made it possible to resolve a long-standing scientific controversy about the structure of liquid water.

The tetrahedral model was first postulated nearly 100 years ago and it assumes that every water molecule forms a so-called hydrogen bond with four adjacent molecules. This concept was almost toppled in 2004 when an international research group announced that it had experimentally established that water molecules form bonds only with two other molecules.

"The quality of the results was excellent but they merely represent a snapshot of the situation," explained Professor Dr. Thomas Kuhne. He has demonstrated the fallacy of the 'double bonding' theory using computer simulations based on new types of combinations of two computational methods recently developed by his group.

Some very special and unique features of water, such as its liquid aggregate state and high boiling point, are attributable to the effect of the hydrogen bonds between the water molecules.

The H bonds are formed due to the different charges carried by the oxygen and hydrogen atoms that make up water molecules and the resultant dipolar structure. The traditional, generally accepted view was that water had a tetrahedral structure at room temperature, so that on average each water molecule would be linked with four adjacent molecules via two donor and two acceptor bonds.

"In our theoretical approach, the median result we observed over time was always for quadruple bonding," said Kuhne. Thanks to the new simulations, he and his colleague Dr. Rhustam Khaliullin have now been able to confirm the old model and also supply an explanation for why double bonding was observed in 2004. According to Kuhne, the result was not indicative of double bonding "but of instantaneous asymmetrical fluctuation" only.

There is thus significant asymmetry in the four H bonds of the tetrahedral model because of the different energy of the contacts. This asymmetry is the result of temporary disruptions to the hydrogen bond network, which take the form of extremely short term fluctuations occurring on a timescale of 100 to 200 femtoseconds.

These fluctuations mean that one of the two donor or acceptor bonds is temporarily much stronger than the other. But these fluctuations precisely cancel each other out so that, on average over time, the tetrahedral structure is retained.

The results reported in 2004 using x-ray absorption spectroscopy were obtained using water molecules with high levels of momentary asymmetry, which is why essentially only two strong hydrogen bonds were observed in an otherwise tetrahedral structure.

"Our findings have important implications as they help reconcile the symmetric and asymmetric views on the structure of water," write the scientists in an article published in Nature Communications. The results may also be relevant to research into molecular and biological systems in aqueous solutions and provide insight into protein folding, for example.

The work of Thomas Kuhne's group was undertaken within an interdisciplinary joint project and was funded by the Research Unit Center for Computational Sciences at Johannes Gutenberg University Mainz; T. D. Kuhne, R. Z. Khaliullin, Electronic signature of the instantaneous asymmetry in the first coordination shell of liquid water, Nature Communications 4, 5 February 2013