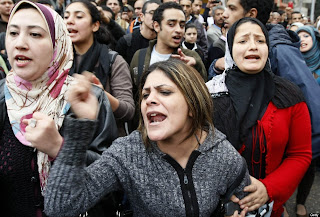 I find this very interesting.  It is clear that the political elite were way too small to find a way to easily transform itself into an acceptable alternative.  Worse its only tool to retain command and control is the use of repression and that is both convincingly countered and also eliminated through the dispersion of the secret police.

The obvious solution as applied elsewhere is to organize the local demos as a first level of democratic regeneration to produce a fresh cadre of leaders.  This cadre can then produce a parliament to legislate change and implement economic change.

Outsiders forget that the population is 100,000,000 and that means that no particular ethnic group has true power.  Thus we are going to see a rationalization of the polity that is truly inclusive.  This may sound optimistic, but I am now discerning trends not clear before.  The radicals have already been beaten back into their holes by this demos.

The only way out is for an astute leader to arise who knows how to be inclusive.  Thus, history demands he will arise or be so transformed.

In strategic terms, the Arab Spring is shaping up as a massive defeat for Islamism and a stunning victory for who now acts as the indispensable shield and economic anchor on the Egyptian eastern flank.  When becomes fully functional, with an inclusive regime and a powerfully subdued Islamism, it can normalize relations with to jump start the Egyptian super economy.

This may seem far fetched, but I no longer think it is impossible.  Recall that likes to lead and it owes no one and most certainly not the Arabs.  Thus an ascendant is well served by a defacto alliance with a powerful Israeli shield to chill any remaining Arab ambitions.

Why 's Revolution Is So Different

Entering the third year of the revolt in , no amount of repression seems able to contain the swelling pressure exploding throughout the country the last several weeks. In fact, protests against the Muslim Brotherhood government of President Mohammed Morsi seem to be gaining support. The truth is, the revolution in is deeper and more profound than any of the other valiant examples of the Arab Spring.


“We are not always coming together in protests,” 28-year old unemployed accountant, Saber, told me as he arrived for a demonstration in last week. “Most workers have families which they must feed, so they go to work. Other youth, like myself, have nothing to lose. Our future is past.”


As Saber explains, political sympathy among the population cannot always be measured in the size of the recurring protests. But for sure, the rebellion remains alive.


When Hosni Mubarak’s dictatorship fell on Feb. 11, 2011, the decayed state structures collapsed along with him. Social and political institutions running Mubarak’s regime were in complete shatters. His regime was exposed as a very thin layer of corrupt officials and family friends.


All these steps occurred under pressure of the mass revolt.


This sweeping disintegration was unique to and it had revolutionary consequences because the political and social void was filled by an energized people raising demands unrestrained by residual conservative institutions and parties.


The authentic voice of the Egyptian people was heard without filters and this form of direct action politics put unprecedented pressure on authorities to enact meaningful reforms.


The 500,000-strong army was the only Mubarak institution left standing. It was also quite unscathed because it had historically avoided conflicts with the population, leaving that abhorrent chore to the despised Ministry of Interior security force.


It was left to the Supreme Council of the Armed Forces (SCAF), therefore, to fill the empty political space. There was no credible alternative representing the old order.


But, as it turned out, the prestige enjoyed by the army did not last out the year. Protests against military violence and arbitrary military trials grew increasingly larger until the Muslim Brotherhood government finally took over in 2012.


Now this government, after only six months in power, faces the same stiff resistance to its rule as did the military.


Yet, the struggle continues at a high level in because, as I argue, the unfiltered voice of the people is being heard through the organization of street protests.


By contrast, in , a massive trade union confederation helped lead the revolt. It became a huge factor in initially stabilizing and giving credibility to the new post-revolutionary regime and Parliament. Currently, however, this government is undergoing severe criticism for failing to lead the country out of economic stagnation and for including many remnants from the regime of ousted dictator Ben Ali.


Nonetheless, despite its current problems, there was definitely a period of stabilization and broad acceptance of the initial transition in that simply never emerged in .


In fact, the new Egyptian Parliamentary elections in 2011 were immediately met with controversial charges of Muslim Brotherhood manipulation. The reputation of the newly elected parliament was further eroded after legislators failed to enact even one meaningful reform.


Even an increase in the minimum wage was enacted in 2011 by a court, not by parliament. And there are credible charges that the government has since actually obstructed its implementation.


As a result, millions have no confidence in the governing institutions reconstructed since Mubarak.


Unsolved Economic Tasks of the Revolution


Democratic and justice concerns of Egyptians are compounded by growing concerns for the third demand of the Jan. 25, 2011 revolt – bread!


The economy has actually worsened since Mubarak fell. The Egyptian pound suffered seven percent inflation since December, tourism is down some 20 percent, petrol subsidies have been reduced and President Morsi very cautiously floated in December possible sales tax hikes, food and commodity subsidy reductions and cuts in the number of state employees as a result of International Monetary Fund loan stipulations.


Furthermore, according to historian Prof. Joel Beinin, “the Muslim Brothers embrace the same neoliberal policies favored by the Mubarak regime and, if anything, envision an even more expansive program of privatization of public assets.”


When I cited World Bank statistics claiming 40 percent of Egyptians live on two dollars a day, Mohammed, a thirty-two old physical therapist with two children, immediately interrupted me to say that it is “below two dollars a day now! Doctors working in a hospital like me, we must work three jobs with four or five extra shifts and even then I have to postpone paying all my bills to the last minute.”


His friend, Mahmoud, is also a doctor and agreed. “It is worse now. The rich are still rich but the poor are more poor. And, when John Kerry came to , he met with Morsi and other top leaders. He did not meet with poor people like us. The likes to support those in charge.”


Asked if people are getting tired from all the protests, Mohammed matter of factly responded that “we will not get tired because nothing has changed.”


Saber, the unemployed accountant, explained further: “We chose Morsi. We thought his religion would make him more compassionate and he would listen to us. But now after six months, it is worse. So we come back to Tahrir to make another revolution.” And he very consciously added in response to my questions about the government, the military and the parliament that “we must do this ourselves.”


Thus, the voices heard in Tahrir and in protests throughout the country demanding genuine democracy, real social justice and significant economic improvements hold more credibility among the majority of Egyptians than any of the institutions of power and it is this reality that keeps the rebellion growing.


But history also teaches us the hard lesson that state institutions representing old elite powers, no matter how unresponsive, can recover by disguising their goals and by making compromises with sections of their opposition whose economic interests are not so very different from their own.


Of course, this would mean once again that the majority of Egyptians would be left out in the cold.


As an alternative, a new Egypt can arise when the youth, unemployed, women and working class, sharing similar economic objectives, unite nationally in a new, mass political force that combines electoral and direct action mobilizations challenging the power of the elite to finally establish a democratic, just and economically prosperous society benefiting the majority.


The future of this great country will be determined by which social force, the bottom or the top, actually succeeds in filling the political void that so far has made ’s revolution so unique and so powerful.
Posted by arclein at 12:00 AM

Why is the whole focus of this revolution on who will rule? This is a dead end. Rule is a dead end. The answer to the problem of government is to abolish it, not try to reform centralized power. The people can rule themselves ONLY if they do give their power away to a gang of politicians. The only market that works is a free market, and that means no gov't interference. The free exchange of goods, services, and ideas creates order out of what appears to be chaos. Trust freedom. It works.