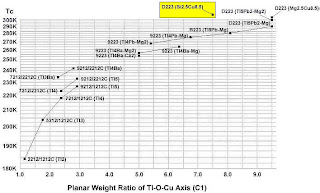 Even better the material produced has far better characteristics for working with. What is important is that this work has produced a class of products able to operate at thirty degrees Celsius and that makes it practical for normal operating conditions and regular cooling arrangements. Sooner or later, we are going to produce a monolayer on a working substrate and be able to actually use it.

Joe Eck has been leading the way in this work for a number of years and has been making incremental advances and obviously continues to do so.

As previously posted, this technology is necessary for manufacturing the Magnetic Field Exclusion Vessel of MFEV a reported in my article published in Viewzone in 2007.


Superconductors.ORG (Joe Eck) reports the 30 Celsius superconductor discovered in December 2012 has been successfully reformulated to advance high Tc to above 35 Celsius (95F, 308K). This was accomplished with a simple substitution of tetravalent silicon into the magnesium atomic sites. The chemical formula thus becomes Tl5Pb2Ba2Si2.5Cu8.5O17+. This is the third material discovered with a critical transition temperature (Tc) above room-temperature.


Joe Eck is a lone researcher who has had some previous work published in smaller journals and some other researchers have copied his work and had them published. He detects magnetic transitions that indicate likely superconductivity but the material has a low percentage of superconducting material and needs to be processed and purified. He has not been able to get the interest or cooperation of larger institutions. Joe has also done work to improve the formulation of YCBO superconducting materials

Multiple magnetization tests were performed on two separate test pellets to confirm this exceptionally high Tc. The highest and lowest measurements on the first sample ranged from 37.1 C to 35.8 C. The second pellet produced diamagnetic transitions between 37.5 C and 35.5 C. The average of all the tests was just under 36 Celsius. The flashing lines in the two plots at page top represent the average of the noise component skewing apart near 36 C in both warming and cooling test cycles


With an ionic radius smaller than magnesium (0.4 Å - vs - 0.72 Å) silicon will occupy the same atomic sites in the "Light" region of the C1 and C2 axes as magnesium does. This is illustrated in the D9223 graphic at left with an arrow pointing to the Si-Cu plane. Though the planar weight ratio is lower with silicon than with magnesium, the Cu02 planes clearly benefit from being electron-doped.


Below is the plot of a second sample pellet, synthesized and tested three days after the first pellet. The plot again shows an unambiguous diamagnetic transition just below 36 C. Resistance tests were not possible with this formulation, as the non-superconductive bulk material i

The idea that silicon might be an acceptable substitute for magnesium came from two prior discoveries that included silicon. The proto-compound TlSiBa4Tm2CaCu5Ox produced a minority phase with Tc near 208 Kelvin. And (Tl0.5Pb0.5Si)Sr4TmCaCu4Ox produced a minority phase with Tc near 213 K. The only way for such high transition temperatures to result from such small unit cells was if silicon was occupying both the C1 and C2 axes.

A dot and yellow rectangular box have been placed within the C1 plot below, depicting where D223(Si2.5Cu8.5) lies relative to the other high performance thallium copper-oxides. Even though the PWR-v-Tc has decreased along the C1 axis, with this formulation the rich electron doping of the CuO2 planes has increased Tc well above the curve of its progenitors.