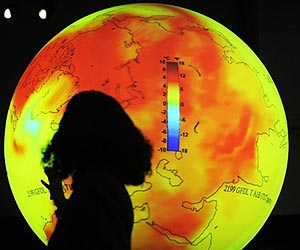 Needless to say, the past thirteen years of zero change has cut down the modeling projections. What is not mentioned here is that the sensitivity to CO2 forcing is hugely cut if not even zeroed out. Quite simply, if any part of the rise in the nineties was due to CO2, where did it go in the past thirteen years? You cannot claim one without addressing the other. It be comes way easier to outright dismiss CO2 forcing.

It is within human capacity to change the climate. It is just not likely to be by burning a lot of coal. Nature manages CO2 way too well. More wisely we need to reforest the Sahara and the Middle East. This would restore Bronze Age conditions which would be a good thing and allow global populations to double at least.

In the meantime we do have a cyclic warming trend that is post Little ice Age and no proper explanation for that event. It is my conjecture that it is driven by a thousand year long cycle of the southern circupolar current that manages the injection of cold water into the Atlantic Basin.

by Bard Amundsen and Else Lie


Policymakers are attempting to contain global warming at less than 2C. New estimates from a Norwegian project on climate calculations indicate this target may be more attainable than many experts have feared.

"These results are truly sensational," says Dr Leck. "If confirmed by other studies, this could have far-reaching impacts on efforts to achieve the political targets for climate."

Temperature rise is levelling off

After Earth's mean surface temperature climbed sharply through the 1990s, the increase has levelled off nearly completely at its 2000 level. Ocean warming also appears to have stabilised somewhat, despite the fact that CO2 emissions and other anthropogenic factors thought to contribute to global warming are still on the rise.

It is the focus on this post-2000 trend that sets the Norwegian researchers' calculations on global warming apart.

Climate sensitivity is a measure of how much the global mean temperature is expected to rise if we continue increasing our emissions of greenhouse gases into the atmosphere.

CO2 is the primary greenhouse gas emitted by human activity. A simple way to measure climate sensitivity is to calculate how much the mean air temperature will rise if we were to double the level of overall CO2 emissions compared to the world's pre-industrialised level around the year 1750.

If we continue to emit greenhouse gases at our current rate, we risk doubling that atmospheric CO2 level in roughly 2050.

A number of factors affect the formation of climate development. The complexity of the climate system is further compounded by a phenomenon known as feedback mechanisms, i.e. how factors such as clouds, evaporation, snow and ice mutually affect one another.

Uncertainties about the overall results of feedback mechanisms make it very difficult to predict just how much of the rise in Earth's mean surface temperature is due to manmade emissions. According to the Intergovernmental Panel on Climate Change (IPCC) the climate sensitivity to doubled atmospheric CO2 levels is probably between 2C and 4.5C, with the most probable being 3C of warming.

In the Norwegian project, however, researchers have arrived at an estimate of 1.9C as the most likely level of warming.

"In our project we have worked on finding out the overall effect of all known feedback mechanisms," says project manager Terje Berntsen, who is a professor at the University of Oslo's Department of Geosciences and a senior research fellow at the Center for International Climate and Environmental Research - Oslo (CICERO). The project has received funding from the Research Council of Norway's Large-scale Programme on Climate Change and its Impacts in Norway (NORKLIMA).

"We used a method that enables us to view the entire earth as one giant 'laboratory' where humankind has been conducting a collective experiment through our emissions of greenhouse gases and particulates, deforestation, and other activities that affect climate."

For their analysis, Professor Berntsen and his colleagues entered all the factors contributing to human-induced climate forcings since 1750 into their model. In addition, they entered fluctuations in climate caused by natural factors such as volcanic eruptions and solar activity. They also entered measurements of temperatures taken in the air, on ground, and in the oceans.

The researchers used a single climate model that repeated calculations millions of times in order to form a basis for statistical analysis. Highly advanced calculations based on Bayesian statistics were carried out by statisticians at the Norwegian Computing Center.

When the researchers at CICERO and the Norwegian Computing Center applied their model and statistics to analyse temperature readings from the air and ocean for the period ending in 2000, they found that climate sensitivity to a doubling of atmospheric CO2 concentration will most likely be 3.7C, which is somewhat higher than the IPCC prognosis.

But the researchers were surprised when they entered temperatures and other data from the decade 2000-2010 into the model; climate sensitivity was greatly reduced to a "mere" 1.9C.

Professor Berntsen says this temperature increase will first be upon us only after we reach the doubled level of CO2 concentration (compared to 1750) and maintain that level for an extended time, because the oceans delay the effect by several decades.

The figure of 1.9C as a prediction of global warming from a doubling of atmospheric CO2 concentration is an average. When researchers instead calculate a probability interval of what will occur, including observations and data up to 2010, they determine with 90% probability that global warming from a doubling of CO2 concentration would lie between 1.2C and 2.9C.

This maximum of 2.9C global warming is substantially lower than many previous calculations have estimated. Thus, when the researchers factor in the observations of temperature trends from 2000 to 2010, they significantly reduce the probability of our experiencing the most dramatic climate change forecast up to now.

"The Earth's mean temperature rose sharply during the 1990s. This may have caused us to overestimate climate sensitivity.

"We are most likely witnessing natural fluctuations in the climate system - changes that can occur over several decades - and which are coming on top of a long-term warming. The natural changes resulted in a rapid global temperature rise in the 1990s, whereas the natural variations between 2000 and 2010 may have resulted in the levelling off we are observing now."

Climate issues must be dealt with

Terje Berntsen emphasises that his project's findings must not be construed as an excuse for complacency in addressing human-induced global warming. The results do indicate, however, that it may be more within our reach to achieve global climate targets than previously thought.

Regardless, the fight cannot be won without implementing substantial climate measures within the next few years.

The project's researchers may have shed new light on another factor: the effects of sulphur-containing atmospheric particulates.

Burning coal is the main way that humans continue to add to the vast amounts of tiny sulphate particulates in the atmosphere. These particulates can act as condensation nuclei for cloud formation, cooling the climate indirectly by causing more cloud cover, scientists believe. According to this reasoning, if Europe, the US and potentially China reduce their particulate emissions in the coming years as planned, it should actually contribute to more global warming.

But the findings of the Norwegian project indicate that particulate emissions probably have less of an impact on climate through indirect cooling effects than previously thought.

So the good news is that even if we do manage to cut emissions of sulphate particulates in the coming years, global warming will probably be less extreme than feared.

Geophysicists at the research institute CICERO collaborated with statisticians at the Norwegian Computing Center on a novel approach to global climate calculations in the project "Constraining total feedback in the climate system by observations and models". The project received funding from the Research Council of Norway's NORKLIMA programme.

The researchers succeeded in reducing uncertainty around the climatic effects of feedback mechanisms, and their findings indicate a lowered estimate of probable global temperature increase as a result of human-induced emissions of greenhouse gases.

The project researchers were able to carry out their calculations thanks to the free use of the high-performance computing facility in Oslo under the Norwegian Metacenter for Computational Science (Notur). The research project is a prime example of how collaboration across subject fields can generate surprising new findings.

The assertion that CO2 level and global warming are related, then attributing global warming to the effects of elevated CO2 levels can only be observed to be an assertion of ignorance or deceit, when the warming PRECEDES the CO2 level increase. Generally speaking, biological growth increases with warming temperatures, consequentially producing higher CO2 emissions from aspiration and decay which occur AFTER the period of warming. Factually, our statistics on global warming and CO2 levels document the rise of temperature, followed after a logical period by a rise in CO2. This process is logical and has been scientifically documented showing cyclical rise and fall for thousands of years of temperature, followed by rising CO2. So, who is the more fool, the purveyors of false information or those who are fooled by the deceivers? Good intentions do not trump the truth.

The only thing Extreme about "global warming" is the extreme idiots and profiteers pushing it to line their pockets with the sheeple`s money.