Fighting Back Against Citrus Greening 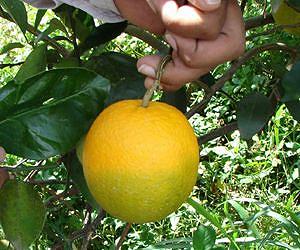 As with most crops, nasty diseases take their toll in production. We have here a key problem with orange production and learn to what extent it is possible to continuing the harvest of affected trees. Pretty well it turns out although production itself is curtailed. At some point the tree itself will still come out early.

This impacts the citrus trade and will be a problem for years to come. The result will be an underlying taste of bitterness in processed orange juice. That may have to be neutralized if it can be. If I recall correctly it has been done in other cases.

Perhaps there is an opportunity for resistant varieties and farm based processing for a high quality product. We know the market will pay for top end quality that can be farm labeled.

Fighting Back Against Citrus Greening

by Dennis O'Brien for USDA News

Oranges from trees infected with Huanglongbing (citrus greening) can be used for orange juice as long as they are mixed with other oranges, according to new ARS research.


U.S. Department of Agriculture (USDA) scientists in Fort Pierce, Fla. are helping citrus growers and juice processors address the threat posed by Huanglongbing (HLB), a disease that is costing the citrus industry millions of dollars each year.

Citrus trees infected with HLB, also called citrus greening, usually die within five to 10 years. Fruit on infected trees often falls to the ground before harvest, and fruit that remains on trees may become misshapen and sometimes only partially ripen.

Supervisory horticulturalist Elizabeth Baldwin with USDA's Agricultural Research Service (ARS) in Fort Pierce is investigating the effects of HLB on the taste of orange juice produced from diseased trees. Her goal is to provide help while a permanent solution is found.

She and her colleagues at the agency's U.S. Horticultural Research Laboratory evaluated fruit with or without HLB symptoms-produced over two growing seasons-for a number of fruit and juice characteristics.

They found that orange juice from the fruit with HLB symptoms was often higher in limonin and nomilin, compounds that can give the juice a bitter taste, but that the compounds were generally below levels that could be detected by human taste panels. Their results were published in the Journal of Agricultural and Food Chemistry.

In another study, they investigated how HLB infection affects juice quality in the same three varieties of orange with respect to cultivar, maturity, and processing methods.

The results showed tremendous variability, depending on the harvest date and variety of orange. In general, the researchers found more of a problem with off-flavored juice from diseased Hamlin orange trees than with diseased trees of the Valencia and Midsweet varieties.

But the researchers concluded that using some fruit that has HLB symptoms would not cause problems in commercial operations as long as fruit with and without symptoms, harvested from several varieties, locations, and seasons, was mixed together. Those results were published in the Journal of Food Science.