Comet of the Century 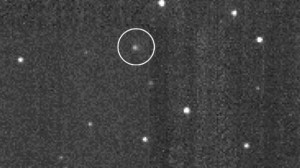 This comet appears very promising and we are long over due for a spectacular event. The comment here is that the tail is formed from complex molecules. That is the accepted explanation. It is my conjecture that the bulk of the dust is in the form of elemental carbon which naturally charges up as it passes through the solar flux. That acquired charge naturally produces a huge halo.


This one is in the high end of probability so sit back for a neat ride. It is too bad we cannot get something up there to intercept it and recover samples.

In the meantime it is time to put it on our watch list.

Will This Be The Comet Of The Century?

NASA’s Deep Impact probe has captured images of Comet C/2012 S1 (ISON), as it moves past the orbital distance of Jupiter on what may be its first trip inwards to the Sun, and possibly a spectacular show.

Comets are notoriously fickle beasts. Chunks of primordial rock, dust, and volatile ices that formed some 4.5 billion years ago around our fledgling sun, they can occasionally fly on Icarus-like orbits that bring them to the inner solar system.
Increasing solar irradiation warms their surfaces and sublimates components like solid water and carbon dioxide – creating great tails of reflecting gas and glowing ions, along with streams of dusty carbon compounds and silicates.
Some of these bodies are on long elliptical orbits that bring them back again and again to the inner solar sanctum. Halley’s comet for example has an approximately 75 year long orbit, and its glowing passage has been recorded by humans some 29 times and probably seen many more.
Others fall inwards from a still mysterious region beyond all known major and minor planets – the Oort cloud. This detritus from our solar system’s youth exists somewhere between about 2,000 and 50,000 times further from the Sun than the Earth is, perhaps even stretching to a light year from us.
It’s these long-period comets (each of which may or may not ever visit us again) that have the greatest potential to light up the brightest as they fall inwards, since they may be essentially pristine, their volatiles ripe for a spot of solar heating.
Comet C/2012 s1, or ISON  (International Scientific Optical Network) was discoveredin September 2012 by Russian astronomers Vitali Nevski and Artyom Novichonok. It’s an extremely promising candidate for becoming a truly spectacular object both before and after its closest solar approach of 800,000 miles on November 28th 2013.

Of course we’ve all heard this before. Over the years many newly spotted cometary bodies have been touted as ‘the next great comet,’ only to sputter and fizzle to something less than impressive. The problem is that the precise composition and physical structure of any cometary chunk is hard to predict, as is its reaction to increasing temperatures. No two cometary bodies are the same.
But we keep hoping, because a bright comet is something amazing, and over centuries and millennia there have been some truly great ones. Last century, in 1910, the “Great January Comet of 1910″ (C/1910 A1) was visible during the day and lasted a couple of months. The Great Comet of 1882 became bright enough in September of that year (around its closest approach to the Sun) to be visible in the sky adjacent to the Sun. And there have been many more witnessed across human history.

Comet ISON is looking promising. On January 17th NASA’s Deep Impact spacecraft (the surviving mother craft of the Deep Impact mission to collide a copper impact probe with comet 9P/Tempel – which it did successfully in 2005) was able to snap a series of images of ISON from a distance of about 493 million miles, as the cometary body approaches about 4.8 Earth orbital radii (astronomical units) from the Sun.
Here is a time lapse movie of these pictures, if you look carefully you’ll see that already there are signs of a glowing tail some 40,000 miles long. It’s possible that ISON will not disappoint.


All comets present a smorgasbord of scientific data. Their tails of particles and dust providing insights to the streaming solar wind and interplanetary magnetic fields, and their contents providing insight to the rich chemistry of our proto-planetary system more than 4 billion years ago.
Oort cloud objects are also intriguing because they may represent material stolen from our stellar siblings. A long-standing problem has been that the number of long-period comets seems rather high compared to our expectations for the population density of an Oort cloud formed from icy material flung outwards during planet formation.
In fact the numbers are amazingly discrepant. While most models of solar system formation suggest there could be some 6 billion icy chunks in the Oort cloud, the comet counts indicate a population of about 400 billion. Quite a conundrum.
In 2010 Hal Levison and colleagues used computer simulations to demonstrate that this apparent over-richness of cometary bodies could be explained if our Sun had emerged from its stellar birth cluster with more than its fair share of these outer pieces. In other words, dynamical pulling and shoving with its sister suns resulted in the acquisition of a vast number of alien cometary bodies.

So not only might ISON be a bright and beautiful creature as it approaches the Sun, it could be truly a visitor from the stars.
About the Author: Caleb Scharf is the director of Columbia University's multidisciplinary Astrobiology Center. He has worked in the fields of observational cosmology, X-ray astronomy, and more recently exoplanetary science. His latest book is 'Gravity's Engines: How Bubble-Blowing Black Holes Rule Galaxies, Stars, and Life in the Cosmos', and he is working on 'The Copernicus Complex' (both from Scientific American / Farrar, Straus and Giroux.) Follow on Twitter @caleb_scharf.