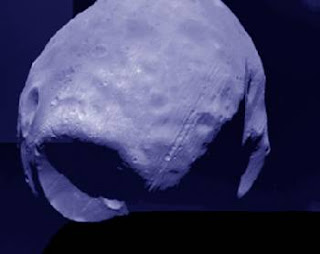 A bit of nonsense in terms of interpretation, yet this cleanly polices up the observational data to a high quality. The original work came out over fifty years ago and has now been thoroughly confirmed. The only thing missing is interpretive imagination.

To that end, the moon conforms nicely to an asteroid moved from the asteroid belt to low Mars orbit through the expedience of ejecting internal mass out through the apparent nozzle at the end. We could do this. The asteroid is now hollow and an ideal location for a spinning space habitat holding a huge potential population. That population would reside in a huge suspension cabled Dyson Sphere with living layers like an onion and could plausibly exceed 100,000,000.

The asteroid would provide the massive shielding needed in space.

As conjectured in earlier posts, the population is likely human and part of the evacuation ahead of the the Pleistocene Nonconformity of 13900 BP. 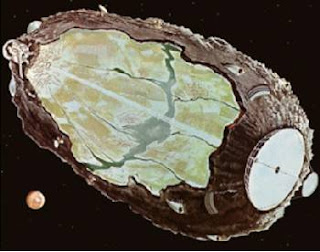 The prestigious European Space Agency (ESA) has declared Phobos, the mysterious Martian moon, to be artificial. At least one-third of it is hollow and its origin is not natural, but alien in nature. The ESA is Europe's counterpart to NASA. Could this revelation motivate NASA to release the secrets it's harboring? Don't count on it…If its artificial an alien civilization put it there. Proven right: Dr. Iosif Samuilovich Shklovsky Phobos first believed artificial by famous astrophysicist Astrophysicist Dr. Iosif Samuilovich Shklovsky first calculated the orbital motion of the Martian satellite Phobos. He came to the inescapable conclusion that the moon is artificial and hollow--basically a titanic spaceship.

After lengthy study of the tidal, gravitic, and magnetic forces, Shklovsky came to the firm conclusion that, “ No natural causes could account for the origins of the two odd moons or their bizarre behavior, particularly that exhibited by Phobos. The moons were artificial. Someone or something built them.

During an interview about the mysterious Martian moon Shklovsky explained: "There's only one way in which the requirements of coherence, constancy of shape of Phobos, and its extremely small average density can be reconciled. We must assume that Phobos is a hollow, empty body, resembling an empty tin can."

For decades most of mainstream science ignored Shklovsky's breakthrough work, until the ESA began to take a closer look at the odd little moon.

The ESA study abstract that appeared in the peer-reviewed Geophysical Research Letters reveals that Phobos is not what many astrophysicists and astronomers believed for generations: a captured asteroid.

"We report independent results from two subgroups of the Mars Express Radio Science (MaRS) team who independently analyzed Mars Express (MEX) radio tracking data for the purpose of determining consistently the gravitational attraction of the moon Phobos on the MEX spacecraft, and hence the mass of Phobos. New values for the gravitational parameter (GM=0.7127 ± 0.0021 x 10-³ km³/s²) and density of Phobos (1876 ± 20 kg/m³) provide meaningful new constraints on the corresponding range of the body's porosity (30% ± 5%), provide a basis for improved interpretation of the internal structure. We conclude that the interior of Phobos likely contains large voids. When applied to various hypotheses bearing on the origin of Phobos, these results are inconsistent with the proposition that Phobos is a captured asteroid."

Casey Kazan writes in ESA: Mars Moon Phobos 'Artificial,' that "…the official ESA Phobos website contained explicit scientific data, from multiple perspectives, which strongly 'supported the idea that this is what radar echoes would look like, coming back from inside 'a huge…geometric… hollow spaceship'. In fact, they were the primary source of the decidedly 'internal, 3-D geometric-looking' radar signature. The concurrence of all three of these independent Mars Express experiments- 'imaging,' 'internal mass distribution,' (tracking) and 'internal radar imaging' now agreed that 'the interior of Phobos' is partially hollow with internal, geometric 'voids' inside it.' Meaning that Phobos is artificial."

In other words, Phobos is not a natural satellite, is not a "captured asteroid," and is hollow. This is exactly what Dr. Shklovsky found back in the 1960s. Phobos was artificially constructed and placed into Martian orbit by...what?

Phobos: what is it?

Data reveals Phobos is not natural. As of now there isn't enough information to discover exactly what the Martian moon is, but there are several intriguing possibilities.

1. It's a gigantic spaceship possibly built as an orbiting station or space observatory.
2. It's a generation starship that arrived from another star system and was placed in parking orbit around Mars.
3. It was being built in Mars orbit for insterstellar travel but was never completed.
A fourth possibility is more ominous and deeply disturbing.
Whatever Phobos actually is its origin and purpose are completely unknown. Thanks to ESA and (Before It's News) |  Facebook page

This story is unfortunately full of clever cherry picked data. I am quite familiar with the ESA Phobos data and this data says ONLY that there are what appear to be large voids in Phobos indicative of the potential that Phobos is NOT artificial but a collection of rubble that is loosely cemented together by the accretion process.
This notion that it is a spaceship is NOT the ESA position! This is an example of taking scientific data and sensationalizing it to fit a previously discussed agenda.
Until such ACTUAL proof arises that Phobos is a hollow structured ship which has NOT been yet presented in any scientific forum based on any scientific data, then Phobos for the moment is a moon of Mars that has a void strewn interior likely due to rubble accretion early on.
-Marc Dantonio
Chief Photo/Video Analyst
MUFON

Loose rubble leaves voids? Assuming Phobos is a captured asteroid, over billions of years its own gravity would tend to shift rubble to fill the voids. Furthermore the tidal forces of Mars which would be many times stronger and would very quickly cause "loose rubble" to crash together and fill the voids.

So either we have a newer asteroid very recently captured by Mars or we have a very anomalous moon of Mars.

Given that both Phobos and Deimos are very anomalous moons, orbiting for example against the grain of all other solar system moons, and we have had many Mars missions that could have been sent closely past on the way to their mission purpose, why haven't we?. Now I remember,didn't we and the Russians try, and something bad happened to these craft every time they got close to these moons??

This question is easily rectified, lets go look minimally using the method described above. With our better instrumentation, we could stay at a "safer" distance now.

Dan Alter
Chief Scientist/Owner
No 1st Cost List, the only possible way to do a Public Scientific Interface for the internet.

I could not say it better. On top of that, the so called crater is way too deep and the energy involved would surely have blown this object apart.

It looks like a perfectly good nozzle to me with maybe an induction coil in the throat.

I will not get started on Venus today.

For what it is worth, i had already determined that the logical way to make a space habitat for humanity was to place it inside a hollowed out asteroid in the form of a spinning ball or wheel for that matter. With that conjecture, i then came across decades old work by the Russians and immediately recognized what it was.

I do not have data on Deimos because i stopped looking when i found Phobos.

And yes, our inability to visit the place is as amusing as our available explanatory. disinformation.

Guys, The article dealing with terraforming Terra in an effort to get rid of the CO2 issue to me is ridiculous . Here, let me explain.
You see, way back in the Carboniferous Age, plants and trees were huge. Typical ferns nowadays are only a foot and a half tall but, back then they were 120 feet tall and trees back then made giant Redwoods look like young seedlings just sprouted and this is because back then the CO2 level was 0.041%.
Today, the percentage of CO2 in our atmosphere is,0.034% In fact, we're slowly loosing our atmosphere's CO2 and when it's gone, the plants and trees will die and soon after they die off we will as well.
CO2 plays a secondary role in warming this planet's atmosphere, Methane is the real heater of our atmosphere and without it Antarctic like temperatures and lower will blanket this planet and will freeze solid any creatures and plants caught outside. This is exactly what happened to the Wooly Mammoths
that were frozen solid in seconds. This happened about 70,000 years B.C. at the start of the last great ice age.
I would recommend that we leave the planet ALONE. The heating up and cooling down processes are normal and are caused by the Sun and this planet's orbit around the Sun. --- JTD ---

I have to say that the likelihood that Phobos is only a fluke amalgam of loosely packed space rubble is very small. It's velocity around Mars is too high for it to be a captured asteroid. It's nearly perfect circular orbit and its almost perfectly synced orbit around Mars' equator is also extremely unlikely for it to be "natural." Additionally, its decaying orbit, coupled with its hollow interior make for a compilation of anomalies that lead to a nearly inescapable conclusion. This information, taken under the totality of additional information that references the existence of (non-human) intelligent life in the universe pushes what we have been inferring for years even further.

What is more astonishing is that there has been no serious press on this whole phenomena. We have effectively a void in actual public speculation and this one is easy to study.

It is negative data but conforms more to a NASA lid. Recall how NASA did not openly question the ice decay projections of the Arctic until I put out at my expense a press release in 2007 arguing the current decay rates indicated open seas as early as 2012, which is what happened. That Ice has not begun to rebuild yet. I am convinced my release forced someone's hand.