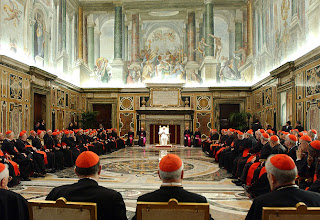 This has the usual list of received truths regarding the problems facing the Catholic Church. The Church is an organization tasked solely with introducing the holy spirit and the teachings of Jesus to all humanity. It is led by trained priests who manage themselves in a traditional way that naturally has its failings. They need to apply the rule of twelve that Jesus did not have time to implement well enough to avoid its been cast aside. Present forms have worked well enough to at least conserve. They have not worked well to readily confront the modern era although in time they will. The modern era has arrived and is arriving almost fully formed.

The objective truth is that the church has been almost completely successful. Modernism is an informed Christian society even if many chose to not espouse religion. That is merely an affectation that will evaporate the instance that revelation is accepted and the scientific basis of it all becomes understood.

The foot dragging of the Islamic world comes from their recognition that their religion has little for women who become empowered by modernism. The Arab spring has now upset that apple cart however much the Islamists attempt to put the wheels back on the authoritarian wagon. It is the women who are revolting and have nothing to lose.

Other drives into conservationism among other indigenous religions are expressions of the same effect. They are losing.

The next thirty years are unique. It is now possible to wash away the historic conflicts, resolve obvious issues and open the Universal Church to an inflow of all humanity under the Christian umbrella. It may even be probable. For two thousand years, the church has proven it is bigger that the people leading it and it is end game.

When Pope Benedict's successor is chosen, the civil war between conservatives and liberals will resume with ferocity

Pope Benedict's resignation has brought about a brief truce in the civil war that rages through the Catholic church worldwide, but hostilities will resume as soon as his successor is chosen. In the US, in France, in Germany, Austria, Australia and, increasingly, in England, the church is split between liberals who believe in democracy (and that they are the majority) and conservatives who believe in autocracy, providing they get to choose the bishops.

The language on both sides is fierce. Liberals compare the Vatican to the KGB; conservatives accuse their opponents of heresy and worse, and call themselves "orthodox" to make the point.

Each side blames the errors of the other for the troubles of the church. So the sex abuse scandal is either due to authoritarian clergy and a corrupt culture of celibacy, or to liberal slackness. The fall in attendance is either due to the refusal of the church to modernise, or to its abandonment of eternal truths.

But what really divides the two sides? The obvious answer is sex, but that is not the only factor and probably not the most important one. Conservatives are implacably opposed to abortion, and in theory at least opposed to contraception too. They reject the notion of women priests and of married priests unless they are former Anglicans who will join them in denouncing liberalism. Many take up strongly anti-environment positions: in Australia Cardinal George Pell is a noted critic of the science of human-induced climate change.

Americans such as George Weigel and the late Michael Novak were ideologues of Reaganism and favour US military and economic expansion but this is not central to the package. There is an older conservative position that favours isolationism and is suspicious of international capitalism. At the rancid fringe this shades into the antisemitism of the schismatic Society of Saint Pius X, home of the Holocaust-denying Bishop Richard Wiliamson.

The liberals mostly buy into the standard progressive package: they want married clergy (around 100,000 men left the priesthood to marry in the 70s and 80s, and their loss has never really been made up); they are in favour of contraception within marriage; and believe that the relief of poverty is a much more pressing and urgent issue than abortion. They believe the church should be more openly tolerant of gay people and that the protection of the environment is a Christian duty.

Most of these are also the uncontroversial attitudes of the laity in the west: polls and statistics show clearly that Catholic sexual behaviour is pretty much the same as that of non-Catholics, and if the Catholic vote inclines in any direction it is to the left. Conservative Catholicism is very much a movement of the elites in the west. Even in the US, the right wing hostility to immigration has cost the Republican party support among socially conservative Hispanic Catholics.

But the priesthood, and especially the bishops, of the Catholic church are vetted for loyalty to the church's sexual teachings. The more the laity reject these, the greater has been the pressure from the Vatican for priests who will support them. By now, after 30 years of this pressure, under Pope John Paul II and later Pope Benedict XVI, there are few bishops and no cardinals who have ever dared express dissent about this.

None of this would threaten the future of the church if it weren't also a struggle about power. The Catholic church is organisationally an absolute monarchy but it has no powers of taxations. Economically it is dependent on the donations of the faithful. That's one reason why the German church, where the government collects a small tax on its behalf, is so important for Catholicism in Europe. Even the celibacy of the clergy can be seen as a primarily economic measure (it's not a doctrinal matter) that ensures the church need never support any clergy families.

In this light, the disaffection of the laity really matters. It becomes a bid for the control of the church they pay for. The most radical element of the liberal programme for the priesthood is not so much an end to clerical celibacy as the desire for national churches to elect their own bishops rather than have them chosen from Rome. This increase in the power of the bishops at the expense of the pope, and of national churches at the expense of the Vatican, was a crucial part of the agenda of the reforming second Vatican council of the 60s. It is also the section that Pope John Paul II and Benedict after him most decisively rejected.

The conservative programme has almost always involved the imposition of bishops from Rome, or a campaign to undermine existing bishops by intriguing directly with the Vatican. That element was particularly apparent in the establishment of the "personal ordinariate" for priests who left the Church of England to escape the ordination of women. This – as documents leaked to the Guardian showed clearly – was co-ordinated behind the backs of the English bishops and against their will. Advertisements asking for money for support have been a regular feature of the Catholic Herald ever since.

Yet it would be a mistake to decide that the conservatives are doomed because they are out of step with modern society. In the 50 years since the Vatican council ended, that has become their strength. The general mockery of Catholics as weird and sexually conflicted tends to make young, committed ones feel their faith is stronger and more important. If Catholicism recedes from the mainstream, it is likely to grow in commitment even as it shrinks. In the end, the liberals might stop paying and they might stop attending church – 10% of American adults are now former Catholics – but they are behind a church that is merely shrinking, not entirely empty

Excellent blog you’ve got here. It’s difficult to find high-quality writing like yours nowadays. I really appreciate individuals like you! Take care!! You can visit my site.
wheel hire