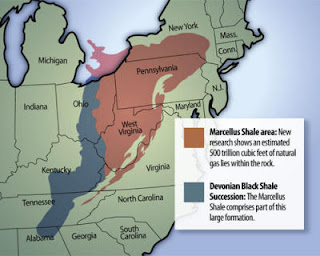 This item is an informed observers bird's eye view of just how significant the fracking revolution really is. We have had enough time now to get a decent handle of the situation. I had concerns on decline rates but that was something that while serious enough it also meant that almost all production is flush production. You get it inside of a few months and you then have a slow drainage system that will keep going for decades as tight resources slowly leak out. It is also amenable to additional stimulation.

So unless the industry is losing gobs of cash doing this, and that is readily fixed with a modest upward adjustment in price, then the reserves are stupendous and behind every foot of natural gas we have ten that may slowly leak out over decades if not centuries and always available for additional work. The sweet thing about gas wells is that they are not maintenance pigs like oil wells.

In fact horizontal fracking has allowed the tight gas industry to return to traditional economic model in which first flush can be counted on to pay off the well itself. Thus we now have assured success and first flush payout which is a sure fire formula for galloping investment in drilling.

So while everyone can see the runaway drilling and the fast decline rate, they forget the bank of earned production and infrastructure behind it carried by the long term production.

You may recall the former name of our premium energy letter, Energy Investor, is The $20 Trillion Report.

Many readers and colleagues asked us about the origin of the name, "The $20 Trillion Report"...

It came from a report by the International Energy Agency (IEA) out of France published many years ago, which stated the world would have to spend $20 trillion to meet future energy needs.
It looks like that figure will be grossly underestimated.

You see, the IEA report was published well before drilling started in the Marcellus in Western Pennsylvania. And in the past five years, reserve estimates for the Marcellus Shale have increased almost every year — and by a massive margin.

First it was figured the United States with production coming online from the Marcellus contained 10 years' worth of natural gas... then 50 years...
Then 100... 200...

Now industry professionals are throwing around terms like "effectively infinite."
One thing is for sure: The Marcellus is a gold mine to America.

And let me state up front my true belief: The Marcellus is a national economic treasure that couldn't have come at a better time.

But it gets better...


When you throw in the Utica Shale that's being explored next door in Ohio, the potential for a natural gas bull market in the U.S. could last several decades, well beyond our lifetimes.
A recent report by the Kroll Bond Rating Agency in New York says the Utica and Marcellus Shale plays in Ohio, Pennsylvania, West Virginia, and New York State are part of a domestic resource that could turn out to be more than $10 trillion in additional economic activity in the U.S., once shale oil and natural gas resources are fully developed.

Think about that for a second.

Of course, that $10 trillion of economic activity will be spread out over many years...
And it's not just Pennsylvania and Ohio that will enjoy the economic benefits from shale drilling.
According to a recent report, "Tech Effect: How Innovation in Oil and Gas Exploration Is Spurring The U.S. Economy":

The surge in U.S. natural gas production has led to the construction of gas-fired power plants and a renaissance in petrochemicals, steel, polymers, glass, and ammonia plants.

The benefits are widespread:

States with extensive shale gas reserves, such as Texas and Pennsylvania, can expect to add up to 236,000 and 145,000 jobs, respectively.

Additional tax revenues and royalty payments in producing states are also significant. Royalties alone are expected to rise by $12 billion by 2017.

Even states without shale gas reserves, such as Florida and New Jersey, can expect employment gains due to lower energy prices, with each state adding up to 59,000 and 36,000 jobs, respectively.

The United States has so much natural gas, it's essentially free.

It's time to back up the truck, whatever that means.

the neat thing is that cars and trucks can run on CNG (compressed natural gas) the infrastructure for distribution is almost there. All that is needed is demand. Tell me again why we are messing around in the Middle East?