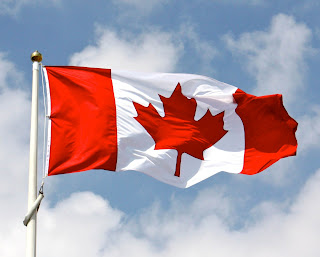 It is natural for Canadians to think that their foreign policy as a minor side show under the shadow and direct leadership of the .  Yet that has never been true. Historically has been able to often do what the could not and be well ahead of on many important decisions.

I expect current Canadian policy toward as decisive and important and it turns out even timely.  The newly emergent Arab political consensus must reach a satisfactory settlement with and all others are either self excluded or tainted as is the .

The next three years will see oil pipelines to the East Coast and the West Coast established on a priority basis however quickly the Keystone pipeline is approved.  This will allow to secure markets in and the Eastern Seaboard.

dumped gold as a reserve a long time ago for good reason.  We produce ample gold to start with and in fact present pricing is now generating acceleration in gold production.  At the same time a revolution in underground mining technology is upon us and a huge number of deposits will come on line.  Even production is hugely Canadian owned or was at least.

Gold is a commodity that satisfies human hoarding instincts.  It is now been produced on a scale never contemplated because of this.

Otherwise, our policy toward emerging nations is typically targeted and surprise, surprise is also actively reviewed.  We no longer are prepared to send hand outs to assuage a false sense of guilt or some such argument.  Obviously some do not like this.

In May, I will be publishing a book about the history of the strategic policies that guided the from its colonial status prior to the Seven Years’ War (1756-1763) to the achievement of absolute global paramountcy after the fall of the Wall. (The fact that the subsequent years have been less successful takes nothing from the astonishing and almost uninterrupted rise of that country prior to the collapse of the U.S.S.R.)

This has put me in a receptive mood for the Canadian defence and public policy think-tanks that occasionally ask me for my opinion about ’s stance in contemporary international relations. In general, I think the Harper government has been commendably hard-headed on a variety of fronts but perhaps overly cautious on others.

On climate change, for instance, the Harper government has been cautious about hurling itself into the deep end of carbon taxes and the like (in contrast to former Liberal leader Stéphane Dion, who came close to infringing animal-cruelty laws by naming the family dog “Kyoto,” after the farcical accord agreed to in that Japanese city). Most Canadians support Mr. Harper’s approach, but his lack of environmental bona fides is a constant subject of attack by liberal media and activists.

The same can be said of the Harper government’s policy regarding the . Non-governmental opinion, and apparently that of many officials within the Foreign Relations and National Defence departments also, seems to oppose the government’s pro-Israeli policy, and to purport to believe that has lost influence in the Arab world. But it is a complete chimera that Canada ever had any influence in the Arab world, and only the occasional tourist buying carpets in the soukh is all the proverbial Arab street would know of Canada.

has acquired some influence with . But more importantly, Stephen Harper and Foreign Minister John Baird have taken a position that is moral and courageous. The fact is that should not negotiate with anyone who does not accept the right of to exist as a Jewish state. All those who claim to favour the return to Israel of sufficient numbers of allegedly displaced Palestinians and their descendants to swamp the Jewish population of Israel are just as much, if more subtly, advocating the extermination of the state of Israel as those who wish to obliterate it militarily.

was legitimately constituted as a Jewish state by the United Nations in 1948, and was prepared to live within the borders it was then given. The Arab powers went to war in 1948 to strangle the nascent Jewish state, just three years after the liberation of the Nazi death camps that murdered half of the world’s Jewish population (six million Jews, as well as six million non-Jews). The same powers went back to war in 1967 to crush Israel, and lost again, yet now claim an absolute right to return to the 1967 borders, and to object to the construction of settlements anywhere in the West Bank territories that Israel occupied in that war. This construction is the only pressure can assert to persuade even the Palestinians to accept the legitimacy of as a Jewish state, albeit with borders still to be determined.

As Israel has demonstrated in Gaza and Sinai that it will uproot settlers to achieve a durable peace, those who rankle at Canada’s policy should reconsider their fantasy that Canada would have any influence with the Arabs if it aligned its position against Israel. It would merely be joining the ranks of witless dupes in Europe and who echo or acquiesce in the anti-Semitic blood libels of the United Nations. As I have written here and elsewhere before, the Palestinians are entitled to a viable state (to which they may return), but not to a blank cheque from the world to violate every agreement they make with as they have . The Harper-Baird foreign policy correctly reflects this.

There also seem to be reservations in politically fashionable circles about the comparative recent de-emphasis in Canadian aid to Africa in favour of aid to . But surely official policy is correct. Latin America has made much swifter and more uniform progress than Africa in recent years, and is in our hemisphere where we can make common cause much more easily and plausibly than with the polyglot Babel of 53 African states.

Most of Latin America has even reached the level of political maturity of being able to preserve democracy after electing a leftist government (as in , and possibly even and even ). As a member of the Organization of American States, Canada can work with the sensible Latin American countries and provide a salubrious influence independently of the historically uneven positions taken by the United States in a region that it essentially considered an American suzerainty under the Monroe Doctrine from the 1820s until recently.

If ’s leaders will not seriously attack demand for drugs in their own country, they shouldn’t expect neighbours to fight the ‘drug war’ for them

There does seem to be a slowly bubbling consensus in official and foreign policy establishment circles to propose reform of international institutions, especially NATO and the United Nations. Canada, as I have noted before, is well-qualified to do this.

There is also some enthusiasm for another complete review of foreign, defence and trade policy in . Such a review should result in a defence policy that was less dependent on passive confidence that the national interest would require that country to include under its defence umbrella as if it were part of the . Such a policy has not been entirely reliable since the end of the Cold War, as the two countries, though natural allies, do not have identical interests.

We should join a continental missile defence system, but we should also encourage the Latin Americans not to reduce themselves to Civil War in support of the insane American “war on drugs” (which the has lost). If the United States will not seriously attack demand for drugs in its own middle and upper classes, as opposed to just trolling through poor African-American districts and imprisoning a half-million of their inhabitants each year, and will not use the world’s greatest national military forces to assure their own borders in adequate numbers to avoid stifling legitimate commerce and tourism, it should not expect its neighbours to do it for them.

Canada should explore defence consortia with foreign groups, especially in regard to the acquisition of war planes; and if we stick with the F-35 fighter, we should ensure that we derive benefit from its production. There is no economic stimulus as effective and benign as national defence, nor any adult education program as effective as the Armed Forces.

Canada will raise its influence in the world and its national self-confidence with a larger and more capable military, including some naval vessels that show the flag proudly. (We could show a little more panache with uniforms also.)

There are two other areas that need immediate attention.

In energy, we must complete the oil pipeline to the Eastern provinces at once. It is insanity for the eastern half of our petroleum-rich country to import oil at a cost substantially above what we receive for much of our own Western oil exports.

And the Bank of Canada should stop accumulating U.S. dollars (which as a matter of American policy are being steadily devalued), and should aggressively stockpile gold, which is certain to increase in value over time and of which our current reserves, in a gold-producing country, are 84th in the world, on a par with Mozambique and Sri Lanka, and only 1/13th of our U.S. dollar reserves.

Successive governors of the Bank of prior to Mark Carney sold hundreds of tons of gold at prices that were clearly disadvantageous. This too is insanity, and insanity rarely is effective as national strategic policy.

It is not a flattering comment on Parliament and the media that the public policy debate on some of these issues has not been more enlightening.