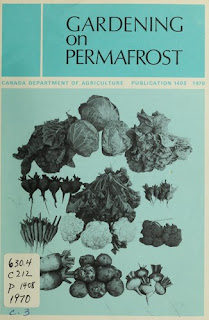 Once again, the received truth is that agriculture in permafrost country is an impossibility.  I do not generally agree.  It is clearly impossible to grow trees beyond a certain set of conditions, but much of their northern range is in fact underlain with permafrost.   So it is not so impossible as a species variant.

Yet we do know that the short growing season is capriciously rich for the few weeks that it lasts.  It is a mistake to discount it at all.

The problem for agriculture is to establish a secure seedbed as ever.  Modern equipment makes this much more practical.

What I would attempt is to use a blade to scrape the top soil aside from the underlying frozen subsoil to produce windrows on either side of the exposed surface.  I would create these bands say thirty to forty feet wide while producing a windrow just as wide.  In this manner half of the total field is exposed.  I would then let it winter over and allow the summer to thaw out the exposed ground down several inches.  I would then scrap that material onto the windrow to loosen it up and then push the entire windrow out onto the exposed ground to produce a thick bank of mixed soil and muck.  While at it I would scrape down the newly exposed soils to open up the remaining area.

In this way it should be possible to produce a deep bed of loose soil able to insulate the surface.  Repeating this process every year will keep the permafrost out of the soils while adding to the soil bed as needed.

This soil bed will warm easily enough and allow potatoes to be grown along with a full range of short season crops. This is a modified form of bank and ditch agriculture that leaves the ditches dry and drained.  I do think though that the banks need to be torn down if not every season, certainly every second season because the permafrost will wick it way up into the surface soils.

Yet it may also turn out that flooding with a few inches of river water at the height of summer can cure that and protect the late crops from frost.  Then when the frost sets in and the crop is harvested one merely drains the fields.  And since we are flooding those broad ditches, we may as well plant a crop of cattails for winter fodder at least.  All this of course provides a natural compost stream to steadily upgrade the fields.