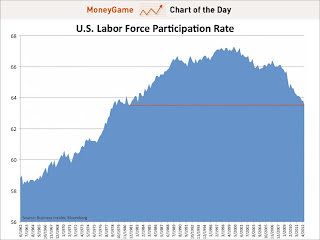 What this tells you is that the real economy has contracted by about three percent since 2007. Everything else is window dressing to disguise this fact. As I posted in the past, we are repairing the credit collapse the hard way. It is also the slow way.

The good news is that the banking system now knows what they have to work with and they have begun to lend again and this will begin to stimulate demand to allow a recovery to get under way. I think we are now into a three year cycle of slow steady recovery.

I have also posted before that it did not need to be way but nothing approaching economic competence appear possible in Washington. Worse, the looting culture of Wall Street remains intact and will strike again in eight years unless real reform is put in place.

I think that the contraction itself is complete although governments everywhere are printing to support welfare payments. These statistics tells us that there are somewhere close to 20,000,000 workers out there wanting to participate in the economy and another 40,000,000 looking for a much better position. Capitalizing them and their jobs would readily support a plus five percent growth rate for five to ten years. Sadly it does not appear to be happening.

Perhaps it is time for Canada and the USA to do a joint Great Lakes Redevelopment Scheme similar to the TVA of times past.

First of all, let's take a look at the percentage of the civilian labor force that has been employed over the past several years. These numbers come directly from the Bureau of Labor Statistics.  As you can see, this is a number that has been steadily falling since 2006...

In January, only 57.9 percent of the civilian labor force was employed.

Do the numbers above represent a positive trend or a negative trend?

Even a 2nd grader could answer that question.

So how in the world can the Obama administration and the mainstream media claim that the employment picture is getting better and that we are in a "recovery"?

But most Americans believe what they are told. It is almost as if we are in some kind of a "matrix" where reality is defined by the corporate-controlled propaganda that is relentlessly pumped into our brains.

The only way that the government has been able to show a declining unemployment rate is by dumping massive numbers of Americans into the "not in the labor force" category.

Just check out how the number of Americans "not in the labor force" has absolutely skyrocketed in recent years...

In January, there were supposedly 89,868,000 Americans that were at least 16 years of age that were not in the labor force.

That number has risen by more than 8 million since Barack Obama first entered the White House, and that is highly unusual, because the number of Americans "not in the labor force" only increased by2,518,000 during the entire decade of the 1980s.

You sure can get the numbers to look more "favorable" if you pretend that millions upon millions of American workers simply "don't want a job" any longer. The truth is that if the labor force participation rate was at the same level it was at when Barack Obama was first elected, the official unemployment rate would be well above 10 percent.

But that wouldn't do at all, would it? 7.9 percent sounds so much nicer.

And of course even if you do have a job that does not mean that you are doing okay.

To me, that is a mind blowing statistic. It would be incredibly challenging for anyone to live on $20,000 a year, much less try to support a family.

If you live in Washington D.C. or New York City and you have a "good job" working for the establishment, you may not realize it, but there are tens of millions of American families that are really hurting out there. According to the U.S. Census Bureau, more than 146 million Americans are either "poor" or "low income" at this point, and most of those people actually do have jobs.

For much more on the "working poor" in the United States, please see my previous article entitled "35 Statistics About The Working Poor In America That Will Blow Your Mind".

In a previous article, I noted that during Obama's first term, the number of Americans on food stamps increased by an average of about 11,000 per day.

How bad do things have to get before people realize that we are living through a nightmare?

Sadly, most Americans still have faith in the system.

Most Americans are still convinced that our politicians will somehow find a way to turn things around.

Most Americans will gather around their television sets this weekend and watch the Super Bowl and laugh at all the funny commercials without even thinking about how America is literally falling apart all around them.

But there is one group of Americans that is acutely aware of how bad things have really gotten.  Small businesses have traditionally been the primary engine of job growth in this country, but right now small business owners all over the nation are facing a tremendous crisis.

Millions of small businesses are on the verge of extinction, and yet our politicians just continue to pile on more taxes, more rules and more regulations.

According to economist Tim Kane, the following is how the decline in the number of startup jobs per one thousand Americans breaks down by presidential administration...

Is that a good trend or a bad trend?

All of this is so simple that even the family pet should be able to figure it out, and yet most Americans seem oblivious to all of this.  They just keep gobbling up the mainstream media propaganda and they just continue to go out and wildly spend money.

It is almost as if we didn't learn any lessons from 2008.

And guess what? The infamous "no money down mortgages" are back. If we wait long enough, perhaps "interest only mortgages" will make a comeback as well.

Unfortunately, I am afraid that time is running out. we have been living in the biggest debt bubble in the history of the world, and it is only a matter of time until it bursts.

2008 was just a "hiccup" compared to what is coming.  Our politicians and the Federal Reserve were able to keep the house of cards from completely crashing down back then, but they are not going to be able to avert the economic horror show that is rapidly approaching.

I hope that you are getting prepared. Back in 2008, millions of Americans suddenly lost their jobs, and because many of them did not have any savings, many of them suddenly lost their homes. One of the most important things that you can do to prepare for the coming crisis is to build up an emergency fund. If things suddenly go bad, you don't want to lose your house and everything that you have always worked for.

In addition, anything that you can do to become more self-sufficient and more independent of the system is a good thing, because the system is failing. The years ahead are going to be much more chaotic than what we are experiencing right now, and when the next crisis strikes you will be very thankful for the time and the energy that you put into preparing.

So what are all of you seeing in your own areas?

Are businesses shutting down?

Are people having a hard time finding good jobs?

What has to be understood is that savings, debt and the national accounts involving trade do not exist in a vacuum, they are inter related. Baby boomers are terrified by the repeated threats against Social Security, thus they save frantically. (Note, there is no person now reaching the age of 65 who can retire at full SS benefits. The rules for persons now reaching that age state 66 for full benefits, soon to be 67.) In the search for cheaper goods, big box department stores scour the earth for cheap junk to fill their stores, thus we have a negative balance of trade amounting to some 50 billion dollars or more each month. Money has to be created to fund both of these, and (shock) government has been creating money at a rate equal to total savings plus trade deficits. To balance the budget means the return of manufacturing to the US, or the collapse of the US economy to the point where we cannot afford to buy Chinese made printed tshirts. This is simply fact, based on well understood identities of national accounting.