So God Made a Farmer 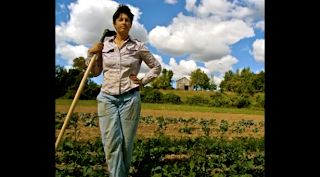 The present regime was made possible by two things. The cost of capital and the cost of market access.

This led directly to the present distortion of industrial agriculture as presently constituted. Worse though is that the excess capital allows this industry to buy regulation to preserve bad practice as long as possible and to subsidize it.

The internet has reshaped the market access problem into the individuals favor. The most successful farm model today is a small vertically integrated producer that delivers a quality product to the customer. Production technology is also easily downsized to support this market and one of the largest markets are exactly were those manufacturers are.

The fight to alter regulation has only begun, but the set backs the meat industry has faced shows us that the need it there and also the political support from future customers.

In the past the consumer went to the farmer's gate looking for a simple bargain and accepted the cost of processing. The farmer will soon be better able to do just that to add the margins for his labor. He is also naturally more efficient. After all foods not up to shipping standards are still perfectly fine food and immediate processing means it is produced fresh which is not as likely after it leaves the farm gate.

My own model that I am developing for land based communities solves the capital problem and transitions our agriculture into the new age.

The Real "Farmer" Story: So God Made High-Fructose Corn Syrup

Of the commercials that debuted at this year’s Super Bowl, one of the most talked about has been “Farmer,” a Dodge truck ad that pays tribute to the salt-of-the-earth middle Americans who work the land. (Check it out here if you haven’t seen it yet.)

As a Midwesterner who comes from a family just one generation removed from the farm (both of my parents grew up on family farms that have since been lost), some of the heartland pandering in the video worked on me. At the same time, the main feeling I had while watching was that the ad celebrated a type of farming that corporate agribusiness has all but obliterated in the past fifty years.

The satirists at Funny or Die apparently had the same idea. The other day, they released a sly parody video called “God Made a Factory Farmer”:

As others have noted, the content of the new Dodge ad does not reflect the current state of American farming at all. For one, the imagery is a whitewash; basically all the farmers shown in the commercial are white, while the majority of actual farm workers in the United States today are Latino.

The narration, too, is the product of a bygone age. The speech featured in the ad was given by radio personality Paul Harvey to a convention of the Future Farmers of America in 1978. Even then, Harvey did not claim authorship; the original “So God Made a Farmer” text dates back to at least the 1940s.

In an article at the Atlantic, Garance Franke-Ruta pointed to Harvey’s long-standing conservative politics, as described in his New York Times obituary:

In his heyday, which lasted from the 1950s through the 1990s, Mr. Harvey’s twice-daily soapbox-on-the-air was one of the most popular programs on radio. Audiences of as many as 22 million people tuned in on 1,300 stations to a voice that had been an American institution for as long as most of them could remember.

Like Walter Winchell and Gabriel Heatter before him, he personalized the radio news with his right-wing opinions, but laced them with his own trademarks: a hypnotic timbre, extended pauses for effect, heart-warming tales of average Americans and folksy observations that evoked the heartland, family values and the old-fashioned plain talk one heard around the dinner table on Sunday….

He railed against welfare cheats and defended the death penalty. He worried about the national debt, big government, bureaucrats who lacked common sense, permissive parents, leftist radicals and America succumbing to moral decay.

Of course, in the end, it was not godless California hippies who undermined the family farm and gave us a diet of high-fructose corn syrup. And if you’re looking to condemn welfare scams and big-government boondoggles, you need search no further than the subsidy regime that undergirds the profits of modern corporate agribusiness. Sadly, like members of my own extended family, many people who grew up on the farm, fed on the gospel of hard work and rugged individualism, experienced misery in trying to carry on the family tradition. As sustainable farming advocate Tim Wightman writes in his critique of the Dodge ad:

I fell for the hype of serving a corporate food system with duty, honor and 100 hour weeks and very nearly ruined my health in doing so. I am now reminded of all the John Henrys I have known over the years, desperately trying to stay ahead of the system. I am reminded of the migrant workers who’s names we will never know still working the 100 hour standard. I am reminded of all the farm sons and daughters who are not on the land. God may have made a farmer, but Big Ag broke his back[.]

Could the type of land stewardship celebrated in “So God Made a Farmer” be revived, protected, and made sustainable? Perhaps. But to do so would challenge some of the most cherished values of the market. As the great farmer-poet Wendell Berry explained in a Dissent interview with Sarah Leonard:

To have good farming or good land use of any kind, you have got to have limits. Capitalism doesn’t acknowledge limits. That is why we have supposedly limitless economic growth in a finite world. Good agriculture is formal. You can have limits without form, but you can’t have form without limits. If you look around the country and find small farmers who have prospered in hard times, you’ll probably find that they’ve prospered because they’ve accepted their limits….

There’s a fundamental incompatibility between industrial capitalism and both the ecological and the social principles of good agriculture. The aim of industrialization has always been to replace people with machines or other technology, to make the cost of production as low as possible, to sell the product as high as possible, and to move the wealth into fewer and fewer hands….

In the middle of the last century, Aldo Leopold was writing and publishing on the “land community” and ecological land husbandry. Sir Albert Howard and J. Russell Smith had written of natural principles as the necessary basis of agriculture. This was work that was scientifically reputable. At the end of the Second World War, ignoring that work, the politicians, the agricultural bureaucracies, the colleges of agriculture, and the agri-business corporations went all-out to industrialize agriculture and to get first the people and then the animals off the land and into the factories. This was a mistake, involving colossal offenses against both land and people. The costs have not been fully reckoned, let alone fully paid.

I’d say that’s a story that deserves the widest possible audience. Unfortunately, something tells me it won’t be featured in a Super Bowl ad anytime soon.