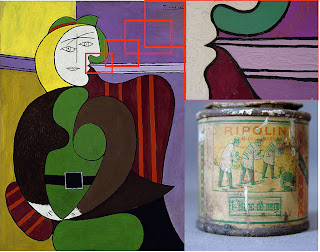 It let him get the look he wanted and it was the age of high quality house paints.  Thus it is no particular surprise. This merely improves analytic precision should we care.

Yet it allowed him to create a vastly more expansive style that shed the attention to the traditional stroke by stroke methodology of the past and approaches the styles of today were it is all computer assisted.    He truly led the way and was recognized for it.

It made great art.

Pablo Picasso, famous for pushing the boundaries of art with cubism, also broke with convention when it came to paint, new research shows. X-ray analysis of some of the painter's masterworks solves a long-standing mystery about the type of paint the artist used on his canvases, revealing it to be basic house paint.

Art scholars had long suspected Picasso was one of the first master artists to employ house paint, rather than traditional artists' paint, to achieve a glossy style that hid brush marks. There was no absolute confirmation of this, however, until now.

Physicists at Argonne National Laboratory in , , trained their hard X-ray nanoprobe at Picasso's painting "The Red Armchair," completed in 1931, which they borrowed from the Art Institute of . The nanoprobe instrument can "see" details down to the level of individual pigment particles, revealing the arrangement of particular chemical elements in the paint.

The analysis showed that Picasso used enamel paint that matches the precise chemical composition of the first brand of commercial house paint, called Ripolin. The researchers were able to compare the painting's pigment with those of paints available at the time by analyzing decades-old paint samples bought on eBay.

What's more, the detailed study, which used X-rays to probe the painting's pigment down to the scale of 30 nanometers (a sheet of copier paper is 100,000 nanometers thick), was able to pinpoint the manufacturing region where the paint was made by studying its particular impurities.

"The nanoprobe at the [Advanced Photon Source X-ray facility and the Center for Nanoscale Materials] allowed unprecedented visualization of information about chemical composition within a singe grain of paint pigment, significantly reducing doubt that Picasso used common house paint in some of his most famous works," one of the research leaders, Argonne's Volker Rose, said in a statement.

Art scholars think Picasso experimented with Ripolin to achieve a different effect than would've been possible with traditional oil paints, which dry slowly and can be heavily blended. In contrast, house paint dries quickly and leaves effects like marbling, muted edges, and even drips of paint. Still, experts couldn't be sure house paint was the key to Picasso's look without proof.

"Appearances can deceive, so this is where art can benefit from scientific research," said Francesca Casadio, senior conservator scientist at the Art Institute of . "We needed to reverse-engineer the paint so that we could figure out if there was a fingerprint that we could then go look for in the pictures around the world that are suspected to be painted with Ripolin, the first commercial brand of house paint."

The scientists detailed their findings in a paper published last month in the journal Applied Physics A: Materials Science & Processing.