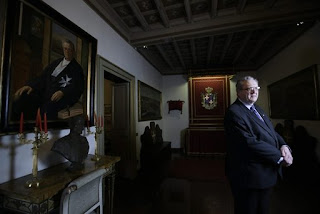 This is a delightful echo of history but also a sound idea that needs to be honored and seriously considered. It is obvious in the modern world that an invitation to actually join this order or any such like order is an invitation to conduct philanthropy. Yet it is also true that philanthropy is almost a recently popular idea amount the newly enriched of the present world.

And bye the bye, there is no surer way to gain status with money than to be able to give it away. Hiding it in off shore bank accounts does not cut it.

Prince and Grand Master of the Knights of Malta — bounds into the sitting room of his magnificent Renaissance palazzo sweaty and somewhat disheveled, and asks an aide if he should take off his sweater to be photographed.

Garrulous and self-effacing, Festing embodies some of the paradoxes of a fabled Catholic religious order that dates from the medieval Crusades: Steeped in European nobility and mystique, the order's mission is humility and charity — running hospitals, ambulance services and old folks' homes around the globe. It has many trappings of a country, printing its own stamps, coins, license plates and passports, and yet — a stateless state — it rules over no territory.

The Sovereign Military Order of Malta's world headquarters, down the block from the Spanish Steps and with an Hermes boutique on the corner, features reception rooms draped in oil portraits of grand masters past and a gem of a chapel where King Juan Carlos of Spain was baptized by the future Pope Pius XII. On the ground floor, it runs a health clinic that, while private, provides free services for anyone who can't pay.

"It is, I suppose, a series of contradictions," Festing told The Associated Press ahead of the order's 900th birthday this week. "I'm on the inside of it, so it doesn't seem to be contradictory to me, but maybe it is."

And as the Sovereign Military and Hospitaller Order of St. John of Jerusalem of Rhodes and of Malta, as the group is officially called, celebrates the anniversary on Feb. 9 with a procession through St. Peter's Square, a Mass in the basilica and an audience with Pope Benedict XVI, the ancient order is confronting some very modern-day issues.

Once drawn exclusively from Europe's nobility, the order is trying to shed its image as a purely rich man's club while still tapping the world's wealthy to fund its charitable work. And though its military past is well behind it, the order is waging real legal battles to fend off what it says are impostors seeking to piggyback on its name to con people out of money.

Festing, a 63-year-old Briton and former Sotheby's auctioneer, is expansive about the unusual attributes of his organization of 13,500 Knights and Dames who make promises to be good Christians and fund the order's humanitarian work.

The order traces its history to the 11th century with the establishment of an infirmary in Jerusalem that cared for people of all faiths making pilgrimages to the Holy Land. It is the last of the great lay chivalrous military orders like the Knights Templars that combined religious fervour with fierce military might to protect and expand Christendom from Islam's advance during the Crusades.

In February 1113, Pope Paschal II issued a papal bull recognizing the order as independent from bishops or secular authorities. That "birth certificate," as Festing calls it, is the legal basis for asserting the order's sovereignty and the reason for Saturday's anniversary celebrations at the Vatican.
Festing himself is a "Professed Knight" — the highest rank of members who take vows of poverty, chastity and obedience. The poverty vow seems a bit relative in this context: Knights on the order's governing council have their own private apartments inside the palace, complete with a valet and driver for cars that carry either diplomatic plates or the order's own SMOM plates. Wine from the order's own vineyards is often served.

Festing, whose family traces their ancestry to 14th- and 16th-century knights, was elected grand master in 2008. It's a title he holds for life and is equivalent to the rank of cardinal, though he can't vote in a conclave to elect a pope.

Currently there are about 60 professed knights and Festing hopes to increase their numbers as he seeks to expand the rank-and-file base to a younger generation of equally Catholic but not necessarily noble classes around the globe.

"It's not exactly out of date, but you can't maintain that in the 21st century," he says. "In general terms, in the old countries of Europe, we maintain the nobiliary requirement to an extent. But only to an extent. But in places like Australia, Central America, North America, Southeast Asia, it's all done on a different basis."

Members are still expected to chip in when natural disasters strike or wars erupt. Contributions in the tens of thousands of dollars are not unusual. Members also volunteer, bringing the sick to the shrine at Lourdes or pitching in at a one of the order's clinics, like the maternity hospital it runs in Bethlehem just a few steps from Jesus' traditional birthplace, where most of the patients are Muslim.

Even though it's a Catholic aid group — whose origins date from the Crusades — the order works in several Muslim countries, including Pakistan and Syria. "We do not hide that we are Christian, but we do not proselytize. That is impossible," said the order's health minister, Albrecht von Boeselager.

One perk of membership in the top ranks, reserved for men only, is the fabulous uniform: bright-red military-style jacket, with sword, spurs and epaulettes for official duties, a dark cloak with a white, eight-pointed Maltese Cross on the front for religious services.

"We certainly don't want to be, and in fact we're not a sort of rich man's club," Festing insists. "To a sort of an extent you could say, 'Well maybe they are, slightly.' But that's not the basis of it. Otherwise I wouldn't have gotten in."

That elite reputation, however, combined with the order's neutral and apolitical relief work, has earned it a level of prestige that few organizations can match. Governments, the European Union and U.N. agencies finance the order's humanitarian operations; it has observer status at the United Nations and diplomatic relations with 104 countries — many in the developing world where such ties can help smooth the delivery of aid.

But the prestige has come with a price: Copycat orders have sprung up claiming to be the Knights of Malta or an offshoot that may or may not legitimately trace its origins to the group. These "false orders" prey on people eager to contribute to a Catholic charity thinking it's sanctioned by the Holy See.

The con jobs are sometimes so good that even the Vatican has been fooled. In October, the Vatican issued a public reminder that it recognizes only two ancient equestrian orders — the Order of Malta and the Equestrian Order of the Holy See Sepulcher of Jerusalem — after a group purporting to be the knights obtained approval to host a ceremony within the Vatican walls, Festing said.

"It was entirely innocent," on the part of the Vatican, said Festing. "But it wasn't actually us. It was somebody else."