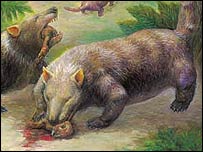 The rapid expansion of DNA testing capability and general efficiency is now so mature that we are actually mopping up some of the big obvious tasks. I have no doubt that this will soon be expanded to birds in particular and all land animals out there.

We continue to confirm that the mammal did not become a factor at all until post K-T. I am not so sure that that will hold up simply because egg eating works so well for rats in particular. That and insect eating and we can anticipate a very successful mammal and many small successful reptiles who are out there.

What the K-T provided was a newly reborn biome with ample scope for larger creatures which was then filled fastest by the mammals in competition with the birds who also went to giantism.

Now the task of sorting out and correcting our morphological data is well begun also.

This is an artist's rendering of the hypothetical placental ancestor, a small insect-eating animal. The research team reconstructed the anatomy of the animal by mapping traits onto the evolutionary tree most strongly supported by the combined phenomic and genomic data and comparing the features in placental mammals with those seen in their closest relatives. Credit: Carl Buell.


A groundbreaking six-year research collaboration has produced the most complete picture yet of the evolution of placental mammals, the group that includes humans.

Placental mammals are the largest branch of the mammalian family tree, with more than 5,100 living species. Researchers from Carnegie Museum of Natural History are among the team of 23 that took part in this extensive interdisciplinary effort that utilizes molecular (DNA) and morphological (anatomy) data on an extraordinary scale.

By combining these two types of data scientists reconstructed, to an unprecedented level of detail, the family tree of placental mammals. This study explored thousands of characteristics of the anatomy of both living and extinct placental mammals.

This new project produced a more complete picture of mammalian history and provides a huge dataset that will become the starting point of research for a number of scientific questions, including those of vital importance today: how mammals may have survived climate change in the past and what may that mean for our future. The paper appears today in the journal Science.

The collaboration is part of the Assembling the Tree of Life (ATOL) project funded by the National Science Foundation.

"In the field of mammal research, there had been a big divide between people working with DNA and others working on morphology," explains John Wible, PhD, Curator of Mammals at Carnegie Museum of Natural History and co-author on the paper. "They just weren't working with each other until now."
The molecular team collected DNA sequences of living animals and the morphology team examined the anatomy of both living and extinct mammals. The molecular team only sampled living mammals, because genetic material can't be extracted from fossils older than 30,000 years,. Thus, to include fossils, morphological information was essential. Researchers in morphology deal with individual physical features, from bone length to types of teeth to the presence of stripes in the fur; each one of these features is termed a 'character.' By collecting as many characters as possible and comparing their variation among dozens of specimens, relationships between species can be tested and broader patterns emerge.

The ATOL project became a morphological powerhouse. Generally, a group of 500 characters is considered to be a large dataset. The morphology researchers on the ATOL project generated an unprecedented 4,500 characters. Once both DNA and morphological datasets were produced, the resulting combined matrix provided an unprecedented amount of information for each of the 83 mammals included in the study.

"It's not that we hadn't combined morphology with DNA before." clarifies co-author Michelle Spaulding, PhD, the Rea Post-doctoral Fellow at Carnegie Museum of Natural History. "This time, we ratcheted up the amount of morphological detail phenomenally, providing a larger anatomical base for the study as compared with DNA than is typical.."

With the new Tree of Life matrix, researchers now have greater context for the fragmentary fossils they have in hand-often scant evidence such as a few teeth or a skull fragment-potentially shedding light on little-known species that have yet to find a solid home in the evolutionary tree.

Thanks to the incredible amount of anatomical information collected, the researchers were able to predict the appearance of the most recent common ancestor of all placental mammals. Explains Spaulding, "We have all these placentals alive today, from elephants to shrews, from things that fly to things that swim. What could the common ancestor of these things that are so different possibly look like?"

"That's the power of 4,500 characters," says Wible. "We looked at all aspects of mammalian anatomy, from the skull and skeleton, to the teeth, to internal organs, to muscles, and even fur patterns. Using the new family tree of mammals in tandem with this anatomical data, we were able to reconstruct what this common placental ancestor may have looked like."

The scientists were able to work with an artist to approximate the appearance of this ancestor. While only hypothetical, the illustrated concept for this ancestor-from body size to fur type to number of teeth-could not have been achieved prior to the Herculean task of developing the matrix.

"We focused our study on the time around the Cretaceous-Tertiary (KT) boundary, 65 million years ago," states Spaulding, "Molecular and morphological based studies differ on the age when placentals first appeared. Molecular studies place the origin in the mid-Cretaceous, when dinosaurs still dominated. On the other hand, morphological studies have routinely found no evidence of any placental fossils in this time period, and instead place the placental origin after the mass extinction at the close of the Cretaceous that ended dinosaur dominance."

One major goal of this project was to address this controversy and results found that placental mammals appeared after the KT boundary, implying that the mass extinction was a critical event in mammalian evolutionary history.

The study was conducted utilizing the web application Morphobank (www.morphobank.org). The matrix is freely available online and provides a road map to the Tree of Life team's findings by precisely outlining how the team defined each of the more than 4,500 characters in the dataset. Proving that a picture is worth a thousand words, the majority of characters include illustrations.
As revolutionary as the study, the website also marks a new era in how collaborative research may proceed. "We couldn't have accomplished this without Morphobank," lauds Spaulding. "This website allowed members of the team, spread all over the globe, to work simultaneously."