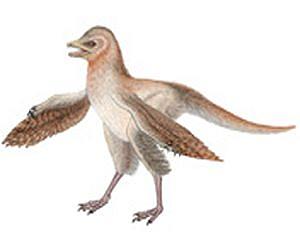 What we are learning is that feathers were an early and likely necessary adaptation for land animals operating away from the water side during day time. We have exceptions but they are not nearly as successful. The Komodo Dragon is not going to invade the Great plains anytime soon.

We have gone from doubting their existence to finding them everywhere. We have also discovered that the descendants of the dinosaurs are around us in plain sight. It is time to quit attempting to sustain our present paradigms and rethink them on the basis of a very early emergence of feathering.


The discovery of a new bird-like dinosaur from the Jurassic period challenges widely accepted theories on the origin of flight.

Co-authored by Dr Gareth Dyke, Senior Lecturer in Vertebrate Palaeontology at the University of Southampton, the paper describes a new feathered dinosaur about 30 cm in length which pre-dates bird-like dinosaurs that birds were long thought to have evolved from.

Over many years, it has become accepted among palaeontologists that birds evolved from a group of dinosaurs called theropods from the Early Cretaceous period of Earth's history, around 120-130 million years ago. Recent discoveries of feathered dinosaurs from the older Middle-Late Jurassic period have reinforced this theory.

The new 'bird-dinosaur' Eosinopteryx described in Nature Communications this week provides additional evidence to this effect.

"This discovery sheds further doubt on the theory that the famous fossil Archaeopteryx - or "first bird" as it is sometimes referred to - was pivotal in the evolution of modern birds," says Dr Dyke, who is based at the National Oceanography Centre, Southampton.

"Our findings suggest that the origin of flight was much more complex than previously thought."

The fossilised remains found in north-eastern China indicate that, while feathered, this was a flightless dinosaur, because of its small wingspan and a bone structure that would have restricted its ability to flap its wings.

The dinosaur also had toes suited to walking along the ground and fewer feathers on its tail and lower legs, which would have made it easier to run.

Dr Gareth Dyke is also Programme Leader for a new one-year MRes in Vertebrate Palaeontology, which offers potential students the chance to study the evolution and anatomy of vertebrates, in order to inform and increase our understanding of the workings of modern day creatures.