Hypertrophic Cardiomyopathy Kills 7 in One Family 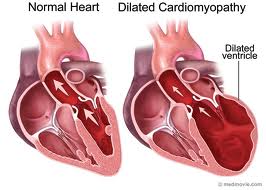 Let us make it simple.  Anyone who collapses needs two things immediately.  A 911 call for emergency assistance and CPR now.  The breathing will not be too helpful at all, but the sloshing of the blood will save your life and brain until help arrives and has a chance to restart the heart.

Most victims are excellent candidates for shocking the heart back into action.  Thus having the tools available at schools and similar situations is only wise.  Training available personnel is even better.

At least this spells out why we do have so many such events out there.  It is not just excessive training that kills athletes with an enlarged heart.

If your family has any history of sudden death outside the usual parameter for heart disease, it is wise to find out if you are at risk.  Then live your life in close association with others.  Alone in your apartment is not a solution.

Hypertrophic Cardiomyopathy Kills 7 in One Family

So far, Lisa Salberg has lost seven family members to an insidious heart disease, a medical mystery that took four generations of tragedy to unravel.

Her great-great uncle, an Irish immigrant, mysteriously dropped dead at the age of 19 in a iron mine a century ago. At 50, her great-grandmother died of "dropsy" -- an old-fashioned term for the accumulation of fluid associated with heart failure.

Salberg's grandfather had a heart murmur and died at 43. Her father missed a date with her mother because he had to administer CPR to his dying father. Salberg's aunt died at 36 of "the flu." Another aunt died of a stroke at 52. And an uncle died of heart failure at 48.

Fast forward to the mid-1970s: Salberg's sister Laurie was properly diagnosed with what looked like the cause of death of so many in her family, hypertrophic cardiomyopathy (HCM), or an enlarged heart.

Her death in 1995 hit Salberg the hardest, as she struggled to raise Laurie's children along with her own newborn daughter.

"I don't know how many there are, but we are dropping like flies," said Salberg. "The pieces came in dribs and drabs, and it took years to get the information imparted. There was no connecting the dots."

"It affected generations of people and it's everywhere in my family," said Salberg, 44, who got her diagnosis in 1979.

Salberg's now 17-year-old daughter, as well as Laurie's children, her niece, 28, and nephew, 30, also have HCM. Several cousins also have the disease.

Cardiomyopathy is a familial disease that primarily affects the muscle of the heart. With HCM, the normal alignment of muscle cells is disrupted, a phenomenon known as myocardial disarray. It also causes disruptions of the electrical functions of the heart and, depending on whether it obstructs the outflow of the heart from the left ventricle, can be obstructive or nonobstructive.

HCM is an autosomal dominant genetic condition, which means the mutation only needs to be passed down from one parent. Because cardiomyopathy is a spectrum of diseases, each person is affected differently.

The disease is "actually pretty common," affecting about 1 in 500 Americans, said Dr. Sripal Bangalore, assistant professor in cardiology at in . An estimated 600,000 Americans are living with the disease.

"A lot of people walking around lead a normal life into their 70s and 80s with no problems," he said. "At the other spectrum, young athletes die while playing sports."

Often there are no symptoms, so the disease is diagnosed by evaluating family history. Children at risk should have an echocardiogram to see if the heart muscle is enlarged. That must be repeated every five years until adulthood and is not always conclusive. Many doctors do not recommend genetic testing because of its complexity – there are more than 1,000 genes associated with cardiomyopathy.

Treatments may include medications like statins, beta blockers and calcium channel blockers; surgery to burn away the thick part of the heart muscle; and implanted defibrillator devices.

HCM is best known as the disease that strikes young athletes in their prime. It gained attention in 1990 with the death of 23-year-old Hank Gathers, a basketball star at in .

According to a 2003 review published in the New England Journal of Medicine, HCM is the leading cause of sudden death among athletes, accounting for roughly a quarter of deaths.

But it more commonly causes sudden death off the athletic field, according to Salberg, who founded the New Jersey-based Hypertrophic Cardiomyopathy Association (HCMA) to raise awareness of HCM and provide support to those with the condition. For 17 years, Salberg has connected families with leading researchers at academic hospitals and medical centers nationwide.

In the alone, approximately 250,000 people die every year from sudden cardiac arrest, according to the Centers for Disease Control and Prevention. Approximately 10 percent of SCA events occur among people less than 40 years of age.

Most die in schools, work places and at home, far from hospitals with lifesaving equipment. Salberg has spearheaded successful legislation in to get CPR and automated external debrillators (AEDs) in the schools and supported national efforts for sudden cardiac arrest drills.

Salberg and NYU's Bangalore don't recommend universal testing of athletes, although those diagnosed with HCM should avoid vigorous activities.
"If you screen 10 to 15 million people, it's a big cost," said . "It's not a cost-effective strategy. The number of young athletes who die is small -- less than around 100."

Salberg first knew she had a heart condition in the seventh grade when she lined up to be routinely evaluated for her hearing and scoliosis.

"I get up to the front and a [doctor] sitting on a stool stops and looks up at me with horror on his face," she said. "He told the nurse to clear the room, and all the girls stood back. He had me squat and stand and says, 'Listen to this.' Immediately the nurse told me to sit down and call my mother."

The doctor had detected an abnormal heart murmur. In only 25 percent of all cases of HCM such a murmur will be present.

Soon, a cardiologist diagnosed her with the same disease as her brother and sister. He didn't give her much hope, telling Salberg, "I could die any moment -- though I looked fine."

At the time, "there was nothing out there to save me," she said. "I wasn't given any treatment."

Salberg ignored symptoms such as chest pain and dizziness.

"On at least two occasions I nearly passed out," she said. "And I didn't mention it to anyone at the time, because it wasn't as important as going on Saturday afternoons to the roller rink.... I have no idea how I was lucky enough to survive."

At the age of 21, she had a "full-blown stroke," and today has residual paralysis." Soon, her sister's health also declined with increasing arrhythmias.

"[Laurie] spiraled out of control and we were told she was in heart failure," said Salberg, who at the time was eight months pregnant with her daughter. "I promised to take care of her two kids."

"Standing next to Laurie's bed, watching her struggle for breath, I wondered if the baby I was carrying was also affected," said Salberg. "I thought, 'I can't die now -- I am too busy to die.'"

After suffering heart failure herself after the birth of her son, Salberg began to search the Internet, "looking for answers."

"We've saved thousands of lives helping people get identified and are now working on legislative approaches."

The association offers a tool to determine who in the family might have HCM and how to assess for risk of sudden cardiac arrest.

"Our knowledge changes day by day, and you have to maintain follow-up and be educated," Salberg said. "The patient needs to know the risks over time."

Today, Salberg, her daughter and her nephew all wear an implantable cardioverter defibrillator (ICD) that can shock a failing heart back to life. They are also on medication.

Salberg testified for a 2007 task force report in which three of the nine recommendations were turned into legislation called "Janet's Law," which was signed into law in September. It requires that every school, public and private, be equipped with an AED. Schools must also establish emergency action plans for responding to sudden cardiac arrest events and training for school officials and coaches on how to operate AEDs.

The new law was named for Janet Zilinski, an 11 year-old who collapsed and died of sudden cardiac arrest in 2006.

Salberg is still pushing for drills to educate students and school responders. "We are not prepared for cardiac arrest when it happens," she said. "It's the most common way to die, and we don't drill for it. ...We have fire drills and armed invader drills. You are far more likely to have a child die in a school from sudden cardiac arrest than from a bullet or fire."

Salberg recommends that insurance pay for routine pre-certification physicals for athletes that are typically done today in schools, but not for universal testing specifically for HCM. She agrees with the medical experts.

"There is a lot of talk about athletes and sudden death and it's a complete and utter myth to go down that path," she said. "Eighty percent of the kids we lose under 24 are non-athletes. It's no panacea and even if you screen all high school students, there are false positives and false negatives.

"You are taking the resources away from those who need it, giving it to those who don't."