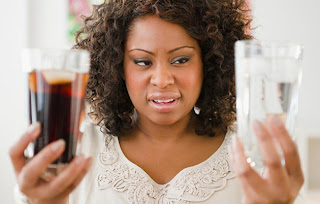 Aspartame continues to be contraindicated but this item is the most compelling argument that I have seen.  In the past I have posted that there is a solution if we must drink sweetened water.

It consists of sufficient stevia, a grain of sucrose to eliminate any stevia after taste and sufficient glucose to provide safe energy.  Otherwise, slightly impure glucose will work fine with a bit of stevia.

Recall that five percent of sweetening in is Stevia and that is huge, so we are not lacking the knowhow.  All the above is natural and safe and with a vast pedigree.

In the real world, the sugar lobby will lose several percentage points of its market and we will lose the primary driver underlying childhood obesity in particular.  How do you want to fix this?

The first American beverage company that gets on this band wagon is going to decimate its rivals.  This is a true new coke formula.  The key though is to not be afraid to sell stevia sweetened glucose as an energy drink which is why most drink the stuff.

Glucose is safe simply because it passes directly into your bloodstream for direct energy.  And anyone breaking a sweat needs an easily available source of energy.

Study: Diet Soda Increases the Risk of Diabetes. Why Do We Still Drink This Stuff?

Yet another study confirms what people have been saying for ages: Stop drinking diet soda. Like, right now. Drinking just one 12-ounce can of an artificially sweetened fizzy drink per week can increase your risk of Type 2 diabetes by 33 percent, French researchers found. And given that most people don't stop at a single weekly serving, your real risk for diabetes could actually be much higher.

The study, which was announced Thursday and will be published in the American Journal of Clinical Nutrition, was conducted by France's National Institute of Health and Medical Research and covered 66,118 middle-aged women whose dietary habits and health were tracked from 1993 to 2007.


Diet Soda May Be Making You Fat

The results were unexpected. Though it's well-known that people who consume a lot of sugar are more likely to develop diabetes, the researchers found that participants who drank "light" or "diet" soft drinks had a higher risk of developing Type 2 diabetes than those who drank regular, sugar-filled sodas. Those who drank 100 percent natural squeezed fruit juices instead had no additional risk.

Women who choose artificially flavored soft drinks usually drink twice as many of them as women who choose regular soda or juice—2.8 glasses per week compared to 1.6 glasses. "Yet when an equal quantity is consumed, the risk of contracting diabetes is higher for 'light' or 'diet' drinks than for 'non-light' or 'non-diet' drinks," the researchers, epidemiologists Francoise Clavel-Chapelon and Guy Fagherazzi, said in a statement. Women who drank up to 500 milliliters (about 12 ounces) of artificially sweetened beverages per week were 33 percent more likely to develop the disease, and women who drank about 600 milliliters (about 20 ounces) per week had a 66 percent increase in risk.
Drinking sweetened beverages increases the risk of becoming overweight, which is itself a risk factor in developing diabetes. But the study didn't find that the results were the same even among overweight women. So how can artificially sweetened drinks be making the problem worse if they're fat- and calorie-free?

"With respect, in particular, to 'light' or 'diet' drinks, the relationship with diabetes can be explained partially by a greater craving for sugar in general by female consumers of this type of soft drink," the researchers explained. "Furthermore, aspartame, one of the main artificial sweeteners used today, causes an increase in glycaemia and consequently a rise in the insulin level in comparison to that produced by sucrose."

Translation: Drinking artificially sweetened drinks makes you crave other sweet things (hello, chocolate!). And your body reacts to aspartame—also known as NutraSweet and Equal—much in the same way that it reacts to plain old sugar.

According to the American Diabetes Association, about 25.8 million children and adults in the have diabetes—about 8.3 percent of the population. The disease is the leading cause of new cases of blindness in people age 20 and older, and can also cause heart disease, stroke, high blood pressure, kidney disease, and damage to the nervous system. Type 2 diabetes—which can be controlled by diet and exercise rather than a daily insulin injection—is the most common form of diabetes in the .

The study's authors cautioned that more research was needed in order to prove a true causal link between diet sodas and Type 2 diabetes. "Information on beverage consumption was not updated during the follow-up, and dietary habits may have changed over time," they admitted in their report. "We cannot rule out that factors other than ASB [artificially sweetened beverages] are responsible for the association with diabetes."
Posted by arclein at 12:00 AM