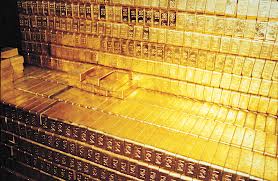 This story has been evolving for a long time. Essentially there is excellent reason to conjecture that the gold in Fort Knox in particular has been outright looted by the substitution of a large number of gold bars with tungsten adulterated bars. I can assure you that this can be made to work and it can even be set up to pass appropriate tests with a compliant assayer who knows where to drill. Google this blog to pick up the earlier posts putting this all together.

Knowing this, and knowing that the Chinese are wise and by implication so are the other central banks, it has not been too difficult to understand their present movements and that of the Fed. In a way it resembles high comedy.

Here we have a well publicized exercise in formally assaying gold held outside the US reserve while omitting to name the actual owners or that it is outside Fed management anyway. It almost gives the illusion that it is business as usual and all very positive. We must confirm every ounce.

In the event, it is worth recalling that the USA is a significant gold producer in its own right and reserves are way less meaningful.

This story has not become hot enough to force an actual audit of Fort Knox yet.

Get Ready for Some Major Disinformation about America's Gold

An audit of the gold held at the New York Federal Reserve has been completed and the disinformation campaign has started. Notice how LaTi reports the story:

The U.S. government’s gold in New York is safe in a vault underneath Manhattan, and some of the precious metal there is purer than previously thought.

The problem with this is that the gold held at the New York Federal Reserve is not "The U.S. government’s gold." It is gold held, for the most part, by the Federal Reserve for foreign countries.

That’s according to a first-ever audit conducted last year by the Treasury Department of U.S. gold on deposit at Federal Reserve banks in New York and elsewhere.

This is curious because it is the government conducting the audit.  That's like having Bernie Madoff's brother auditing Bernie's customer accounts. Why wasn't an independent auditing firm brought in? And since the gold is held for countries like Germany, why didn't Germany and others who have gold on account get to pick the auditor?


Here's more LaTi disinformation, which misdirects from the above important questions:

As part of the audit, the Treasury tested a sample of the government’s 34,021 gold bars in the New York Fed’s vault five stories below Manhattan’s financial district, according to the inspector general’s office. Auditors drilled tiny holes into the bars to remove samples that were tested for fineness in a process called assaying.

In three of the 367 tests, the gold was more pure than Treasury records indicated, according to the Treasury's inspector general. As a result, the government notched up the value of its gold holdings by approximately 27 fine troy ounces – or about $43,500, based on gold’s market value Monday.

Then LaTi tells us this:

The audit of the Fed gold came after 2012 presidential contender and former U.S. Rep. Ron Paul (R-Texas) questioned the central bank's gold holdings. While he was in Congress, Paul questioned whether the New York Fed had loaned or otherwise encumbered U.S. gold in financial arrangements, and he advanced a bill that would have required a full assay and audit of the country’s gold reserves.

But Dr. Paul was most concerned about "the country’s gold reserves," which is different from what is held at the Fed. The country's gold reserves are held mostly at Fort Knox, which no one is allowed to see, much less audit.


Then we have two more paragraphs of disinformation:

The New York Fed holds 99.98% of the U.S.-owned gold bars and coins in the custody of the Federal Reserve. The rest of the gold is on display at Fed banks in cities such as Richmond, Kansas City and San Francisco.

Unlike Fort Knox, the NY Fed gives tours of its vaults, so Americans can see the gold of other countries, but not US gold.

Bottom line: This audit was designed to confuse. Expect more stories about how the Treasury conducted and audit of US gold. Not true. Fort Knox gold, where America's gold supposedly sits, is off limits to all and has never been audited.

Again, the gold held at the New York Fed is mostly gold held for foreign countries. It does not belong to the Federal Reserve or the United States government. LaTi after misdirecting throughout the full story, ends with the limited truth:

The vast majority of the country’s gold reserves is held elsewhere, in Fort Knox, West Point and Denver.

Of course, the full truth is this gold has never been audited and unlike the NY Fed, which provides tours, there are no tours of the Fort Knox gold.

Bottom Line: The audit of the NY Fed gold will be used to deceive and give the impression that the gold supposedly held for American's has been audited.
Posted by arclein at 12:00 AM